Welcome to the homestretch of National Blog Posting Month. We have accomplished a lot, have not we? Nearly thirty posts pressed together, doubtlessly boring my ones of readers with their sheer manyness. Like if you're my friend, and I send you one nice juicy email, that's probably kind of a treat. But if I do it thirty days in a row, you're probably like, okay, Tina. We're all caught up. If I send you thirty emails over the course of thirty years, however, you'll treasure each one a little more. Next time, I'm going to do National Blog Posting Thirty Years.

That said, let's take a look at my favorite of all of Finn's little books. 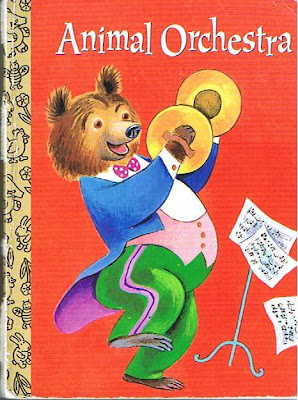 Animal Orchestra. It came out in 1958, and it's got all the wit and style of its era. Subtle pleasures abound in here! Okay. So, the premise is, it's Musical Day in Animal Town and the town orchestra is going to play and it's very exciting for everyone. I'll just show you my favorite bits. 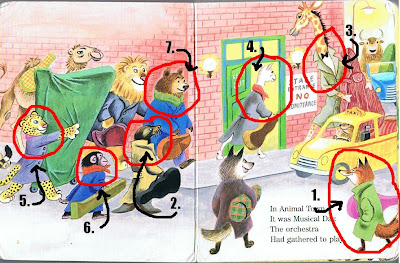 Man, I love these nattily dressed musicians heading in for the show. The fox, the seal and the giraffe are all working the collar-up look (figs. 1, 2 & 3) and the llama, monkey and leopard are all sporting elegant, colorful scarves (figs. 4, 5 & 6). I want to give it up for the bear's scarf (fig. 7), but I just can't quite do it. That's a muffler. A muffler is a much smaller sartorial risk than a scarf that looks like it was tied by a Frenchwoman. In fairness, I can't see how the leopard's scarf is tied, but his scarf makes the cut because it's fucking Schiaparelli pink. 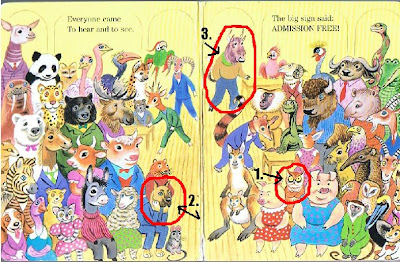 All right. Here's the audience waiting for the show. The best guy on this page is hands-down the owl (fig. 1). Can you believe how skeptical this motherfucker is? I love it. He's like, everyone is telling me this orchestra is very good but I will believe it when I see it. I could be at home reading Trollope. I also love the Great Dane (fig. 2). This guy is a serious fan. He's a classical music lover and he looks like he's getting into a nice meditative state to savor the evening's offerings. It's also interesting to note that most of the animals are wearing clothes, but some species tend toward nudity. The birds are all nudies, and so are the reptiles. And some of the mammals are like, well, if no one minds, I will also be nude. The baboon, for example, and the mouse. But I just want to give props to the moose or whoever that is (fig. 3) for wearing another of those fabulous scarves. I love men who have the balls to wear scarves. ("Men".) 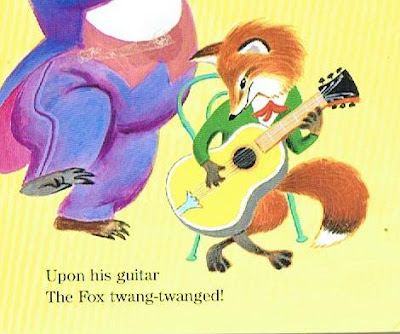 I just think this fox has got it going on. I love how he's perched on the chair and getting into it. I bet this fox makes great time with the ladies. 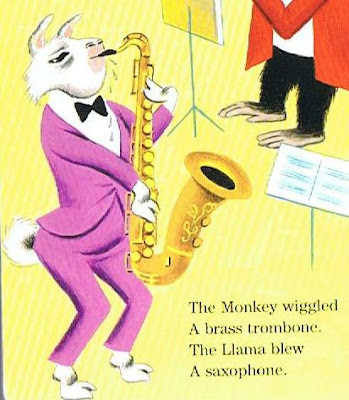 The llama! Come on, man. He's wearing a bright pink suit and he's spitting! Balls to the wall, llama. I salute you. 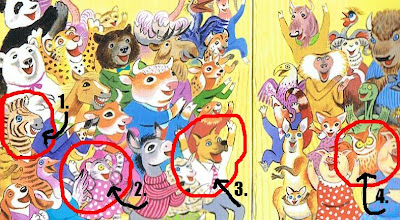 Okay, so the show's over and it was a smash hit. I love the zebra's grin (fig. 1). That guy is a cute patootie. And the manic look in that cat's eyes (fig. 2) is great, too, I think. You know she's going to go home and write a letter to that fox about how she's the president of his fan club. She appears to be underage and so I hope the fox acts responsibly. It's tough to predict. And (fig. 3)the Great Dane! You'll notice in the previous audience picture that he's got a jacket on. Well, he threw it to the wind! It's gone. It's not on his lap. It could be on the back of his chair. But he also could have eaten it, because he is letting it all go tonight! The evening was everything he thought it was going to be. And best of all once again is the goddamned owl (fig. 4). He is a convert. Enough said. 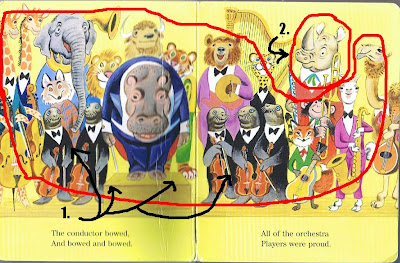 Finally, I want to give a shout out to the orchestra itself. The text (if you can't read it) says:

The conductor bowed, and bowed and bowed.
All of the orchestra players were proud.

I love how just about everybody is letting their pride show on their faces (fig. 1). They're all smiling and bright-eyed. But the Rhino (fig. 2), God bless him, is all dignity. He's a professional. He's not going to show it. He probably thinks he just did his job, and these accolades maybe embarrass him. But you just know he's going to go home and weep into his pillow because of all the love that came their way. There's something behind his eyes that makes it look like he's just barely holding it all together. Rhino's gotta learn to let people in. I love him.

The rhino's eyesight is very poor, but his sense of smell is very keen. He is smelling the applause. It smells like victory.

God DAMN, Tina. I just giggled for 5 minutes straight, and it felt GOOD. So good, I also may have eaten my jacket.

"The Llama blew A saxaphone."

And also, perhaps, squared one off into the seat of his nice pink suit?

So, in the first picture of the audience, you said you had to give props to the Moose or something wearing a scarf.

I am positive it is a warthog, which makes it even cooler to me that he is rockin' a scarf.

Oh man, I was crying I was laughing so hard at that one. Good show, Kunz, good show!

I cannot even stand how much I love this and wish I had done it myself. I have a (way less funny) version of these comments running through my head when I read weird books to my kids. I tweeted this. I posted it to FB. I cannot love this more. Thank you!