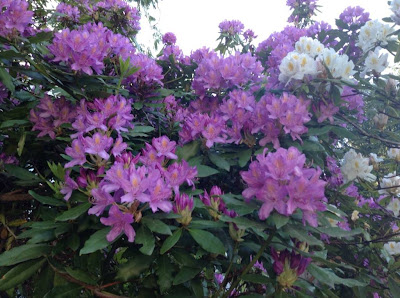 I’m sitting at the pharmacy waiting to pick up some medicine for my brother. An old woman with a white ponytail in a bright coral sweater and pants sits down next to me and exclaims, “Oh, it’s nice in here!” I look over at her and she elaborates to no one in particular, “I thought it was so dim but then I took off my sunglasses and now it’s really nice!” The handsome young pharmacist calls out a sing-song “Hi, Roseanne,” and she sighs and says, “You people know me here. It’s so nice. You won’t let me die!” He laughs and assures her, "We’ll always give you your medication.” Then Roseanne gets up and has a bit of a one-sided tête-à-tête with him. (Her tête is all the way in the game, he’s phoning it in a little by necessity.) I want to sneak up close and hear every word because I’m clearly missing good stuff. Some poor girl she knows isn’t having much sex with her husband, I pick up that much, and “It really is a shame”, and then Roseanne says, “I was lucky. I had a fantastic guy. I was worried that he wouldn’t want me because I couldn’t have kids, but I told him that, and well, he married me anyway. And guess what? We were so busy running around that we never got around to it! And now he’s dead. Why did he die? Why did he have to die?” You have to understand that Roseanne’s sunshine wasn’t dimmed when she was asking this; she was just plain wondering, like maybe the pharmacist had the inside line on death in general.

I wander outside in the early evening, under the tall rhododendrons. As soon as I get up close, I see it. There’s no other way to put this; the bees are fucking those flowers so hard it’s startling. And it’s everywhere. Every single purple-pink bloom gets hit by a sex-drunk bee overtaken by the spirit of Prince, going for broke. Showy, unselfconscious thrusting. Bees may be struggling the world over, but not now, not in my yard. Pure triumph.

Driving home from the grocery store, I see a crow flapping frantically, taking off into the air from the sidewalk. In his mouth is a huge hunk of Dick’s Deluxe cheeseburger, still halfway in its orange foil wrapper. GOT IT NOW MOVE MOVE MOVE!

It’s the first time Dave and the kids and I have gone to the beach since I got sick and got better: something I fantasized about so often, something that seemed so out of reach for a while there. And now it’s right in front of me. We never end up at Golden Gardens when the temperature’s exactly right - we end up sweaty and burned or windblown and chilled - but this time the weather is spot on and stays there. We go on the spur of the moment so we have no beach supplies or spare clothes for the boys. Fred is wearing black jeans that get heavier and heavier as the water line travels up his legs, and his pants descend inch by inch under the weight.

We walk all the way to the end of the beach, which we've never done before, but we're lingering extra long today. What have we been thinking? The far end of Golden Gardens is the money stretch. The shore turns from rocks to soft, unspoiled dark sand, a little tree-rimmed cove away from the crowd. Finn writes our names in the sand with a stick. MOMY. DADY. FRED. FINN. A turtle is spotted and stalked for a while, a group of ducklings shrieked at and chased.

The afternoon is getting ready to tip into evening so we make for the car, walking along a grassy field scattered with constellations of daisies. Past the field is the playground, where Dave gives the boys a last hurrah, but at the end of the field fifty or so people are gathered on folding chairs, and a couple of guys in gray suits are shuffling in their spots at the front of a blue glass installation/backdrop. A young blonde woman stands ready to officiate. I’ve been up to my neck in contentment all afternoon, and now there’s going to be a wedding? That’s it. I invite myself, and sit on a rock at a discreet distance and watch. The guests are smiling and craning around in their chairs to chat, looking stylish. The light is deep sideways and golden by now, the air is that perfect temperature that’s barely noticeable on the skin and I'm just about in heaven. Then the opening notes of “Come On, Eileen” ring out over the field and I'm knocked all the way in. We're starting. The groom and his parents take their places. The world’s smallest functional ringbearer - who apparently just learned to walk that very morning - is aimed down the aisle in his tiny dark suit. Will he make it? Is he a strike or a gutterball? Let’s watch...he’s a strike! Everybody claps and cheers. Then the music switches to that Hawaiian version of “Somewhere Over the Rainbow” (which I usually can’t get with but today I’m all benevolence) and the bride appears at the edge of the field. She makes her way to her groom treading over those little daisy patches and I'm done for. The tears come. The beach gave it up for me hard today. I’m drenched in luxury.

It’s almost night-time. Fred’s been given a plate of dinner that he objects to. We’ve all moved on to other things, and then Fred storms into the room where Dave and I are hanging out and watching tv. He informs us with maximum grumpiness in his baby voice, “I’M NOT GOING TO EAT MY DINNER. I’M JUST GOING TO EAT THE CHIPS. BON VOYAGE, LOSERS,” and he stomps away. We wait until he’s out of earshot and then laugh until we’re crying, we’re dying, we’re dead.