it wasn't a beret, it was a cloche, and it was really more scarlet than raspberry 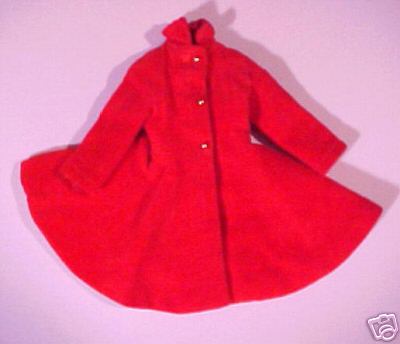 So in my dream last night, I was going for an interview to be Prince's personal assistant. We met at his little house. Dave came with me. I was wearing a snappy little vintage red wool coat and hat duo, a sixties sort of number. Prince came bounding out his front door and gave my outfit the once-over. He loved it! He grabbed my hand and we skipped inside with Dave trailing behind us.

The interview was in Prince's bedroom. Prince and I chatted for a second and then Dave came into the room. He didn't seem too pleased that the interview was going to be taking place in Prince's bedroom, but he tried to sort of make nice with Prince. He saw some scrapes on Prince's knee and gave him some advice about bicycle safety. Prince, on the other hand, didn't seem too pleased that my husband was taking place in his bedroom, so he was frankly quite chilly about the bicycle safety advice. Dave left us alone to conduct the interview, and Prince made an insulting comment to the effect that Dave was overly righteous or something. I said, that's my husband! You can't say things like that about him! This interview is over!

But it wasn't over. I was getting sucked into the black hole of Prince's sexy magnetism. 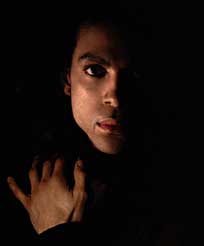 I summoned all of my strength and with some difficulty I pulled myself out of the bedroom of Prince. Soon thereafter I woke up.

Dave was a trooper. And Prince and I must never meet. 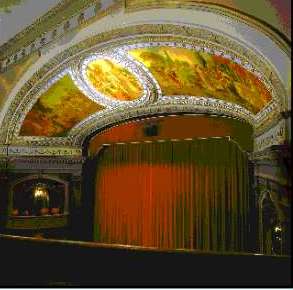 Oh, man. This loud, wrongly genteel drunken fellow in a tuxedo just knocked on our door and asked Dave to help push his car into a driveway. He'd left his lights on. Much retardedness ensued*, involving Tuxedo yelling at an off-duty cop** who told him that he wouldn't be driving anywhere tonight.

*including Tuxedo telling us we have a beautiful lawn. Oh, Tuxedo. You can say many things about our lawn, like "Why don't you cut it?" or "You must love dandelions", but you can't say it's beautiful.

**He accused the cop of being a serial killer and demanded to see his license number.

But my favorite part was when Dave left him. Apparently, Tuxedo said, "I'm the star of a play, and I'm going to bring some tickets by for you and your wife!"

I love I'm the star of a play!

Next time I'm in a play, that's how I'm going to tell people about it. With verve like that.

Right now, the Tuxedo's out on the street yelling HELP! HELP! to passing cars, trying to get a jump so he can drive on ill-advisedly out into the night. I bet those cars would stop if they knew he was the star of a play! 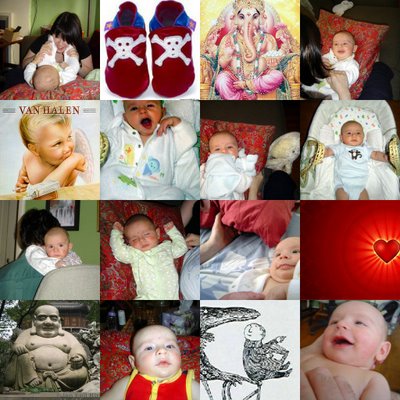 what it says where you can't read it 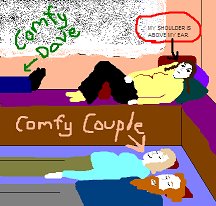 In this leftover picture from childbirth class, I'm saying: 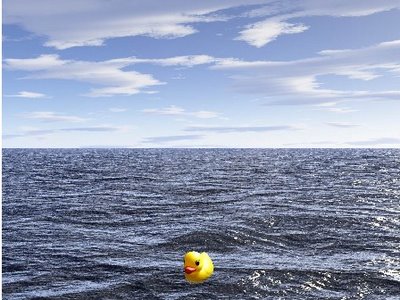 Dave just got this unbelievable fat poetry anthology called Legitimate Dangers: American Poets of the New Century. It's all poets born after 1960 who have published three or fewer books. Hot! Hot hot!

Here's a poem that's apropos for us these days, by Patty Seyburn:

There is a duck lost at sea when
his crate breaks after the boat is
destroyed. Tossed, overturned,
claimed and buoyed by a frigid
ocean, he observes the moon and
stars, knows loneliness, isolation
and lack of purpose. He wonders
if he'll find a home. There is a
monkey who makes countless,
thoughtless errors and manages
to redeem himself with friendly,
anonymous counsel. He makes
great messes and never seems
to gain an awareness of what
others endure on his behalf. He
is not held accountable for his
mistakes. A royal elephant has
appropriate adventures and an
extended family. A huge dog
with morals means well but his
size often inhibits his ability to
reach his goals. He frequently
learns to compensate for his errs
by giving rides, providing shelter,
protecting the meek. There is a
mouse with balletic grace, while
her tiny cousin has nothing but luck
and the charm of the weak: you
can't choose your family. There is
another mouse, crudely drawn in
primary colors, whose exploits are,
at best, prosaic. She keeps company
with an elephant, an alligator, and
a female of ambiguous species.
She drives a bus, cleans house,
bakes gingerbread, takes a bath,
attends the fair. She is middle class.
And yet another mouse, with many
paid friends and a girlfriend, sister
or cousin, also paid. They used to
keep silent but have, of late, learned
language, which has increased their
popularity but drained the pathos
from their exploits. A company of
pigs, an obdurate spider, a ravenous
caterpillar that endures change and
sheep: lost, defiant, naked. The duck
story is somewhat true except that
we are given the duck's perspective,
which must be questioned, as we have
no small stake in believing that we
are the only ones who understand
that we exist, with little notion of why.

Finn sometimes will cry out briefly in his sleep, and I wonder if he's having a bad dream. I hate the idea. He's too little for a bad dream. And what would his bad dream be? Does it have to do with daily, earthly baby concerns? Does he dream he's stuck in a terry cloth sleeper soaked in baby cheese? Does he dream that he's thirsty for milk and facing a frustrating empty breast? Or does he have dreams of some complicated, more adult-feeling before-life? Does he miss where he came from? Does he have friends he left behind, wherever he was? Does he dream of being large and articulate and powerful, or does he dream about some former articulate glory? The little cry is so brief, but so pained. It rips pieces off of my heart and eats them.

oh my god bear with me 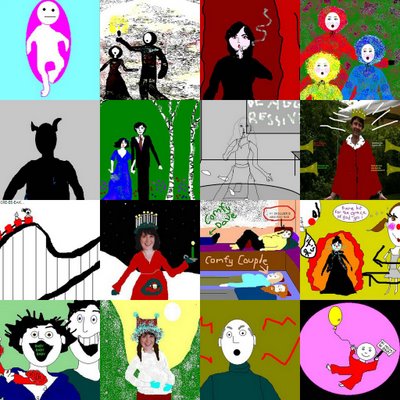 Picasa, I tell you! It's the joy. You can do all these things with your pictures. This is like quilting! (Yes, for those who can only make but the simplest quilts. It's not like quilting if you're one of those hotshot Devil-Went-Down-To-Georgia-Not-With-Fiddles-But-With-Sewing sorts of quiltmakers. It's like quilting if you can only sew squares together.)

These are all blog pictures I made. Some of you will be like, YEAH. I'VE SEEN THOSE. MOVE ON. And I will. But I want to point out that the picture that's second up from the bottom on the second-to-right-hand column is a picture I worked hard on for an entry about my childbirth class that Blogger wouldn't post. (The picture, that is. The entry posted. Fffff.) So, look at it. LOOK AT IT! That's what it was like in there that first day when I couldn't get comfortable for the relaxation exercise. Oh, Christ! Lord! It feels so good to finally get it out there. That's what it was LIKE.

Thank you. No more collages for at least...two days. 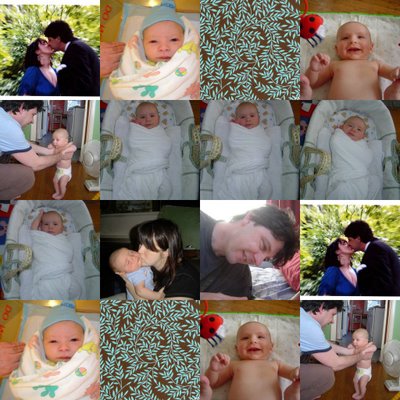 Some guy that's on a poetry forum with Dave sent him a message asking him how things were going with Quinn.

Things with Quinn are going great.

This morning I was holding him in a pillow in my lap, sitting him up so we could be face to face. He'd scratched his face up because I hadn't had the balls to cut his nails in a while. One of his scratches is right around where his third eye would be, giving him a vaguely Hindu look. And he looked so wise this morning, I felt like I was holding a tiny teacher in my lap. We had a conversation. He was very serious with me - Finn is often very serious with me, when we talk.

It's sort of odd, referring to him as Finn. We almost never call him Finn. We refer to him as:

*Muffin
*Muffins McGee
*The Squizzler
*Mr. Squizzles
*The Buddy (as in, "Will you look after the buddy for a minute while I run to the bathroom?")
*Cutes McGoots
*Muggy Wuggins
*Lovey Buggy
*Mr. Fartybottom

It's all dignity, all the time around here.

So we were having a conversation this morning, wherein he would make a noise and I would say something encouraging like, "Tell me more!" or "You don't say!" or "Wow! And what else?" or "I'm listening!"

And then it occurred to me that I wasn't really listening. I was just pausing. So I tried to really, seriously listen. Listen underneath his face, his head, his body, underneath us in the room. It was like trying to stay underwater while wearing a suit of floaties. I kept bobbing up to the surface, where I can't really hear him. I feel like there's a place underneath us where if I can stay down there long enough, I can hear all of his meaning without the bother of the English language getting in the way.

So I bobbed around up there and tried to be heavy and sink into the silence while I waited for him to speak. His face shifted from regular baby to something like a world-weary Tibetan, and he offered up the word "bllrrr" in a cushion of bubbles.

I wish I knew what he meant.

Finn was in his Moses basket this morning wrapped up in his white swaddle blanket. Dave looked down at him and said, "We should scoot him over to one side and fill up the rest of the basket with Red Robin fries." He was too right. He totally looked like an order of Finn and chips waiting to be completed.

In other news, my feet keep slipping around underneath me today. I think somebody snuck in last night and replaced our floors with an ice rink or a raked stage.

Also, just you wait. I'm going to take pictures and show you the hilarious thing Dave does with Finn. I hope its hilarity translates! It might not. But it might! But it'll only happen if stupid Blogger lets me post a goddamn photo*.

what i got for my birthday forever 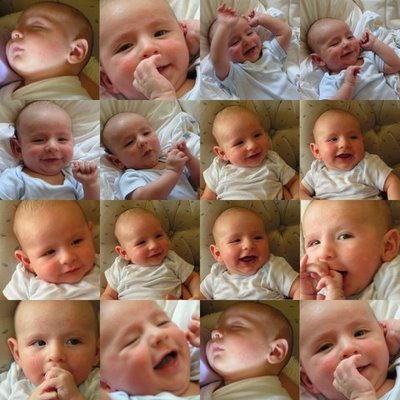 I found this list in a closet we cleaned out the other day. Apparently, years ago I wanted to write a story. I didn't know how to write a story, or what one might be about. So I made a list of things I could write a story about.

Let me preface this by saying, I WILL NEVER WRITE A STORY. I am not made to be able to write a story. I can tell you things that have actually happened to me, those kinds of stories. But I can't make up a story. I can't write a play, either, with characters. I've thought about it. This is the best play I could write, right here:

Isn't that great? It has conflict. Now, here's the list of story ideas I found:

*I didn't mean that they literally explode. I meant that they blow apart emotionally and then geographically.

There. There they are. What might have been. I could have been a contender. Alas.
Posted by Tina Rowley at 3:06 PM 7 comments: