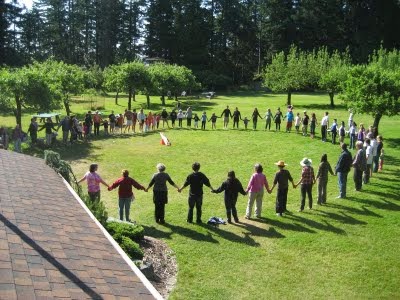 The first sip of beer doesn't count, the one that happened at the dinner table when I was seven. That wasn't me drinking; that was my dad amusing himself, and I gagged on cue. No, the real one came right after I turned 13, in the summer of 1982*.

I'm up on Orcas Island with my family, staying as we always do at Camp Indralaya, which is a Theosophical camp my grandparents founded with some other folks back in the '20s. This isn't a kid's camp. This is a grown-up camp...oh, hell, here's the link. This is Indralaya. And it's ours, it's in our blood. We've gone every summer, have since birth, just like my dad did, since his birth.


I really want to jump to that first beer. There's a magnetic pull. I don't feel like saying who I was with or how I got there yet. I want to skip the set-up and go straight to the can of beer, to the opening in the can of beer, that little rounded black hole after I'd popped it open with that exciting thock. I looked at that opening for a long while before I took a drink. Or maybe I didn't, maybe I didn't hesitate, maybe I threw it back. Maybe I'm just slowing down the clock now to see what was happening. I'm going to come back to the opening in the can a little later. It's important. It's a portal: a tiny, black, Alice-in-Wonderland swimming hole that led somewhere I couldn't really return from, and didn't really want to.

But let me pan out first. We're up on Buck Mountain on a semi-clear night, away from Indralaya. A group of more advanced teenagers and I have snuck off from camp in the back of a pickup truck, and we're parked off a little dirt road. We've climbed out of the truck and we're sitting in ones and twos and threes on various rocks on the mountain slope, our view unobstructed: lots of stars, some clouds, the dark outlines of trees, the vague, murky shapes of other islands. We've got a flat of warm Rainier beer, and no plans but to sit here and drink it. I'm on a rock by myself, Jamie McGrath has just handed me a can of beer, and I've taken it from him, all casual, like I've sat on the sides of so many mountains with so many teenagers and so many cans of beer that I've lost count.

And there it is in my hand, the can, warm and sleek and shiny. My own to do with as I please. This is momentous, more momentous than pure transgression. I have a choice in front of me. I mean, I've already made it, but this can of beer is going to cement it.

I have to give you background, but I keep rebelling. I have to tell you more about Indralaya and more about my family to get you where we're going, but I don't want to. It's not easy for me to talk about Indralaya. I loved it so much in my childhood, but something started to curdle for me there.

Here's what you need to know for now, bare bones:

1. You need to know about these two. 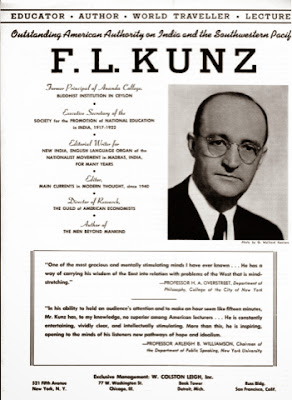 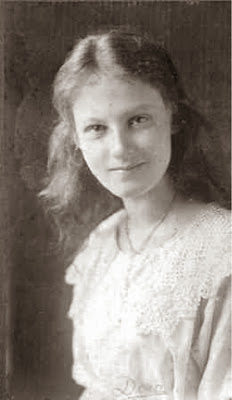 Those are my grandparents, Fritz and Dora. I didn't plan to write about them tonight—I really just wanted to write about beer—but they've inserted themselves into the narrative. What you need to know is what huge figures they were, not just in my family but in our family's larger social world. Granny was a famous clairvoyant and healer and all-around terrifying figure, for me at least, and Papa was a massive intellect and ultra-idealist (who died when I was two, and so disappeared into a cloud of legend), and both were major figures in the Theosophical Society. Niche stuff, doesn't mean anything to most people, but Fritz and Dora may as well have been planet-sized in our little domain. At Indralaya, they were pretty much gods.

2. You need to know that at Indralaya, and in my immediate family, the overall atmosphere was serious. Theosophists were serious-minded, spiritual, refined. I'm conflating the two—Theosophists in general and my family in particular—to give you a quick flavor. Vegetarian food, PBS, classical music, dusty talk of classical Buddhist/Eastern/esoteric texts. Nothing slowed-down or simplified for kids. You get on the ship at the speed it's sailing or you don't get on at all. My older brother, David, was a genius and dialed in to everything they were talking about, so he could ride with the adults at the dinner table. I was not a) a genius or b) interested, and so I could not and did not ride.

3. When we were kids, Granny thought David was the caterpillar's kimono, and that I was...who was I again? Two grandchildren, you say? She didn't attempt to hide her adoration of my brother and her distaste for/lack of interest in me. That's a drag with any grandparent, but with a clairvoyant one, you can develop a complex.

4. Last thing. And then back to my beer! To be a non-genius, unserious kid at Indralaya is fine, no big problem. If you're me, and your grandparents are Fritz and Dora, you eventually become conscious of a little extra eye on you to see if you're going to develop into something noteworthy/worthwhile, but until that kicks in, you're free to race around those eighty acres without a care. But the clock is ticking. Once I hit a certain age, there's going to need to be a reason for me to be there, a reason of my own.

Okay. I think that's enough to get you through.

So we're at Indralaya now, and it's the day leading up to the night at Buck Mountain. I'm in the meadow talking to a guy named Jonathan, who's 19 and foxy, with a burnished tan and curly dark hair of insubordinate length. He lopes around camp in a baggy t-shirt, cutoffs and flip-flops, and talks in the slow drawl of the perpetually stoned.

He says to me, there on the grass in the sunshine, "I like you. You're not like the rest of your family. You're cool."

The glow that spreads through me is unsayable. I've suspected/feared/hoped I'm not like the rest of my family, but nobody's ever presented that to me as a good thing. David and I are the heir and the spare, respectively. But now I'm hearing that I have some currency of my own! I want what he's saying to be true, in every way. I want to be cool. I don't need to be like my family. There's a glass ceiling for me in my family anyway that I'm never going to crack. I can feel it. I don't have the talent for it. This news is astonishing. I feel like a birthday candle that just got lit. The sun is setting, too, and everything's gone gold. I have something now.

And hurray, finally, we're back on Buck Mountain. My beer! My first can of beer, and its little opening.

Let me first say that it feels fucking fine on this mountain, away from Indralaya, under the stars. There's so much space around us. Space in both senses: what the night sky reveals, and room to breathe. Nobody is watching me. That's different from nobody seeing me/seeing too much of me, and it's good.

And now, my beer. If I do this, if I dive into that dark little swimming hole, with its sour, wheaty smell, that's it. I know that I'm saying hello to all kinds of things, trouble among them, scariness, but freedom. And I'm saying goodbye to something even more fundamental. I'm shifting my allegiance. I'm cutting a cord. I'm turning in my card. I'm leaving.

There's a little fear, and a little sadness. That was my family. Those were my people. But space, stars, distance. This feels better than anything. This is how to do it.

I think you're a genius. Are you sure?

Tina, I'm with Rebecca. This very moment I wish this was Chapter 1 in a book that I was holding, and that I wasn't at work so I could just sit and read it cover to cover.

Tina, you are so brave with your words...its a privilege to be let in your world via your boldness and trust. Thank you.

Yep, chapter 1, absolutely. I hope you're writing a memoir. And you are a genius.

You guys are the best. Thank you so much.

I just came across your blog. My Great Grandpa was Fred McLeran also spelled MacLaren. He was the original owner of the property which is known as Indralaya. My Grandpa must have known your Grandparents. I know he let his friends hold their group gatherings on his property and eventually he donated his property to Indralaya and he moved to the Mainland in the 1940's. My Dad is 92 and told me of the times when he was a young boy and would visit his Grandpa and they would have their gatherings and sit in circle....talk and pray and sing songs.