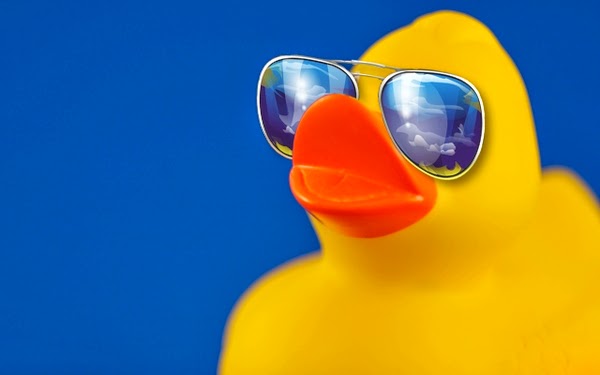 Preface: The author of this story said something to Facebook on Monday about how she's run out of everything to say as a writer, and about how she was going to move into a cave. Facebook exploded with innovative suggestions like how about write a story about a duck and you should put something in there about Perimenopausal Dry Eye and maybe it's a cool duck who wears sunglasses and really, it's not like we had a better idea. And so fuck it. Voila.

Once upon a time there was a duck, a cool one, who wore sunglasses. His name was, I don't know, Reggie. He didn't write fiction because holy crap, you gotta what, in addition to write well, you gotta figure out what everybody's gonna do and say all the time? Jesus. Who has the time for that? Who has the imagination? No, Reggie was sticking to nonfiction.

They turned into sunglasses when it got bright enough, see? I'm talking about his glasses, his sunglasses. They had that kind of special lens. Reggie didn't need glasses all the time. Just for driving and movies. He was nearsighted, which means he could see things that were near. He could see rice, and bugs, and paper clips. But road signs, not so much, or foliage, or details on the mountains over there, like crags and things. That was blurry. But he was a fucking nonfiction writer, so he had to be able to see, so he shelled out for these glasses. But he wasn't going to buy two pairs, a sun pair and a regular pair. Fuck that. On a duck's salary? No way.

What was he going to write about? Oh, man. Reggie put his head in his, well, they'd be wings if he's a duck, but does this all have to be so real? Hands, he put his head in his hands, and rested his elbows on the...I guess he has a desk. God! Where does it end? What else does he have to have? Fucking mise-en-scène. Wait, is that a cinematic term? Well, I'm borrowing it because he needs some furniture and shit, and maybe some meaningful objects. Props or whatever. Meaningful stuff that says who he is.

Who is Reggie? Who was he? He was wrestling with that. I guess that's why he became a writer. Reggie picked up the antique snow globe from the desk, in his hands, after he took his head out of them. The desk was a, what, a Chestershire. That sounds like something. Fancy. Reggie had money. (I mean, no he didn't. I just said up there about a duck's salary. Forget the fancy desk. It's not a Chestershire any more. He got it on Craigslist.) His mother gave him that snow globe. It was meaningful, and now he was looking at it, turning it over, making it snow in there, thinking. The scene in the snow globe was...ducks. Ducks by a...pond. That's why it was meaningful. When Reggie's mother gave him that snow globe, right before she died of an illness, she said, "Here. Never forget that we're ducks. Your grandmother gave this to me before she died of her illness, and I've never forgotten. You give it to your child when you die, if you ever have one, if you ever get married, if you ever settle down, which you might not do because you're so cool. Anyway, take it."

Reggie probably wasn't going to get married, but he did like kissing everybody. This duck was one smooth kisser. That's one of the things he thought about while he was holding that snow globe. He thought about all the women he'd been with. There was Shakira, that beautiful South American preschool teacher who taught law at Harvard. She'd been special. Then there was that baroness, the blond one from Austria who'd gotten dumped by that guy who fell in love with his children's nanny. There was that aerobics instructor. Do people still do aerobics? Whatever, the point is that she was pretty. And fit, I guess. But she was also smart, everybody. And specific. There were all these details about her background. She was real. Make it yoga. A yoga instructor.

He'd kissed them all, and some others, too. But that didn't mean he knew what he was going to write about. He got up from the desk, went over to his closet and changed his jacket from one cool kind of jacket to another cool kind. That usually helped. And then he went over to the kitchenette and poured some chips into a bowl. He liked difficult, spicy potato chips with a strong flavor, just like he liked his women. He ate flavors like Wasabi n' Tabasco, or Ghost Pepper n' Molasses. This time it was Flaming Licorice. So that ought to tell you something about him.

Action! It was time for some action. What was he gonna do, sit there all day eating these potato chips in his cool jacket? He hoped there would be a knock at the door, maybe some other duck that he could get in a fight with, or have a significant conversation with. He needed something to write about, something for his nonfiction.

I mean, he can go over to the window and look out there and see if the person or duck or baboon or whoever threw the rock is still out there, but what's he gonna do, chase after them? I guess he could fly. Ducks fly when they're under duress or something. I should have had somebody knock.

Reggie cleaned up the glass and, or, no, no, his butler did. His butler, Yates. I mean, Yeats. It turns out they did have money once. There was a butler left over from his childhood. A butler, sadly, with Perimenopausal Dry Eye. What a detail. That's pretty rich.
Posted by Tina Rowley at 12:39 AM

I really enjoyed this! All that mental re-write stuff is always the first to go when I attempt any writing, but I liked reading it.

Awesome! Or pretty cool. Or something....yes, something positive. ;)

"...he put his head in his hands, and rested his elbows on the...I guess he has a desk. God! Where does it end? What else does he have to have? Fucking mise-en-scène. "

This is so great!

"...he put his head in his hands, and rested his elbows on the...I guess he has a desk. God! Where does it end? What else does he have to have? Fucking mise-en-scène. "

What I meant to say was, THIS. This was my favorite part, along with the difficult potato chip flavors. I can sort of believe that ghost pepper and molasses chips exist, and you totally have your thumb on the pulse of what fuels nonfiction in duck society. Accolades and snowglobe confetti to rain in your honor!

And it took me the entire story to realize the butler was necessarily FEMALE! How conditioned was I to just accept the institutionalized sexism throughout the wasabi chips and snow globes!

I feel like this really illustrates writer-brain-syndrome in the narrative descriptions.

Sweet pic of a rubber duck with aviators, by the way.