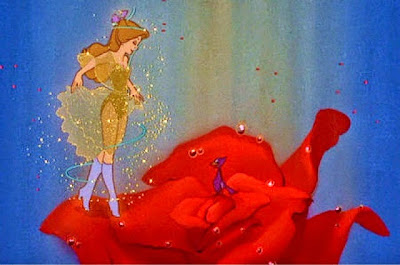 It's time for something light and refreshing. And so here, without further ado, is a small highlight reel.

Age 6: My crush Timothy Horton gives me (and probably everybody else) a valentine in class that's a box of all pink crayons. On the front it says "If you'd be my valentine..." and when you open it up it says, "I'd be TICKLED PINK!" My heart does a leap.

Age 7: My dad has brought a Simon and Garfunkel record home from the library. What the holy hell? We're a classical music household. Anything remotely rock has been outlawed all my life. The occasional folk music makes its way in sometimes; Peter, Paul and Mary is as extreme as we've ever gotten. But this record has Mrs. Robinson on it! Does my father not know what he's doing? This shit swings! I drop the needle down on Mrs. Robinson over and over, dancing around the living room dressed like a fairy in a sheer white nightgown of my mom's that she's donated to me permanently. She's cut off the hem all jagged for me, fairy-style. My skirt floats around when I dance. Simon and Garfunkel are singing "woo woo woo", which is what we say at school when somebody has a crush on somebody, so this song is even a little racy. I keep thinking somebody's going to come in here and stop me, but nobody does.

Age 7: We're driving from New York to Florida, heading to Disney World. I'm a hardcore Little-House-On-The-Prairiehead. I've read all the books many times over and I've been known to rock a calico bonnet on Monday nights when the show comes on NBC. My dad suddenly hands a book back to me from the front seat, where he's driving. It's a biography of Laura Ingalls Wilder. There are photos of the actual family and everything. I burst into tears. It's real. They're real. I feel like I'm shaking God's hand, a real hand.

Age 7: I get to stay up and watch Three's Company for the first time. It starts at nine. I've never watched a show this late. It's hilarious! Jack and Janet are gardening and Janet smacks a mosquito that's landed on Jack's arm. He yells OW and overreacts and smacks her or shoves her, as though he were saving her from something, too. I'm dying. Life past 9pm is something else.

Age 9: We have a huge, long laurel bush that edges our backyard. But I didn't know you could climb through the middle of it! The Harris kids across the street are butch and adventurous, unlike me and my brother, and all six of them come over and show us the gold we've been sitting on all this time. You go in one end and step from branch to branch in the middle and you can make it all the way through. Get a load of me! This is a physical kid thing, and I'm doing it.

Age 9:  I'm out on the lawn by myself at dawn in early summer, wearing a long plaid dress of my mom's, another dress-up donation. The garden is still wet with dew. There's a slight mist, but the sun has climbed above the horizon, and you can feel in the air that it'll be hot later. I'm pretending, and I don't even know what I'm pretending yet. I'm a lady. A lady on the lawn in the morning. It's enough. Everything seems 100% promising.

Age 10: It's my birthday, and we've gone on a picnic. We've driven out to the Cascade mountains and have followed a trail into the woods. It's cold and rainy, but it's still good. I've always been scared of the carbonation in soft drinks—it's too crazy on my tongue—but I'm feeling bold and so I try a can of 7-Up. Turns out I can handle it. I don't even want to tell anybody how proud I feel about that. I just walk around the woods, sipping.

Age 10: I dream that I'm walking down the street with John Ritter/Jack Tripper. We have matching navy parkas on and he has his arm around me. I guess I must be his girlfriend.

Age 10:  David and I turn off all the lights in the living room every Sunday night and listen to The Hitchhiker's Guide to the Galaxy on BBC Radio. The sky's deep blue out of the windows but not black yet. It looks like it could have aliens in it. It's perfect. Atmospheric. Zaphod Beeblebrox is cooler than anybody I've ever heard of, cooler than Fonzie, and the humor is so fresh that we laugh as much out of amazement as anything else. I experiment with my own radio dramas which have no script; a typical episode is just the sound of my own footsteps and me eating refried beans into the microphone.

Age 11: For my birthday, my cousin Michael takes me to see Xanadu and buys me the soundtrack, overruling my parents' objections on both counts. I've had friends slip me little bootleg cassettes of Abba and Olivia Newton John, but this is the first time I've had a record of my own like this, out in the open. The sound barrier has been broken.

Age 12: My parents are out of the house for a while so I sneak into their room and turn the TV on to the cable channel that doesn't have a picture except for being pale blue, the channel that plays the smooth rock hits of today—Air Supply, Hall and Oates, Heart, Christopher Cross. I get my dad's hidden stash of broken chocolate out of his drawer, along with one or two of his Playboys or Penthouses, and I push the envelope in all directions. I'm theoretically allergic to chocolate but I don't think so, myself—I think I've outgrown it—and anyway I don't care. It tastes better because I'm not supposed to. Everything I'm doing is better because I'm not supposed to. Someday I'm going to get to do everything I want. That time is coming. I can feel it.

I've become such a follower of your writing that I think I would listen to a radio show of you walking around and eating refried beans into the microphone.

Light and refreshing, or brutally dark...your writing, I'll take all of it.

Cheryl and Sal, your support is so lovely. I appreciate your presence here so much. Thank you.