a quick one while the captor is away 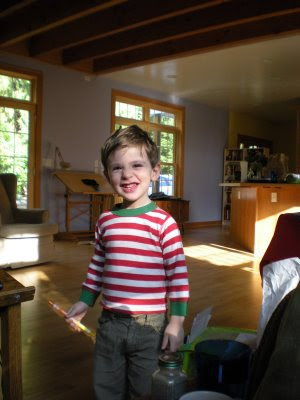 Beginning a post at 3:15 in the morning is so crazy that it just might work. The captor is surely napping. How do I know? I feel open to using prepositions. That's how.

Let's do a grab bag as I don't have long before sleep comes for me. First, let's look in the bag, and then we'll pull things out.

Finn's haircut: Jim Morrison has left the building, replaced by the president of the Young Democrats of Lake City. My son looks less dissolute (you know, for a two-year-old), more inquisitive. He looks older, taller and brighter. He's taking SHAPE on us.
Grab.

Dining room table: We have one now. It's wonderful. The soul of the house can now descend into place. A line runs through the great room from the fireplace through the dining table to the kitchen. Hearth, home, welcome, nourishment. I hope that many of you will come and sit at our dining room table with us and fulfill my dreams for this house. Photo to follow.

Raja yoga: This is a twelve-week course I'm taking, heading into its fifth week. A Raja/Hatha yoga intenstive. Raja yoga. What be? (Uh-oh. Captor waking?) (The captor is waking, but I will fight to use the English language as it was meant to be used. I'm on to me. Whenever I want to tell you about something beautiful and difficult to describe, I want to revert to cave talk. I constantly feel too shy to attempt to describe things properly.) Oh, listen. Instead of trying to tell you what Raja yoga is, I'll give you a link to the class description. There. Now I can tell you what I really want to tell you, which is how the class feels.

Like home. Like the sun coming up. Like weightlessness. Like my mouth curling inadvertently into a smile like a small boat which is gently pushed off shore. The lake is infinitely wide, the destination is far away. The boat drifts slowly, the current is soft but sure. There is no hurry, not the slightest bit. It's early morning on the longest, best day of my life. By nightfall I will be at my destination. The day can be as long as it needs to be, but this is the day. I have finally left tomorrow back on shore. The boat can get tangled up in seaweed, and I can slowly disentangle it. No panic. I can drift in circles for a while, stop and float. I can eat some of my picnic. Muffins under the noonday sun. I can row until my arms are tired and I want to cry, and I can stop to cry. Very fine. All right. My face will dry, my nose will clear, equilibrium will return. I will keep rowing, and drifting, and rowing some more. Today is the day, however dull, however thrilling, however sweet or painful. Today can last a thousand years but this will still be the day.

Baby wondering: Sleep wants to come and rescue me from talking about this one. Cave talk also wants to kick in. Defense mechanisms. And also it's almost 4am. Let me pose this one as a question.

Is there a baby remaining out there in the ether that belongs to us? If so, please report not only to my womb, but please report to my heart and mind and launch a campaign to win them over again. My next birthday is my fortieth. This feels like a wall or a locked door. Will someone slip in before we are up against it?

Grab - wait. Guess what? I am not pulling everything out of the bag. No more writing about writing or not writing, for one thing, is my new motto. The dining room table is sufficient talk of the house. And as far as the election goes, IT IS NOVEMBER FIFTH AND OBAMA WON.

Good night and good morning.
Posted by Tina Rowley at 3:12 AM 2 comments:

Email ThisBlogThis!Share to TwitterShare to FacebookShare to Pinterest
Labels: ha ha, hostage power, i snuck one in

proof of my own existence

My writing, I....I...what happened is I begin take my writing more seriously, like thing I...like a central fact of my life...like a thing I want do with all heart forever...and then...I...stop myself.

I hold self hostage.

I take me prisoner.

I hold me ransom.

To write like bad caveman is only way I get message to you from cave I hold myself hostage in. I no more good writing a while. I speak you without good writing, in order speak at all.

What happen in Gallivanting Monkey life? Let catch up bit.

Finn used to never name thing. Like give name. For toy. No thanks. I say, "What name this bear?" And he like, "JUST BEAR." Like, "Just drop it." I keep try. I like, "What name this donkey?" Finn glare or sigh, then, "JUST DONKEY."

No more Finn no name. Finn now fully freewheeling thing-namer. Freewheeling in extreme. And nearly all thing name have same ending in common: dge. "Finn, what name this rabbit?" "Chadge." "Chadge?" "Chadge." Later, "Finn, look this dog. What name, you think?" And Finn all, "Woodge."

Some lately names animals in picture books from Finn:

Finn no longer shy namer. He spread this to more language, also. In morning, he enjoy exclaim, "Azazzy!" Like pizazz, but azazz, but -y. This only in morning. Like, morning in general bring feeling of azazziness not present in rest of day.

Also, I ask Finn, "What you dream last night?" And he reply, "Kitties." And I follow up, "What kitties do in dream?" And he say, "They flamshed."

Finn have other language construction I much enjoy. Is a double "is". Like, "What is that clock is?" First of all, question answered in question, right? Great, I think. But double "is" is extra joy. Example, I read Finn Peter Rabbit. Peter Rabbit eat too many radishes and french beans, get sick. Look for parsley. Mr. McGregor come after him, Peter Rabbit hide in shed, jump in water can, sneeze, all nearly lost as Mr. McGregor come after Peter, and then suddenly an interruption, "What is parsley is?!" Delivered in loud tone with face shoved suddenly in my arm.

"What is parsley is?" is now running joke between Finn me. He realize way he asked question very funny. I show him how he do it, he acknowledge very funny. Now we yell "WHAT IS PARSLEY IS?" suddenly at each other as non-sequitur, and shove head at other person. This always funny.

This, plus marvel and bang head against wall Sarah Palin, plus great new yoga meditation class, plus trying (you will not believe) write things to send places, this been Gallivanting Monkey life during self-hostage-taking month.

I not bother swear try write you more here, for swear only make self-captor-self angry. I whisper maybe I write you if captor nap. It not good writing, though, that I swear advance.

Note: This post been edited more thorough cavemaniness.
Posted by Tina Rowley at 1:16 AM 8 comments:

Email ThisBlogThis!Share to TwitterShare to FacebookShare to Pinterest
Labels: hostage crisis, I take me, me in one
Newer Posts Older Posts Home
Subscribe to: Posts (Atom)