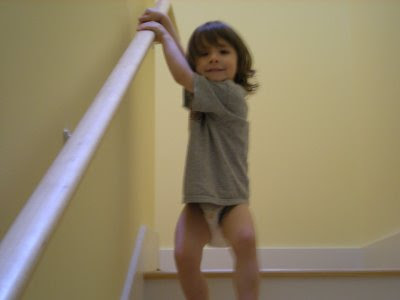 In case you were beginning to doubt. This = hot off the press.
Posted by Tina Rowley at 12:49 PM 7 comments:

Email ThisBlogThis!Share to TwitterShare to FacebookShare to Pinterest
Labels: Finn, is, real

please report to the banana phone. the buddhas are holding on line one. 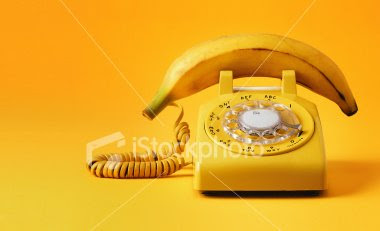 This blog has lain dormant while I tried to figure out how to convey the weird burgeoning glory of my son. He daunts me. My typing fingers hide behind my back. Uh-uh. We're not trying it. We'll miss it. We'll kill it. We'll immortalize something not quite true.

The same can be said of my brother, times even more. I haven't talked about him here very much, my older brother, David. He's basically a human unicorn. Unique and unearthly and odd and completely darling. An interaction scarcely happens between us wherein I don't fervently wish we were being followed by a stenographer. It's too much material. Someday I think I'll have to undergo hypnosis to go retrieve it all.

So it's with serious fear that I try to convey the both of them to you here at the same time. Fingers, you have to do it. WE DON'T WAAAAANT TOOOO. YOOOOOU just remember it. STOP MAKING US DO THE HARD THING.

Okay, so. David is a walking encyclopedia of spiritual and religious traditions. He's a practicing LiberalCatholic/Wiccan/Buddhist/Druid/Pagan/Theosophist/Co-Mason. I will have surely left something off of that list, and I truly mean that. He's not a Hindu, but he's well-versed in the philosophy. He's likethis with a rolling host of deities from Egypt to Ireland .

And he looks the part, too. He looks like a wise, weird, magical being. He's four foot ten, very round, with piercing pale blue eyes and a long beard. David is ever-bedecked in a thick, heavy garland of rosaries and malas of every conceivable kind of stone: garnet and onyx and amethyst and quartz and malachite and lapis lazuli and and and. All available pockets bulge and sink floorward with crystals and tiny statues and figurines and laminated pictures of beloved icons.

The man is heavily equipped in every sense: physically, intellectually, and with regards to pure spiritual power. I deeply believe this to be the case.

David is also extremely brilliant. Graduated from Harvard with a degree in math. Was recruited by Westpoint, who were barking hilariously up the wrong tree with our man. His mind is laserlike and complex - he's running some mental software that I don't think human hardware is evolved enough to run properly. Maybe some energetic software as well. Hence, the migraines and the eternal mysterious chronic pain and the fifteen-year on-again/off-again relationship with schizophrenia. I'm not, you know, a doctor and I know that Science has something to say about all of this as well but I don't see a conflict of interest here.

All of this is a long, long lead-up to the following brief transcript of a conversation between Finn and David - or, really, Finn and various Buddhas, conducted via banana phone.

It's this thing they do. Finn has gotten really into talking on the phone, and he loves to have imaginary conversations when we don't have actual people on the line.

Now, growing up in the same house with and then next door to his uncle, Finn has become familiar with a whole lot of different deities from various religions, but particularly Hindu and Buddhist gods and goddesses. David has a bazillion statues and Finn loves to hold them and tote them around and pat them on the head. When we leave David's room, Finn yells, "BYE, BUDDHAS! SEE YOU LATER AND I LOVE YOU!"

So what better way to combine his two loves - wait. His three loves. Finn loves fruit. He loves fruit so much he already married it. He'd be a total fruitarian if we let him drive the ship. So, what better way to combine his three loves - fruit, spiritual icons and talking on the phone - then to walk around talking on a banana to Gautama Buddha and Vajrasattva Buddha and Medicine Buddha and Ganesha and Saraswati, etc etc.?

David visited us and supplied the voices of the deities on the other end.

I can't relay too much, here. It's just not possible. Let's just say that when David interacts with Finn, he doesn't talk down to him and he doesn't spare detail. If Finn asks a question, David is going to give him the answer he would have given him if Finn had asked the question when he were thirty years old.

Finn, picking up the banana with great joy and anticipation: Hi hi! Hello!

Finn: I fell down on myself!

David: You fell down on yourself? Well, I'm the Vajrasattva Buddha and I'm here to grant you every conceivable good thing. I am the Primordial Buddha of Diamond or Rainbow Light, and the musicality of my being is the sound of ice being shattered by lightning.

They must have had like fifteen interactions on the banana phone like this, with David attempting to pack a lot of information into his end of things. The last one went like this....

David: Hello! We are the collective Buddhas.

David: Ah, windows. Windows can offer you perspective on many different--

It's like that around here, a million different ways. That's why sometimes I can't post. I just don't feel qualified.
Posted by Tina Rowley at 5:12 PM 9 comments: