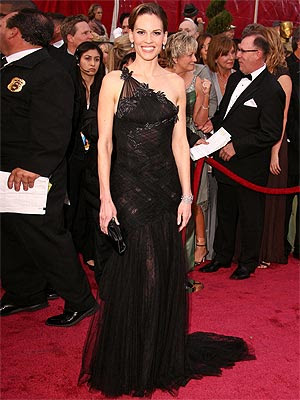 Because I tired. So tired. Hilary Swank, may I say you're lucky I'm not in the mood. And that's all I'll say about that. Except ARE YOU SEVENTY? Are you a seventy-year-old who feels she's looking spicy? I can't put my finger on it. It's just wrong.
Take comfort, Hilary Swank. I, too, have been given an unsolicited bad sartorial review. When I was working at a daycare back in my early 20's, I wore a big, baggy, purple ankle-length dress with a square neck to work one day. One of the Pre-K girls, Hannah, marched up to me and said, "You look ugly. That's a fat dress and I can see your neck." This from a girl wearing a Mickey Mouse sweatshirt, a miniskirt and pants. Know, Hilary Swank, that I know that I'm the girl in the skirt and pants as I'm armchair-quarterbacking your look. I wouldn't benefit from a surprise visit from the paparazzi tonight or any night...
...but your hair! It's like uptight Grandma hair! You're like an uptight Grandma halfway on the loose on a singles cruise.
I'm wearing my very cutest sweatpants as I type this.
All right. I have a bunch of Oscar frock pictures saved on the computer but I just can't do it tonight. They're there, though, ready. Tomorrow I do it.
In the meantime, behold this charming bit of Oscar-ness!

This is from my dear old friend Kris's blog, Complain-O Peeps. Linus is Kris's three-year-old son and he is an extreme awesomehead:

The Oscars are a mystery

This is what watching the Oscars with Linus is like:

Email ThisBlogThis!Share to TwitterShare to FacebookShare to Pinterest
Labels: my sweatpants are really flattering, who's that guy, your hair