Here are some P.I. photos from the caucus at my location, Olympic Hills Elementary School. (I went to this school for one horrible year - 4th grade - after we moved out from New York. I wonder if the soul of Mrs. Ekins haunts the place, grabbing people's hair and yelling Great Scot and little fishes! I'll tell you more about my year at Olympic Hills another time. My first kiss was in the playground at Olympic Hills, too, five years later. Good old bad old good old Olympic Hills.) My brother and I headed down the hill to do our civic duty. God DAMN but it was a good experience! 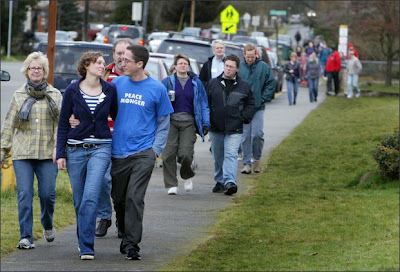 My brother and I got there a little earlier than these bustling arrivers. (Had to re-register to vote in my new location.) That couple looks like they're having very dreamy feelings about democracy. 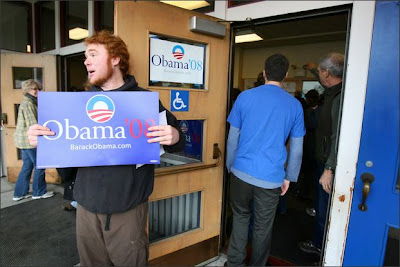 This dude was at the door when we arrived. When we were about twenty feet away he looked at me like, are you gonna do it? I gave him the thumbs up and he said, "All right! We need you!" which made me wonder if there were a lot of Hillary supporters in there already. And later it made me wonder if I'm looking old. You know. Older ladies for Clinton and whatnot. Oh, that stereotype bore out inside, let there be no doubt. Not all older ladies were for Hillary, but supporters for Hillary were older ladies. Uptight-lookin' ladies. Believe it. With a few stern square dudes thrown in there. I'm just reporting. Not all of the Obama supporters were all that and a bag of chips but the Hillary camp is not where the after hours party is taking place, let's be clear. Not that any of this matters. But. True. And while there were some Clinton supporters in there, I didn't need to worry. Obama was where it was at today. 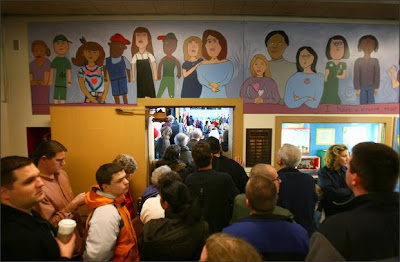 The crowd was huge, spilling over on to the street. I didn't expect anything like this. It was such a beautiful thing. I was thrilled to be a part of it. My neighbors out in force for democracy! I felt such affection for everyone, including the Hillary supporters - for whom I admit I didn't sound like I was overflowing with affection up in the preceding paragraph. Them, too, I mean it. Even if I don't want to sneak behind the building and smoke a doobie with them. I still salute their commitment to democracy! 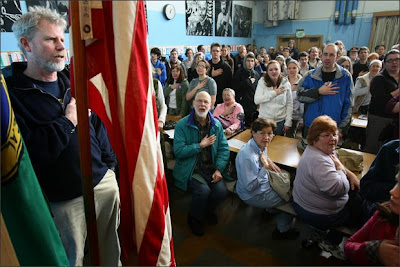 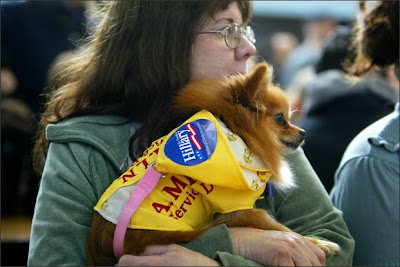 This dog-lovin' lady was right next to me also, hogging my fame with her gimmick. I watched the photographer take this picture. I had props, too! I had my purse. And a bottle of water. My brother was with me; I could have ostentatiously cuddled him. But NO. Little Miss Candy was all oh, bark bark, I'm so adorable, I'm for Clinton. I could have barked. But I didn't because I was focused on democracy unlike some little furry fame-seeking missiles and their owners. All right, all right. Her owner looks focused on democracy, too. Shut up.

So...my precinct is totally bitchen, you guys. I love that these people live on the blocks right around me. There are about 85 Democrats/Independents/Undecideds in my precinct, at least who showed up to caucus. The discussion was lively and smart and inspiring. And it was stunning to see everyone so passionate and engaged, young and old. It's like...it's like Google maps but you get to go close up on these couple of blocks all the way into people's minds and hearts. Hello, people! I didn't quite realize that all of these houses are filled with PEOPLE! You and you and you and you and YOU. Oh! And for the most part you are smart and cool! I had no idea. 17th Avenue, 19th Avenue, 127th Street. I salute you.

Plus I spoke up! Man, speaking up at a caucus sure makes you feel like a citizen. I am a total citizen. In other citizen news, I got over myself and made some phone calls for Obama through his web site. Called some ladies in Louisiana. I've decided that this makes me a superdelegate.

Oh, and Obama totally creamed Clinton in my precinct. 64 to 20. 5 delegates for Obama, 2 for Clinton. I didn't stand up to be a delegate because I did that in 1992 for Paul Tsongas and I fucked it up! I didn't quite put it together that there was another meeting I needed to go to after the caucus. I was like, oh, they selected me to be a delegate. How nice. Thanks guys. It's an honor. I will tell my diary. Otherwise Obama would be running against Paul Tsongas' widow.

P.S. Next time I will tell you about our trip to the Obama rally on Friday. Very exciting!

I went to my caucus too! And it rocked. Washington Middle School, 23rd and Jackson. Right next to the Franz Bread bakery, so I will forever associate caucusing with the smell of fresh-baked bread. YEAH. Obama took our precinct, four delegates to Clinton's one. I loved seeing so many kids! They were just along for the ride while their parents caucused. Playing with balloons, wearing buttons, having tantrums, knitting (yup, a very serious 8-year-old girl). I loved it!

I, on the other hand, being a Democracy-hater, chose to spend the day watching 30 Cub Scouts race little wooden cars all day. Oh, and to tell some nice Senior Citizens that no, this wasn't the Republican Caucus, but they were welcome to vote on which car was coolest looking. They didn't take the bait and instead went off to check other buildings for Huckabee supporters.

Thanks for capturing the spirit of this glorious day. Mine was a similar blast...I'm still on fire with it.