so i can enjoy my final pastries in peace 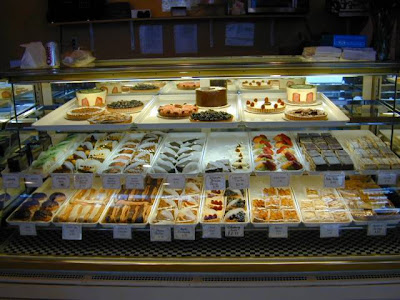 I've written at some length in my other, nearly-abandoned blog about this solo show I've been trying and then not trying to write. I'd write about this over there but I want all my 365 posts to be on the same blog for some compulsive reason. A step-on-a-crack-break-your-mother's-back kind of feeling. I can't split them up, the posts. They're going to be threehundredsixtyfivetuplets.

I just found a green paper folder with a bunch of writing from this nearly-abandoned show in it, and a lot of it is SHUT UP ALREADY. DAMN. which won't be surprising given my writing style. But some of it I like and find attractive to explore in more depth. I think I want to keep making my show!

I'm happy to say that. This show...if it is a show and not just a piece of writing to be read, which would be okay, too...but I think it's a show....is like my deathbed thing. It's the thing on my deathbed where I imagine I might be like, HEY LOSER, WHY DIDN'T YOU? THAT WAS THE ONE THING....if I don't do it. Actually, when I think about it, I much prefer that my dying moments be focused on blasting love towards whomever I'm leaving behind and opening up my heart to wherever I'm going. That'll be lame if I'm all like, my solo show!

So let me reframe that. When I'm terribly ancient and getting ready to check out I think it's possible that I might, say, in the last few weeks of life, have some pangs about whatever I didn't risk artistically that I might have done. I would like to spare myself these pangs. I'd rather lie there all wizened thinking, man, that was one spastic solo show I did there. But good on me for giving it a go. And then I can get on with the business of eating the final croissants of my life and hanging around with my remaining people.

I think it's a show and not just a piece of writing to be read because that's riskier for me and I want ultimately to have been as ballsy as I can accomodate in this Tina suit. Writing is one kind of pleasure and acting is another. Acting is like the only sport I play, my favorite source of adrenaline. I think it will have to be a part of it, this piece. I think it can't just be for reading. I want this piece to be the Silly Putty, and me to be the thing on the newsprint that gets picked up and stretched out.

This post is so Bloomerang-y. Non-readers of that blog must be like, what gives with the switch in tone? Blog 365 gives. And so does writing in the middle of the night.
Posted by Tina Rowley at 1:00 AM

Hey, miss! You're an illustrator too!

I think it is KEY to do the brave things. I think I am so afraid that they key artistic things actually just slip out of my mind and years later I'm like, oh, oh yeah, I was going to do that!

I make you my solemn clog comment promise vow that I will do something (else- I've done a few) brave this month.

"I think you're awesome."

That's what I hope your big self says to your little self in your final days/years/whathaveyou may as well be RIGHT NOW.

Say it. Somewhere in there you know it's true.