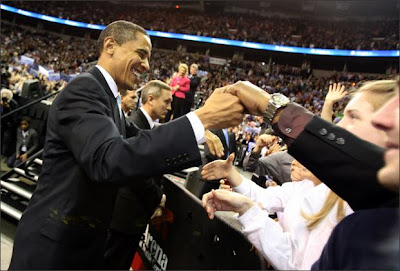 Dave and I went to Key Arena for the Obama rally last Friday. It was the windup...the pitch...the baseball metaphor to the crazy exhilaration home run of the caucuses the next day. We're so glad we went, and we're so glad we didn't take Finn because the outing was long and it was cold and, weirdly enough, the rally was not geared for toddlers. W-e-i-r-d. He would have been out of his mind and we would have had to leave long before Barack Obama reached the stage. Probably during the "Fired Up, Ready To Go" video. Yeah. That would have been when.

But yes! We went, and we even experienced a little drama. Drama! Conflict! Man vs. Nature! Man vs. Man! Man vs. Too Many Men! Man vs. Door! Man vs. Personnel!

Man vs. Nature = I said it was cold out, already, right? It was. It was cold. Super cold. And windy. Wind chill. Cold, brrr, windy. (Everybody who's moving to St. Paul: Stop laughing.)

Man vs. Man = So we parked our car, and then we walked to the Seattle Center to find the line, and found that we might as well have just stood outside of our car and waited for the line to come to us. We had to weave around and chase the end of the line because, as Dave noted, it was getting longer so very fast that it was like dominoes falling. That quickly. Vwoooooooooozh. This section should actually be called Man vs. Line. But that wasn't going to sound good up there after Nature.

But here's a new category!

Man vs. Too Many Men = The line started moving and we got very close to the Key Arena and then an announcement came over a loudspeaker that the event was at capacity. No more us go in.

Tears truly came to my eyes. You may have noticed that I'm an Obama supporter. But also Dave and I got out of the house without Finn and it took a lot of doing to do it and this was going to be kind of a great date for us. We'd be getting to enjoy the event in carefree style, out of toddler managment mode. A big deal. And Dave's very much in favor of Obama himself. So we were bummed out in the extreme.

Man vs. Door = We just couldn't leave yet. We hovered around one the doors to Key Arena with a largish group of people who also couldn't quite give up the dream. We had our noses to the glass. A disappointed lady from the King County Council was lurking around in our vicinity. She had Obama's astrological chart in her pocket. We had nothing in our pocket for Barack Obama but love*. Everyone near the door was trying to figure out some kind of angle to get in. Nobody had anything.
*Perhaps a banana. Perhaps we were happy to see him.
Man vs. Personnel: A put-upon looking older security fella from Key Arena cracked open the door and squashed our hopes. Go away, people. No dice. You can listen to the speech on a loudspeaker outside**. Hope squasher! You are anathema to the whole Obama campaign, don't you realize it?! You have worked at Key Arena so long that the hope has been boiled out of you. That's it, isn't it? That's it. You're a Key Arena insider, all inside it, while we're not.
**See Man vs. Nature.
You may notice that I'm all out of Man Versuses. This is because the tides were soon to turn! Dave and I wandered away from the Door of Futility and remembered that Obama often comes out and greets the people who couldn't make it in to his events. We tried to figure out where we thought that might be. There were some people bunched up on a line across from where we were, down and then up some stairs. We headed down the stairs EVEN THOUGH WE COULD SEE THAT THERE WAS A METAL BARRICADE BETWEEN US AND THE PEOPLE OVER THERE. It was as though somebody had suddenly set us on 'random'. Hey, there are some people over there! Let's, uh, go into this bush and then try to, uh, jump up on the roof from across the street. And then we'll...we'll...tie our shoes!
But do you know who set us on random? It was angels. Angels set us on random. Or our dead fathers. Dave's dad and my dad. We decided we wanted to give them credit for this. And I'm getting chills as I type this! All right. That's it. The dead fathers are totally getting all the credit for this. Everybody who's like, Tina, dead people are dead and they don't get you into Obama rallies can sit and spin for a minute.
Down at the bottom of the stairs there were a couple of young dudes trying to jimmy a door open. It wasn't working. Dave and I turned to each other to try and figure out our next move when we looked over at the guys again and, instead of them, we saw a girl inside the arena holding the door open for us and giving us the hurry-wave in. Come on, come on!
Woohoo!! We were in! Dave yelled, "Yes, we can!" and we ran inside laughing.
We were just mouths agape at the good fortune. And it was so much cooler than if we'd just strolled in in the first place because we were so exhilarated. Man, I felt like Marcia Brady sneaking into Davy Jones's hotel room in a room service outfit. We ran to the closest, least crowded-looking aisle and headed in. We found a great spot just to the side of the top of the stairs, where we could totally see the stage below us. The stage was facing away from us, but we knew we'd be fine because he always turns around and talks to everyone at these rallies.
Man vs. Nothing! Man vs. Motherflipping Nothing!
We had to be the happiest people at Key Arena. And then, for the sweet little cherry on top, a girl waved up to us and pointed out a couple of empty seats in front of her. Her sister and a couple of friends didn't make it in, so there was no point in saving their seats anymore.
Beneficiaries vs. Further Awesomeness!
Here is where we were. 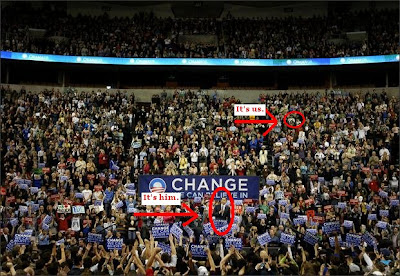 This, I have determined, is us there in that red circle that doesn't have Obama in it. It just has to be, and is. Tall person next to short person in white shirts standing in the right aisle at the right level in the right area.
We settled into our seats and waited. It was Good Mood Central at Key Arena! Everybody looked so happy, everyone smiling at everyone else. People kept doing the Wave. I love humanity's commitment to the Wave, even when it's minimal. You have to do the Wave, we all seem to agree. You don't have to do it well. You just have to get your arms up there. You can bring it if you feel like it. You can phone it in. Whatever. But very few people reject an incoming Wave out of hand. It'd be like not calling 911 at the scene of an accident, or not doing CPR when you know how when someone needs it*.
*It's not like that at all.
We checked out the crowd. Down on the floor in front of the stage...I saw...a hat on a head. A fuzzy, colorful, familiar hat...on a familiar head...our friend Morgan was down there! With our friend Deb! We stood up and started waving, and she saw us and was as surprised as we were and we laughed and mouthed things to each other and waved and blew kisses and made surprised and happy faces and "call me" phone ear hand things.
Tina, for God's sake, how was Obama! Come on! Shut up! This whole mise-en-scene business is so vastly more interesting to you than it is to us! What else did you do? Take off your coats? Have a sip of water? Shut up! Go on! Tell the part we care about.
Once Obama came out, which was four million years and three trips to the bathroom after we came in, I have to say that I was already sort of sugar-crashing from the exhilaration. He was good. I was tired. I was happy to be there. It was loud. I couldn't hear everything he said over the cheering. There were a lot of flash bulbs going off all over the arena. It was a stump speech that I'd heard most of already, sort of word for word. But it was cool to see the man in person. And there was a girl sitting next to us who was 17 and who'd skipped school with her parents' permission to be there, and she was saying she was going to call in sick to work the next day so she could caucus, since she'd be 18 by November. She didn't seem like some kind of politically active student-body-president type. She just seemed like a regular cool kid who cared. There were young people like that everywhere, and it made me really happy.
The whole day, just being with 21,000 (18,000 inside, 3,000 outside) other people all united for the same thing, felt magical and historical and cool. 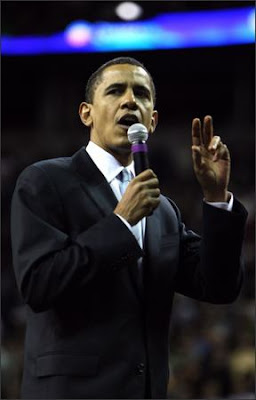 Email ThisBlogThis!Share to TwitterShare to FacebookShare to Pinterest
Labels: man vs. everything then nothing, obama, rally

Tin, I tell ya, I'm starting to get a feeling. It's a gooood feeling. I'm not going to say just what that feeling is yet, cuz I don't want to jinx it, but it's a good one.

You know who my favorite writer is? You. This was a great post. And you're right, that was a great event. I cried it was so great. Thanks for describing it for the world.

Pete: You got it!

Kris: It's a goddamn nail-biter. I hear you about the not wanting to jinx it. And the heat is getting turned up for him. But...yeah. Fingers are crossed.

Paige: That is so kind of you, thank you. Made my day.