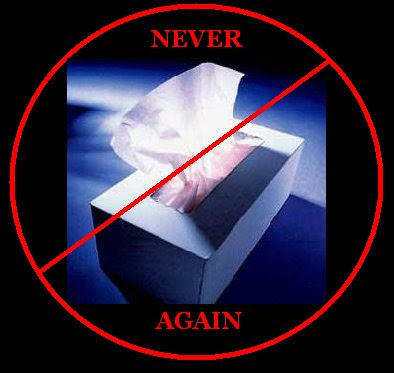 So, I'm still breastfeeding Finn. And I used to use these great Danish wool breast pads but I don't know where they went so I've been using tissues or paper towels because that's the kind of guy I'm. (That's half of a Will Rogers rhyme which I love. I'm biding my time 'cause that's the kind of guy I'm.) And so recently I was using some folded-up Kleenex for a breast pad - and this was in the dark, putting Finn down for his night's sleep --

Look, this might be a little bit...well, gross is too strong a word, but unsavory in some way. Mildly icky. You're free to go if you want. I won't know. You can go see if they're having a sale at Macy's online or something. It's okay.

If you are still here, don't get mad at me if you feel ultimately that you would rather have been shopping at Nordstrom or whatever. Only you know your ick quotient, and where it falls.

So it was dark, and there was the folded-up Kleenex preventing leakage on one side while Finn nursed on the other. And then it was time to switch sides and I took the tissue away and Finn went to nurse but then he wouldn't do it. He kept popping off and saying "No." And eventually I figured out that there was a little wet bit of tissue that had stuck to my boob from the leakage LOOK I TOLD YOU THIS WAS A LITTLE ICKY DON'T COMPLAIN NOW and Finn understandably didn't want to have it go in his mouth. I removed it and made a big deal of showing him that the little bit of tissue wasn't there anymore and he was free to go about his business and everything was okay. I assured him that I understood that it must have been weird, and he agreed. "That was weird," he said.

I wonder how long this will last. And a quick question: does anyone else call them "Kleenexes" instead of "tissues" normally? I have to make myself use the word "tissue". I have been deeply branded by the Kleenex people. Congratulations to you, Johnson and Johnson.
Posted by Tina Rowley at 11:31 PM

Email ThisBlogThis!Share to TwitterShare to FacebookShare to Pinterest
Labels: never again, remember the alamo, that was weird

Do you have an old sheet? One that is 100% cotton and worn to extreme softness? My Mom made me awesome pads by just cutting an old sheet into 6-8-inch squares with pinking shears. I could fold them to the right size. They were so soft and they never stuck and I just tossed them in the wash.
I always say 'kleenex', too.

It is an infringement on the trademark held by Kimberly-Clark Worldwide, Inc. to use the term "kleenex" to reference any brand of facial tissue other than authentic Kleenex™ brand facial tissues.

I used to say Kleenex, but then my mom taught the kids to say tissue, and it's caught on. It still doesn't seem natural though.

I love hearing about Finn's thoughts. What a charming little man he is. :)
He is so verbal, and it's hilarious to hear his commentary on "baby" things. It's like hearing a newborn say, "Oh, heavens, please pardon my screaming, I have a touch of colic."

I just can't believe he's almost two and you've still got that much milk!

To me, the ickiest part of that whole story is "Kleenex." I've always been a "tissue" girl myself.

Oh, man. I congatulated Johnson and Johnson. Kimberly-Clark must be fuming! They should just be happy that I say Kleenex.

lord alive this child is too much. "now you say it", indeed. i'm so glad you're writing this down...

You can also get wool breast pads at http://www.breastmates.co.nz