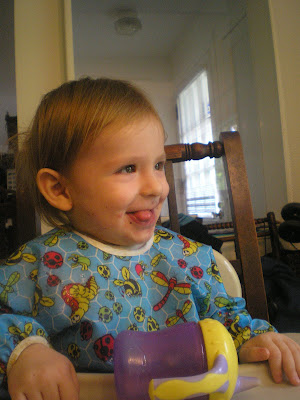 You think Finn is just sticking out his tongue. Oh....oh, no. No. This, what you are seeing, is a rare and precious sighting of The Awesome Thing Finn Does Which Never Happens When a Camera Is Around.

He's not sticking his tongue out. He's winking.

This is how he winks!!


You wink at him and you're like, now you wink at me. And most of the time he just looks at you blankly for a second and then wanders off to read the Talbots catalog. But sometimes! Some lucky rare times, he will bust out this weird wink of his! This weird tongue-sticking-out but eyes-doing-nothing!! wink. And that is rare and ultra-bitchen, but this was the one time we've ever been able to catch The Wink on camera.

It's like Halley's coment. It's like Nessie. (Nessie is real, ok? For my purposes here? Real and just really rare.)

*I understand that my enthusiasm level for this move of his is higher than yours can ever be. I don't need for you to freak out like I'm doing. But you can if you want because it's AWESOME, MOFOS!!! OMG.

Oh, I'm freakin' out way more than you.

Sure, it's partly because of the wink.

But the bib? It's AWESOME, YOU MOFO!

That is a freaking awesome sighting! I should have known that Finn would be one to wink outside the box. Cutie cute CUTE.

ps- I am already dreading the end of nabloblablaghettyblah. I'm already spoiled by your glorious daily posts.