We had a fantastic time at the Halloween Awesomehead Convention of Adorableheads, yes we did. Man, this was the baby's first really dialed-in holiday, and it was a joy. 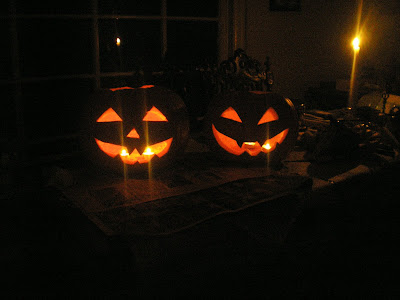 I was briefly afraid that Dave and I wouldn't get it together to carve jack-o-lanterns but after Finn went to bed on the night before Halloween, we pulled it out! This was Dave's first pumpkin carving, as a transplanted Australian. And it was kind of mine, too! You see, I was the baby of the family. Everybody else always handled the carving. I just wandered by and idly patted them on the back, "That looks great, you guys. Carry on. I'm going to go draw on a wall or something." And I didn't have the impetus to spearhead my own pumpkin carving until Finn came along. But there they are up there! I feel that we did well for first-timers. We didn't make, like, pumpkin lace or anything, intricate cobweb headgear, any of that tricky advanced stuff. But these jack-o-lanterns represented, I think. 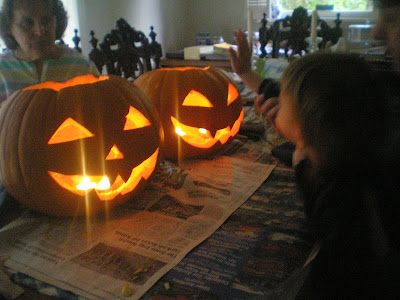 Finn was psyched when he came downstairs and saw them. "CUTE!!!" he yelled. "FUNNY! GREAT PUMPKINS!!" He wanted to pat them and hold them and hug them. "Hug pumpkins!" 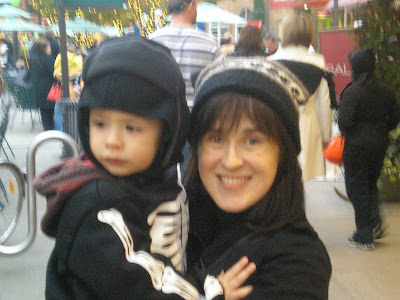 The skeleton suit isn't bad, but it's not like we made it or anything. And the surfer hood sticking out sort of dilutes the look, but, dude. Babies gotta be warm. Dave liked the simplicity of the skeleton suit, and I agreed with him. But I'd lobbied mildly for a pirate suit for him. I'm glad we went this route. Honey. If you're reading this. Which you will be, because I make you. I liked the skeleton suit. 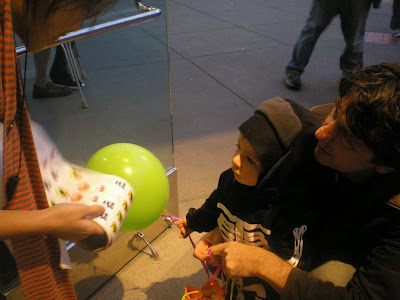 Here we are at the University Village. None of our photos captures, or can capture, the mayhem of University Village at trick or treat time on Halloween. Mardi Gras. New Orleans. But for babies. I'm telling you. The joint was crammed with butterflies and Spidermen and Harry Potters and dinosaurs and bears and charming awesomeness. The Gap, in an apparent effort to protect the teeth of the future, was giving out stickers. 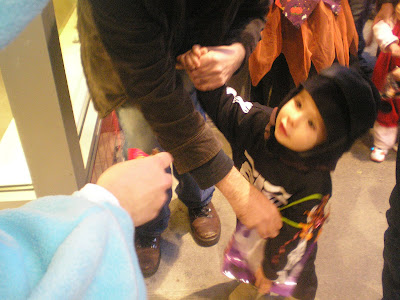 The whole trick-or-treat concept was a little wobbly for Finn. He could say "trick or treat" but he never launched it during the actual moment. This blue arm above is attached to a woman dressed up as a giant Ugly Doll. Finn became obsessed with the big Ugly Doll. 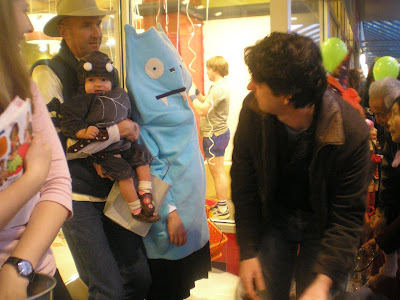 "Big Ugly Doll!! CUTE!!!" He kept saying it after we'd left the scene so we came back and got a photo with her. 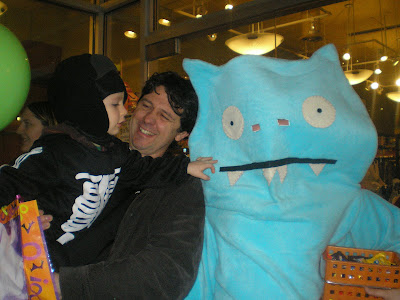 Oh, he's just that into you. He's into you, all right, Ugly Doll. 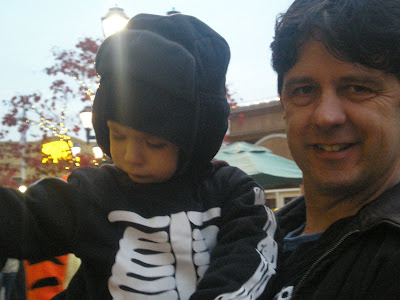 All in all, Finn got about five pieces of candy, all of which Dave and I ate in the car on the way home. He's too young for candy. But he's not too young to score a small Kit-Kat for the woman what gave birth to him. 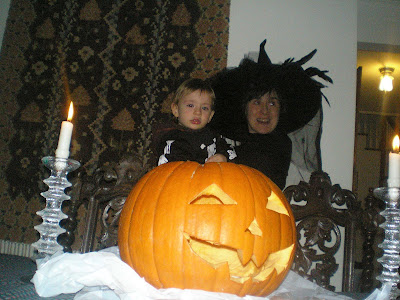 At home, to receive trick-or-treaters, I busted out the witch hat and a black outfit. You can't tell from this photo, but Finn was fairly impressed. But I can't compete with the pumpkins. The pumpkins are his first love. 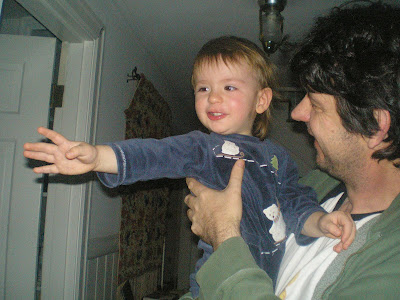 All in all, Finn's mind was properly blown by this Halloween. As he was going to bed he cuddled with me and Dave and told us what he'd seen. "Boys and girls! Walking the ROAD! Cos'umes! Pumpkin. Many, many!" He could barely fall asleep. And then he woke up at four in the morning, still wired. We went ahead and took him downstairs for a brief visit with the pumpkins. We told him that the pumpkins were smiling at him. And he yelled and waved at them,

Check my pumpkins from the first half of october. I think you'll like them ;)
Have fun

Wow, you've been posting like crazy lately. You need to learn to pace yourself.

Ash: I know! That Ugly Doll is bitchen.

Never really got into the pumpkin thing - being also from Australia, but I think Finn would tell me I am definitely missing out.