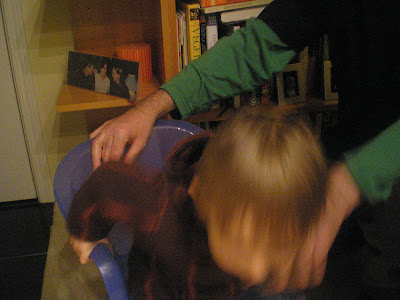 It's good to have a word that you can pour all of your bitterness into. And Finn, my friends, has found his. His bitter word is "later".

See, because "later" is so much friendlier to say than an outright "no", right? I mean, if he's asking to do or have something that he could conceivably do or have later, if he's not asking for PCP or to go gather up raccoons to sleep in our bed with us, then we're going to say "Oh, you bet. We'll do that later." We like to save "no" for stuff that must not happen.

So he'll ask for milk (direct from the source) and if it's not a good time I'm going to tell him "later" and then he'll cry out, "Milk LATER!!!" But that "later" is dense with feeling. That later holds all the emotion of "You killed my family" or "You have a robbed a man of his last best hopes".

And it's sort of poignantly funny that he'll be tearfully calling out "Pumpkins LATER!!" or "Play LATER!!!" because it makes it sound like he really, really would prefer to do it later and we're trying to make him do it now.

Have you ever read the book "A Prayer for Owen Meany"? (If not, go read it right now and then come finish this paragraph.) You know how they capitalize all of Owen's dialogue, to convey that there's something unconveyable going on with his speech? It's like that metaphorical finger pointing to the moon, where all you can see is the finger and not the moon unless you have the direct experience of the thing in question, yes? Well, Finn's "later" is the moon and nothing I do here in print, no italics or boldfacedness or capital letters can point to what he has going on in that word. But I tried. I had to try.
Posted by Tina Rowley at 12:56 AM

Email ThisBlogThis!Share to TwitterShare to FacebookShare to Pinterest
Labels: bitterness, Finn, not now