we ignored bumbershoot, and now we're PAYING for it 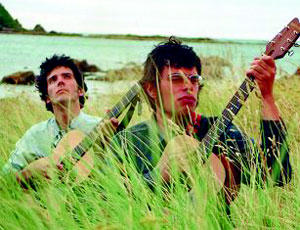 Flight of the Conchords

and they were here in Seattle last weekend during Bumbershoot, our big arts festival.

Man, when I was in Australia with Dave, there was a stand-up show on television that we relied on, and Flight of the Conchords was on all the time. They were never one drop less than brilliant. And I don't like musical parody as a form AT. ALL. Their homage to Bowie...NO, sir. It can't have been that hilarious. And yet it was.

And they were here. When is that going to happen again? Maybe NEVER.

Thank you, Flight of the Conchords, for sneaking in and out of town and giving us a new, different kind of pain to feel these days. It aches. Arrgh.
Posted by Tina Rowley at 2:45 PM

hi there - wanted to let you know that the conchords will be at the vancouver comedy festival sept 20-25, next week...not sure of their exact shows, but i know those are their last shows in the US for quite a while...check out the website for info: www.vancouvercomedyfest.com

Thank you! Oh, man. I wish we could go. My husband's still in the middle of immigration stuff, so he can't leave the country yet. They're so near, yet so far! But I really appreciate your telling me.