the superbowl of australia!

G'day, Mates!! It's a ripper of a day at the home of Mr. Hatrabbit!

Dave's Fay-vo-rite Rugby League team, the team he's followed since he was a boy of 6, have made it to the Grand Final! 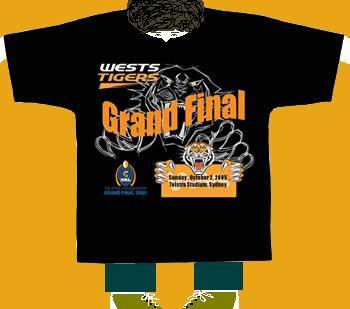 When Dave was 6 years old, he played on a tiny little rugby league football team. His team had powder blue jerseys. Fair enough, okay, whatever. But one day, they played against a team that had BLACK and ORANGE jerseys. They were Tigers. Dave looked across the field and knew that this was his destiny. He was not meant to be some kind of wispy powder blue pawn. Dave was meant to be a kick-ass, snarly, awesome TIGER.

Dave became a manic little fan of the Balmain Tigers. His parents took him to a sporting goods store to get him a Tigers jersey, but they only had a very large one. His dad floated out the idea that they order one in his size and come back for it, but the small Tiger was having none of it, so they bought him this enormous jersey that fit him like a dress. Dave wore that Tigers dress with pride.

Two years before, the then Balmain Tigers had won the Grand Final. 1969. That's the last time the Tigers took the Final. They went to the Grand Final in 1989 and 1990, but they lost both times.

The Tigers have almost always been the underdogs. Dave loves them because even when they're losing, they play their guts out until the clock runs out. But this year, they're on fire! They've got a new coach, Tim Sheens, who took his old Canberra team to the Grand Finals 4 or 5 times - one of them in 1990, where they beat the Tigers in extra time. And they've got a player called Benji Marshall, a young guy who looks like he's going to shape up into one of the best players the game's ever seen. Dave's been following the Tigers from over here, and the news has just kept getting better and better. 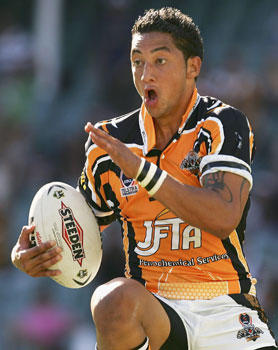 The Hatrabbit has been feeling some bursts of homesickness, and it's a goddamn shame that he can't be in Australia for this historic Tiger time. But we've got cable, and the game's going to be televised over here; and we've got Tivo, so we won't have to watch it in the middle of the night; and we're going to invite some friends over and make some meat pies and watch the game and make a DAY of it.

Sunday, October 2nd. Telstra Stadium. The Wests Tigers vs. The North Queensland Powder Blue Pawns. (Cowboys if you want to be all technical about it.) 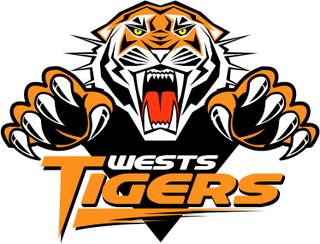 Ah Dave. How I know about this excitement! Underdog fans unite! I couldn't be more happy for you about the Grand Finals. Go TIGERS!

Ahh, aussie sports...I lived there for a few years - one of my housemates was an AFL player, actually - and developed a fondness for all Australian sports.

Dave might kick my butt a little bit, though - I'm a Sydney fan, through and through...

The "Superbowl of Australia" was held on Saturday.

What's this other sideshow of thugs about which you write?

You're a lucky man, Wombat. You escape a cyberslap by virtue of the fact that Dave's from Sydney, and was delighted when the Swans won last week.

The NRL a sideshow of thugs...only very partially true. That would just be the Bulldogs.

But you are lucky that this isn't Dave's blog. He might be less gentle.

Sandra - Are you a Roosters girl?

Well I'm thankful for you not going the biffo blog-wise, Tina.

Clearly you are one of the civilized league-istas.

Here comes something I didn't ever think I'd write:

I'm new to reading and writing blogs, and I haven't time to enjoy all of The Icebox today, so I went back to shorter posts, such as The Problem With the Wedding of Larry and His Brother Harry (or whatever it was called) and laughed my ass off. That is the kind of random stuff I think about all the time! I also not only loved but COULD PICTURE the kickball story, because I went to--ba-da-dum-- Ridge Street Day Camp! Did you? Anyway, for more stories of childhood, you can read what I have to say...or just bask in my admiration.

Hello, Tomato and Basil! You went to Ridge Street Day Camp?! Get out of here! Yes. I did too. But it wasn't a year-in, year-out kind of thing. I pretty much remember going for one week one time or something like that. Um...we went swimming somewhere. Er. Maybe we painted. Anyway, I shall be sure to check out your blog. A Large Slice of Cake - there be no other size, for me. Bring on the cake, bring on the blogs.