He doesn't say it all day long, "fountains and mountains". It's not like there was already a 75% chance that that would be the next thing out of his mouth. But he does say it sometimes, and I like it, and that's why I was going with this title. He just says it, apropos of nothing.

"Fountains and mountains!" he declares as we're driving in the car, pointing out of the car window to a fountain-less, mountain-less scene.

Look. Let me say right now. If you're one of those people who's like, "I don't CARE what your BABY SAID. It's not that cute. It's not that awesome. Don't tell me everything your baby says," just cover your eyes a minute.

Okay. I will assume that everyone left here is either on the floor dying to hear or mildly amenable to hearing a few more of the SOLID GOLD HITS that have recently issued from my issue.

I like this because it's like he's calling Santa over an intercom. Santa, please report to town.

Me: What was that, honey?

Finn (shyly): Pleased to meet you.

Oh! Agh! My heart! All right. I promise that the next post won't be exclusively about how great my child is. It will be something else. Person who had to cover their eyes, you can uncover them now. 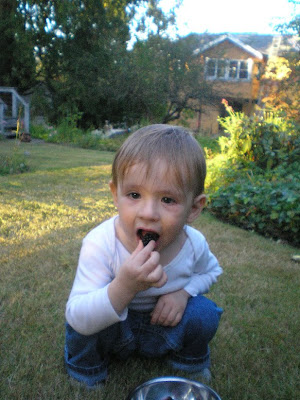 You can look at him for a second, right? By the way, that's our house there in the background, getting all built.
Posted by Tina Rowley at 3:03 PM

I circled my little mouse pointer around Finn's little head in this picture like I was giving him a little cyber hug. HE IS SO BEAUTIFUL!! And quite the eloquent little devil. And I, for one, do not grow tired of hearing what your baby says. More baby monologues!!

i love reading about finn and what he says the whole day long. i think it's wonderful.