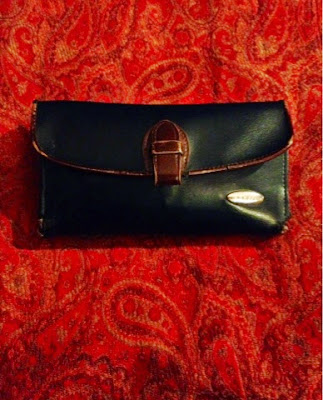 Up there you see a twenty-one year old wallet. Why? Why do you see that up there?

What's happening is that we're in Week Two of the can't-talks. I mean, I can talk, I'm going about my business, I'm okay, but what I mean is that I can't write, at least not in my normal way. Like I posted last week, my body is doing some deep processing of some difficult material, and there's too much pressure in my head and around my heart and just all up and down everywhere in this old vessel for me to be able to write a real thing. So, once again, we're doing something a little different, and eventually I'll tell you what sparked this.

What we're doing is going through my old wallet.

Know that I have spared you from many things. This is a highly curated selection. And also, there are no pictures of me because I gave them to Dave, who has them now in his wallet, and it would be cheating to go get them. Which is sad. I had a tiny little proof of a cute old headshot which I would have liked to show you. But rules are rules. 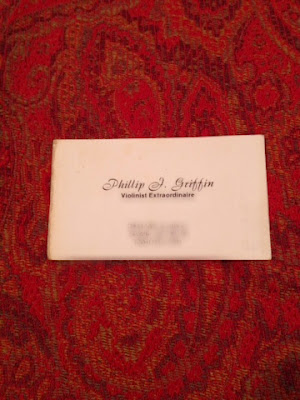 Phillip J. Griffin, Violinist Extraordinaire. I have absolutely no idea, which is why I like it so much I'm leading off with it. 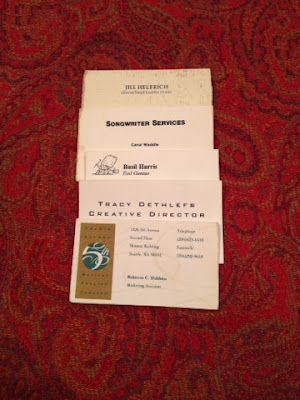 Ancient business cards of friends who are still friends, which pleases me. 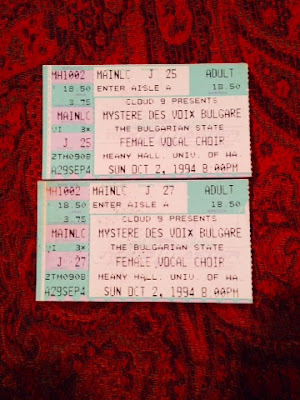 Twenty years ago tomorrow I went on a date with my then-fiancé to go see the Bulgarian Women's Choir in concert, which is somehing everyone should do. (See the choir, that is. You don't all have to go with Thomas. I mean, you can. You can work that out for yourselves.) 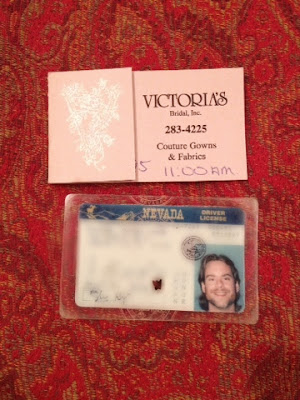 There's Thomas now, my first husband, in his old driver's license. I thought that would pair well with the appointment card for the fitting of that wedding dress. 11:00 am sharp on 5. 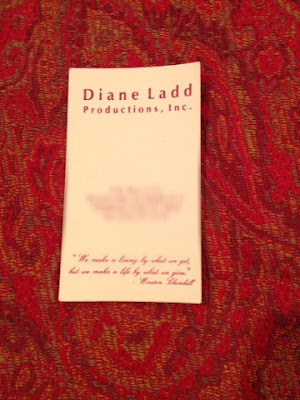 Diane Ladd's business card, as you can see. (IMDB, for those who might not know/remember the great Ms. Ladd.) Thomas and I took a weekend acting workshop from her. I did a scene from The Children's Hour and she said that there was nothing she could teach me emotionally that I didn't already know, which I've been savoring for 19 years now. Nailed it! 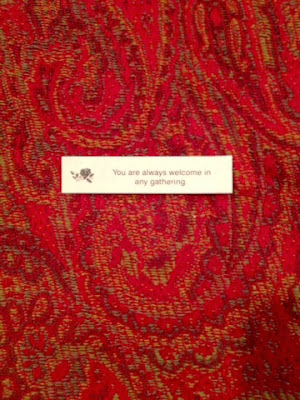 "You are always welcome in any gathering." Maybe I looked at this old fortune before parties. 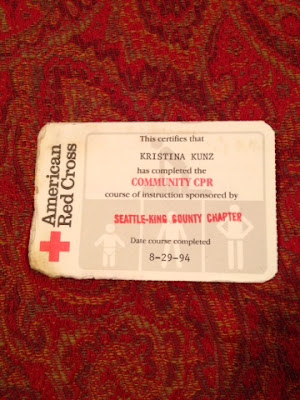 I might also have been welcome because I could do CPR. 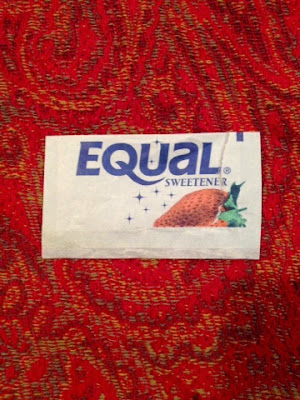 Or because everyone knew I was always good for a grain or two of Equal. Yes, I've kept an empty packet of Equal for twenty years. 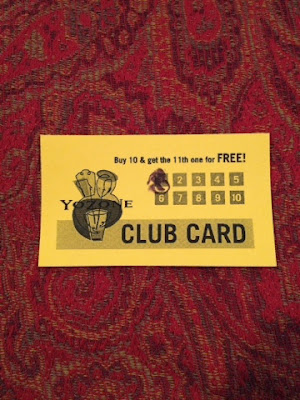 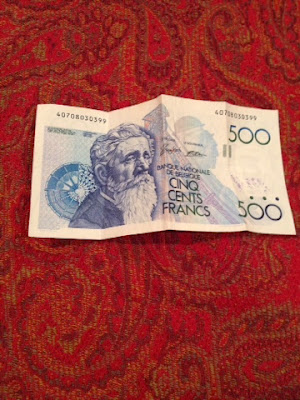 500 Belgian francs, which tells me we're getting closer to the impetus for this wallet raid. In the winter of 1992/1993, I traveled to London for a month with a friend, and then to Luxembourg for a couple of weeks to visit cousins. 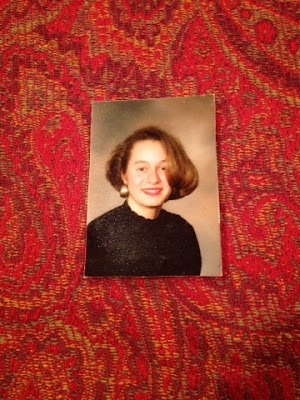 This is my cousin-by-marriage, Anu, who showed me around Luxembourg. 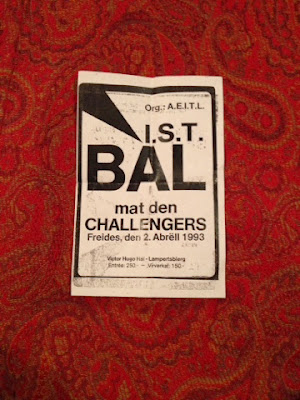 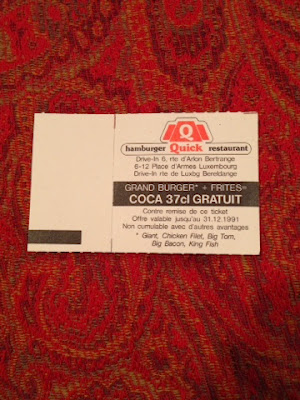 We most definitely ate at the Quick hamburger restaurant. 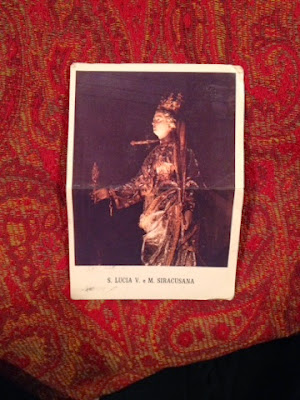 A few nights ago, I googled an old boyfriend. I don't remember why he came to mind but he did, my unlikeliest old boyfriend, whom I met on this particular trip. After Luxembourg, I went to Italy for three months, and there, towards the end, I met Terence, who was a half-British, half-Sicilian mercenary in the British army. (There's the bit that made him so unlikely for soft, unworldly young me.) We had a brief and sweet little romance which I resisted at first because we were so different, but when I gave over we fell in something very love-like.

The saint up there, as you might guess, is from him. She, like he, was from Syracuse. 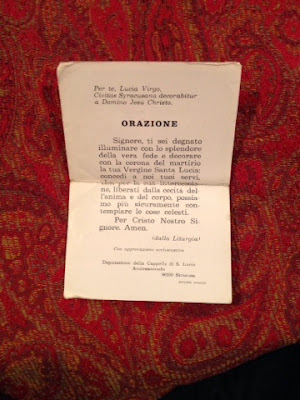 The back of the saint's flier.

I met Terence at a hostel in Florence. He won me over when I watched him interact with a group of Japanese tourists, drawing maps for them and joking with them, making them giggle. He charmed us all simultaneously. Then a day or so later, on an afternoon bus trip outside the city, we kissed.

We only spent a week together, but we got somewhere in that week. He told me at one point, with...what will I call it, a sad happiness? A happy sadness? The beginnings of regret, maybe...that I had lit something in him. It's hard to describe. Whether he had wanted whatever it was lit seemed like an open question. 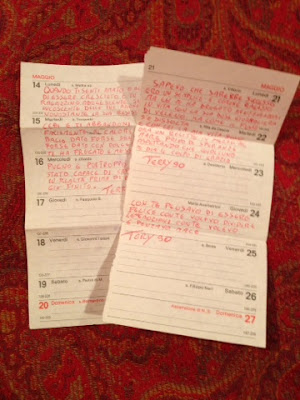 Here are some poems he gave me. In my memory, he had written them for me. But I remember looking at his signature that he wrote them three years before he met me, so they weren't love poems for me, personally. They were still a genuine offering, a little something from his soft side.

When I left Italy, he was waiting to be shipped off to Bosnia. He gave me his dog tags and a button-up shirt that I wore for a while, and we phoned each other for a few months. He planned to come to America, and we were going to live together, which seemed to me like a worse and worse idea over time, and I eventually stopped calling him, which made me feel guilty. I wondered whether he had lived or died.

He didn't die in Bosnia, like I'd feared. He lived and went on, Google told me, to become a very successful and well-loved special effects and makeup artist for the movies. He died, instead, a couple of years ago, in December of 2012, while I was very sick and scooting closer than I'd ever been to death myself. I don't know how he died. Google didn't say. 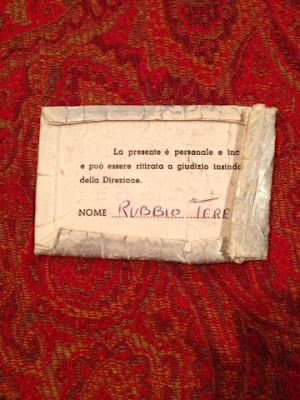 I was going to make this whole entry about and for Terence, but I couldn't do it. I didn't have the emotional and physical werewithal. I had to go sideways into it. But he was real, and we were briefly real, and although he was already so long ago and far away that he might as well have been in the underworld, now he's genuinely gone, which paradoxically brings him closer. This is something I like about death. It's like a lit match next to the memory banks, blazing them up, giving us a translucent, Technicolor show. But it's more than that. Whoever was yours once becomes yours again with time and space out of the way. Cleaned off, refreshed, reclaimed. That's what it feels like. Not central, maybe, but lightly, surely connected.
Posted by Tina Rowley at 1:30 AM

That last paragraph is so true, though I've never thought about it like that before. Thank you.

Regina Spektor had a song called The Wallet, in which she imagines a man's life through the items in a found wallet. This brief tour of a twenty years ago you made me smile and feel sad at the same time. We usually don't acknowledge it, but these past threads to other people have made us who we are today.

I have a box tucked away in the back of my closet, it contains bits & pieces of my life like your wallet does for you. It is always important that I'm in the right frame of mind before I haul it out and inspect its contents, but once I do, it is always a gift to me.

I've been thinking about this post for a few days. I learned over the weekend that my first boyfriend died last week. I hadn't spoken to him in over 25 years, but the immediacy of the loss took me by surprise and it keeps cropping up. This morning I realized he was the first boy to tell me he loved me. I don't know what to do with these feelings, so I thought I'd put them here where they might feel less alone among your own beautiful thoughts.
xo
Shawnmarie