I live in Seattle. Not born, but bred—I've lived here since I was nine—and I love my town. And we've arrived at one of those rare moments in history when the country is craning its neck up and to the left to see what the hell is going on over here.

But! See these guys?

Those are the guys a guy hired to beat up—I mean, play football against—the other guys, the guys of the cities who forgot about/hate our city! Those are our guys! They knocked those other guys down a LOT. And now we're goin' to the Superbowl!

Before I say anything else, you need to know that I love those guys. It's senseless, it's sentimental, but it's real. Like, I weep. I weep tears of pride about these boys. I'm like all of their mamas and girlfriends and wives and little sisters and big sisters rolled up into one. It's creepy, look, hey. Totally. I didn't pick just one thing to be, and now it's creepy but life is creepy so get over it.

And, for the football fans who are all I bet you only became a football fan a minute ago, put a dollar into your own tip jar! You're right. I only re-got into football last year when the Seahawks started doing well. I got into it a few years before, when the Seahawks were doing well, and then I was into it for a couple of weeks about thirty years ago, when the Seahawks were doing well and I watched them with my dad. I'm one of those what-you-call bandwagoners. Would you like to see my I-don't-care dance? You can't see it because you're not in my living room but I'm doing the Worm all the way across the floor and now I'm taking it up the wall. My love is perfectly good. If I walked it up to a Seahawk right now he'd take it and kiss me on the head.

But I haven't just fallen in love with the team. I've developed feelings for the game itself. Like, I'll watch games that don't have any Seahawks in them, even. And for this I have to thank Sportsvision, the company that created the yellow 1st and 10 line we see on TV superimposed on the field. Before that yellow line was there, when I was but a maiden, I couldn't figure out how far the big men had to go for everybody to get all excited. They made the ball go...THERE. Yay? No, that's bad. Now they only made it go right there and everybody's losing their mind. What's happening?? I'm cranky. Change the channel. But the yellow line made it all so clear, and now I can re-route all the energy that went into feeling confused and channel it into YES YES RIGHT THERE BAM GOT IT.

What I'm saying is no, I'm not the best football fan who ever lived. But I just don't think that matters. Fuck it. This is a golden time for my little Seahawk-loving heart and the heart of my misunderstood and I frankly think underappreciated city (which I will sing odes to another day). We're losing our minds up here and it's beautiful.

But I want to talk a little bit now about the Holy Trinity: Russell Wilson, Marshawn Lynch and my one true love, Richard Sherman. (We've been steady since he took it to Tom Brady last year.) Let's start with Russell Wilson. 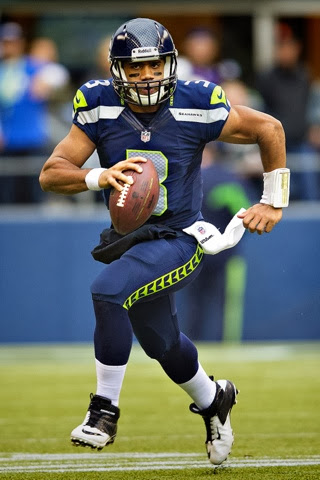 I'm not going to talk about what a good football player he is, mostly because that's the province of people who understand the game better than I do. I'm talking about the man himself. I watched an interview with him where he was talking about his dad, and how his dad always said to him, "Why not you?" and "Don't be afraid to be great." That's so simple, but it really got to me. Here's this guy who's been working like crazy to be the best, but in this sort of super-clean, humble way. The idea that it's not arrogant to go for greatness shot into me courtesy of Russell Wilson during that interview, and it came as news, and it set something in me free. I'm hanging it out here for you, you know? I don't want to be glib about this. I'm letting open a little window so you can see what I've projected on to our boys here, because that is such a powerful thing with sports, and with our heroes in general. They're out there carrying something personal for us, and that's why we love them. There were times in my young life when I purposely didn't try hard at this or that because I was afraid I'd be good at it and outshine somebody else and make people sad. For me, I adore how thoroughly Russell Wilson has gotten out of his own way in this life, and I'm taking a lesson. This little light of mine! I'm gonna let it shine! etc. 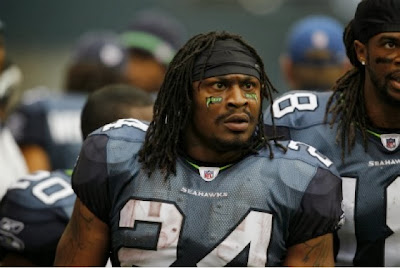 Okay, next up. Beast Mode! Our beloved Marshawn Lynch. You know, he didn't catch my eye right away. He's quiet and so I didn't find a personality hook with him. No, with Marshawn, it's the sheer joy of the power of the human body and the will not to be stopped. He's like a natural wonder. He's like Yellowstone. I gawp at the force of him, as well as his pure balletic grace. A great bear ate a cheetah who ate Baryshnikov who had just absorbed a radioactive Weeble Wobble and so it was that Marshawn Lynch came to be among us. Also, his parents had sex. I like to think of Marshawn Lynch going through his day with five guys strapped to him all the time: trying to bring him down on the way to the toaster, trying not to let him get at the shower gel, forcing him away from the mailbox. Meanwhile he's just making toast and getting clean and opening bills and it's no biggie. Plus here comes the greatest quote ever from a press conference yesterday. Man doesn't like giving interviews. Here it is:  "I ain't seen no talkin' win me nothin'." Fu-hu-hu-hu-hu-hu-huck yes! And blackout.

And lights back up because here we go. 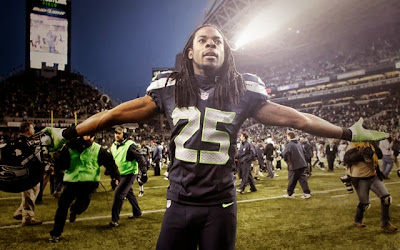 My very own. The man. My boyfriend, Richard Sherman. You've heard enough about him in the last week, so I don't have to tell you about his skills or his volume or his background. All I'm saying is hell, yes, honey. Don't you dial anything down one bit. This is a man who doesn't give a fuck in all the right ways. He's got his eye on the prize and he's taking it, and he doesn't have to be loved every second on the way there. And beware that brain. He has your number, whatever you are. Obviously, since I love him the most—so hard, so much—he's carrying a Very Special Message just for me. I've been scrambling to be liked/not get killed for most of my life for whatever stupid reason, and Richard Sherman is how tired I am of doing that. Self-censorship for crowd approval can go fuck itself. And we're in the Super Bowl. What I'm saying—and I'm just going to go ahead and merge with him—is that Richard Sherman and I are the best corner in the game. Don't you ever talk about us. Crabtree.

There are so many others I didn't talk about: Golden Tate, Doug Baldwin, Kam Chancellor, Earl Thomas, the mysterious and fascinating Percy Harvin. Papa Pete Carroll. I hate leaving people out. I could write a little haiku for everydamnbody but it's late.

So on Sunday I'm going to yell myself hoarse as the shattered parts of my own psyche, otherwise known as the best defense in the NFL, go up against our brand-new arch rivals, the Denver Broncos, who have the best offense and about whom I have no feelings and so I'm going to just call them The Banality of Evil. I'll be letting the Seahawks carry all my dreams and aspirations for a few hours, which makes no sense and feels so weird and horrible and great. I'm going to be a wreck, slightly drunk and splattered with guacamole and blue corn chip crumbs (team colors!) and so alive.

And it doesn't hurt that Sunday's game is taking place in the best state in the Union!

Looks like Chipotle agrees with you, by the way...

This. This is perfect. As a Cleveland Browns fan, I understand the bane that is football. But I love, LoVe, LOVE the game! You have put your heart and soul into the Seahawks, as you should! Do not be ashamed! Enjoy your Sunday! Go Hawks!

You are just the best. THE BEST!!!

This, this, this here is BRILLIANT and describes perfectly my journey with football over the last 6 months. Thank you for describing it SO eloquently. And even though I got Richard Sherman on the "which Seattle Seahawk would you be" quiz, you described MY boyfriend Marshawn delightfully.

ah, you've nailed it! I cheered for the Hawks back in the early 80s when Dave Kreig led them to the AFC West championship, then sorta lost interest until they started doing well again, and now I actually listened to Steve Raible and Warren Moon call the game on the KIRO several times this season because I don't get cable to watch games on ESPN at my home. But mark my words, I'll worm my way into a Super Bowl party somewhere or even just a sports bar in Ballard this Sunday. GO HAWKS!

Kinda makes me want to watch football :)....no, i won't. But I enjoyed this immensely because of your spirit and fuckits!

I love your enthusiasm, your passion for a game I will never ever undertand, your vibes. makes me want to watch football, if only to see what you see. I know you will, but dont ever change =)

Please feel free to talk about Percy Harvin. We miss him so in Minnesota.

About 25 years ago, I wanted to learn about football because I wanted to be able to impress the guys at the bar. So I asked my teenage son to teach me about it. He did just that by watching games with me, answering my (stupid) questions, and since we lived in Kansas City, about 4 miles from Arrowhead, with the windows wide open so we could hear the crowd.

Somewhere along there, I forgot about the guys at the bar and learned to love the game. In spite of living in Florida now and having a team (?) in the same city, I'm still a Chiefs fan and I'll see your Richard Sherman and raise you a Tamba Hali. :)

Congratulations to the Seahawks, and good job beating the Broncos (us Chiefs fans love anyone who beats the Broncos).

I came on here to say I loved your Oscars fashion review so much I had to read more and when I saw this about the Seahawks and my own dear Richard Sherman, I sort of felt odd because it was seeming like maybe you and I are the same person only I was born and raised here in Seattle so there's that, but then I saw the person two people above my post signed themselves as mittens and now I can't think of anything but that. Thanks though, your writing is geniusly fun to read.