in praise of vegemite

What is one of the ways that I know my marriage has taken?

Dave introduced me to Vegemite, after we had fallen in love and were briefly separated by a globe. We would send packages to each other full of books, letters, CDs, treats. In one of his packages was the salty spread of his heart. 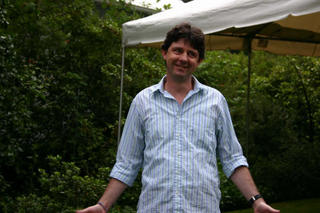 I didn't exactly hate it, right off. Dave counselled me to begin my Vegemite odyssey by buttering a piece of toast, and then putting the thinnest, teeniest layer of Vegemite on it as possible. I did that, over the phone with him, in one of many conversations so long that when my long distance was finally cut off and the horrible sum I owed the phone company was revealed to me by an unsuspecting customer service agent, I swore at her uncontrollably for maybe five minutes. (Shameful, shameful five minutes.)

(But also, fuck AT&T. They could have warned me about how high the bill was getting! MCI DID. Fuckballs.)

I bit it. The toast. Um. Well. All right. Hmm. My immediate feeling was, plain buttered toast, it is so good, so why, why? Why did we do this? Why did we put weird thick soy sauce on it?

(This reminds me of my old friend Jessica, who in college used to do these wonderful little tiny drawings, always with a little mundane object in it...well, I will try to recreate one for you, in cheap MS paint form. This will not be as good, but all right.) 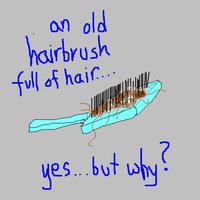 Jessica's handwriting/drawing skills were infinitely better than this.

So, now, nearly two years have passed since I was first introduced to The 'Mite. Dave and I have been married. Twice. Once in a courtroom, to get our immigration ball rolling, and once in THE BEST CEREMONY EVER, in my mom's garden about a month ago. And something started happening recently, wherein when Dave has been making toast for us, I've started asking him to put a little Vegemite on mine, for the hell of it.

And now it's escalated to this; I ate four gigantic slices of toast this morning and I scraped the jar of Vegemite clean to get them all dressed up for myself. Then, in the evening, I went off to rehearse for a play. All during rehearsal, a small part of my mind was like, we're out of Vegemite. I'm going to go to the store later. We need some Vegemite. Breakfast is coming. And right after rehearsal, I screamed it on over to the store and bought two jars, so we would not suddenly run out.

Dave and I are truly, truly married now.

I have never eaten Marmite, but Dave has, and he feels that it sucks.

When Dave was 17, he was in a band called "The Happy Little Vegemites". They took their inspiration from this.

This is out there, and it is weird. 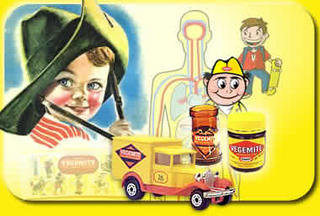 I know exactly what you are talking about. :)

I picked up so much from my love of life, its as if I was absorbed into her way of life.

and just for the record.

How does Dave feel about peanutbutter?

Dave likes peanut butter. But he doesn't get the whole peanut butter and chocolate together thing. He finds that weird.

btw, vegemite is a great hangover cure (packed full of vitamin B) --- I lived with an Aussie crew for a year

Ah, yes, vitamin B! I'm glad you brought that up. I forgot to mention its fabulous vitamin B-ey-ness, and was going to edit the post to get that out there.

Anonymous said...
This comment has been removed by a blog administrator.
10:03 AM

Aah, vegemite... sort of like the Spam of Australia. Lovely to hear your worlds are joining so beautifully! I love that "he had you at fazheeta!"

Anonymous said...
This comment has been removed by a blog administrator.
10:25 AM

The only frame of reference I had for this substance was the line from the Men at Work song, Down Under.

"Buying bread from a man in Brussels
He was six foot four and full of muscles
I said, "Do you speak-a my language?"
He just smiled and gave me a vegemite sandwich"

I didn't know the word was vegemite until like two years ago, I would always mumble through that part of the song. Maybe I will have to try this stuff out...can a whole country be wrong?

Try it out, I say. A good way to launch into it might be to eat too many sweet things. Get that salt craving running.