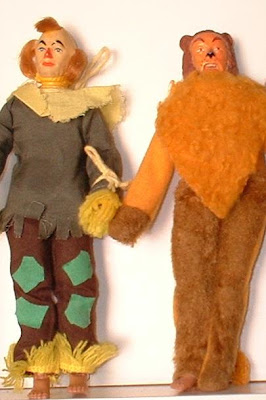 A poem for you, and then an explanation of the photo above.

My "you" came to the city to visit
me: clouds rushed between us

& the sun. The albums were finally full.
Halfheartedly we looked through the lenses,

fish-eye & wide, but we'd had enough
likenesses taken. Similes were simply out

of the question. The blind man, regardless,
said, "Please a little light so I can see

my love." (He'd gone through
seven doves without even knowing it.) In bed,

the surveyors held their aching heads.
Satellites caught our thoughts and held them.

Then snow fell in between two trains;
then fleas swirled in the hoof-dust; & when

we looked at each other we didn't look
alike. I kissed your magnifying glass

& said, "When the aliens come,
they'll know we're inside our cars."

When I was small, I didn't have Barbies. They were too provocative. So I had wholesome alternatives - European dolls named Sindy, Princess Leia, some tall drinks of water named Darcy who were pretty much Barbie with a touch less rack and name recognition. But in the absence of Ken, who got lumped in with Barbie - bad crowd, I guess - my ladies were short on dates.

The lucky bachelors pictured above scored by default. Eight inches tall to the ladies' ten or eleven, when you stripped off their clothes, they had humanoid wrestler bodies in cobalt blue plastic briefs. They squired the ladies around until the Sunshine Family Dad came on the scene, also a touch short but indisputably more presentable. When SFD took over, I'm sure the Scarecrow and the Cowardly Lion were like, "Fuck that guy."

Now here's a cupcake recipe. I don't know if it's good, I haven't made it yet. -Edit: Yes I have! Keep reading below the recipe! - I'm making it later today, with the addition of coconut extract. But I was too impatient to wait to post this. So, you know, here's a crap shoot for you:

From the book cupcakes! by Elinor Klivans,

If you double this recipe, just use three whole eggs.

Sift flour, baking powder, baking soda and salt into a medium bowl and set aside.

In a large bowl, using an electric mixer on medium speed, beat the egg and yolk
(or eggs, if you're doubling) and sugar until thickened and lightened to a cream color, about 2 minutes. Stop the mixer and scrape the sides of the bowl as needed during mixing. On low speed, mix in the oil and vanilla until blended. Mix in the sour cream until no white streaks remain. Mix in the flour mixure until it's incorporated and the batter is smooth. The batter is ready to bake, or for additions such as nuts, fruit or other flavorings. (Coconut, I'm looking at you. -Tina)

Bake on the middle rack for 20 minutes, or until a toothpick comes out dry. (From the cupcake.)

You're on your own for frosting the bastards.

Edit: I made them. There they are. And OMG. They're good. I put 1/2 tsp of coconut extract in there, and some in the frosting (Betty Crocker out of a CAN, hosers)...like tanning lotion in cupcake form. Mmmm. 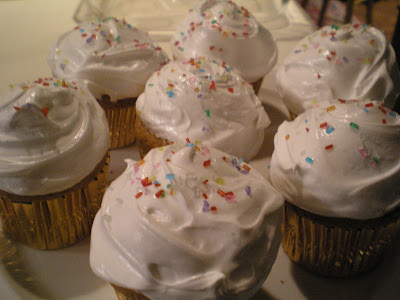 the coconut cupcake seems to be the gateau de jour, so to speak --- I just mafde teh Barefoot Contessa's recipe and, to quote you, OMG!!