1. Oscar dresses and what I think of them.
2. A cake I made for my belated father's birthday.
3. There have been requests for Finn photos.

It's going to be long.

I can only talk about the dresses, really, and not the actual awards. Having a baby pretty much knocks out that year in movies for you. I should have piped up about the Emmys. Those I was qualified to discuss. Lots of time logged in front of the television this last year. 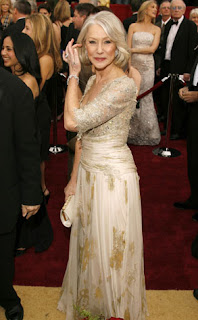 Helen Mirren is so foxotronic. I'm going to throw in her Golden Globes dress for confirmation, here, because I loved that color. 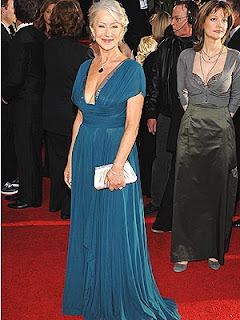 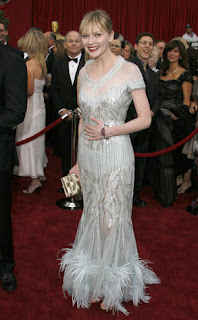 Kirsten Dunst is a sartorial train wreck in her everyday life - AS AM I - but I like what she does on the red carpet. And I like this weird little groovy demure Chanel business. 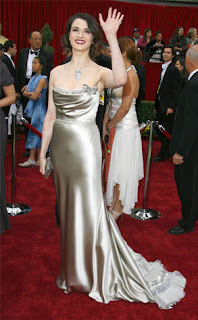 I thought Rachel Weisz looked ravishing in the extreeeeeeeeme. 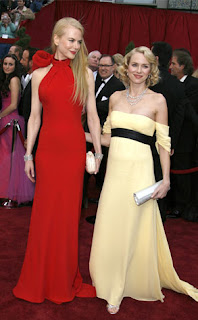 Nicole Kidman. At first I was like....."?" And then I loved it. It's like Alice in Wonderland ate the Queen of Hearts. I also like Naomi Watts in this creamy yellow thing. 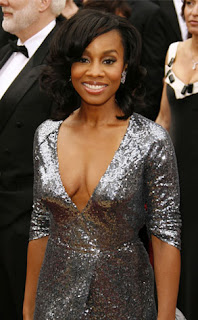 Anika Noni Rose - I love things like this. I love the cut and the simplicity and the lack of jewelry. 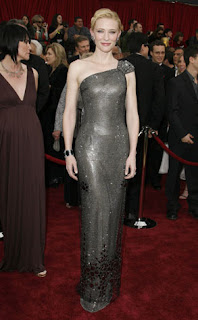 Cate Blanchett, it's like it's not even worth mentioning it anymore. How great it always goes. I actually would like to see her fuck up now. Next time, please fuck up. I seriously think she can't do it. I am throwing down the gauntlet. Try to dress badly. I'll give you five dollars, Cate Blanchett.

On the other hand, here's a small parade of people who dressed in unfortunate Southwestern colors that don't suit them. 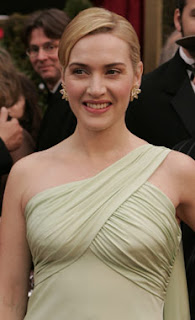 Kate Winslet is usually so stellar. Here the sour cream drowned the guacamole and then the Grand Canyon spat up a little lipstick and made out with her. 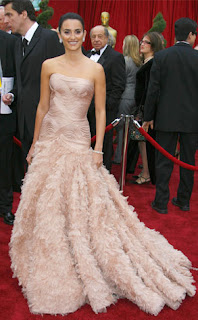 This putty color is a bummer, Penelope. Adobe floor. Boo. 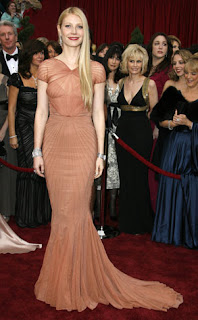 Gwyneth Paltrow would look great, I think, if she weren't wearing this terra cotta shade that doesn't have anything to do with anything good for her.

Moving on, we have the puzzling Eva Green. 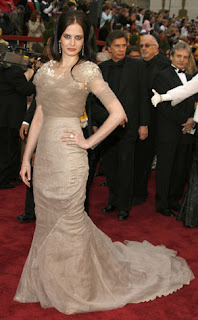 When she came out to present her award, I loved her dress. But then her gothic hair and makeup troubled me. Now I'm just troubled. But I feel like I could see a different picture and then love it again. I don't know what's going on.

My dad died two years ago and I made this cake for his birthday which was last Thursday. (Long story behind it. Tell you later, maybe.) In any case, I'm a baking wizard these days.

We're building a house right by my mom's place, right? So this cake is our two houses on some chocolate cake soil with green coffee frosting grass. The houses are white cake. My mom's house is the one with white frosting. It's got lemon filling because she is a freak for lemon. Her sitcom would be Everybody Loves Lemon. She says that all the time, that's a quote. She says it very definitively. The gavel has come down when she says it. She is a motherfucking out-of-control lemon advocate.

Our house-to-be is the purplish one. It's got plum filling, as some great plum trees are getting uprooted in the cause. Note the hazelnut path and the hazelnut shingles. What possessed me?! And I baked these bastards from scratch. I've never baked a cake from scratch before. Suddenly I baked three and piled them on each other. And they're delicious, if sort of retarded and abstract. Lookatem: 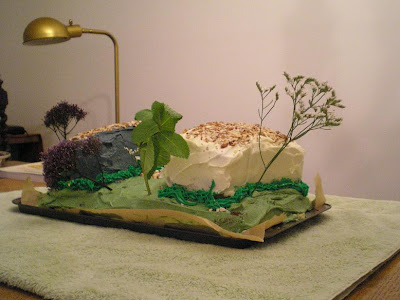 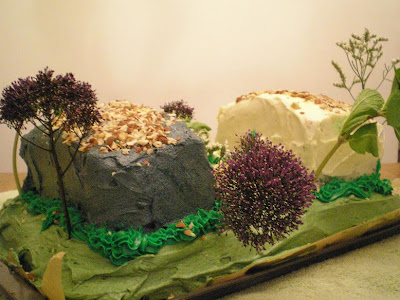 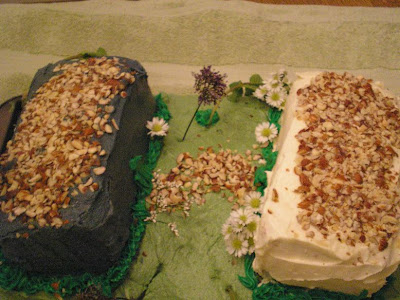 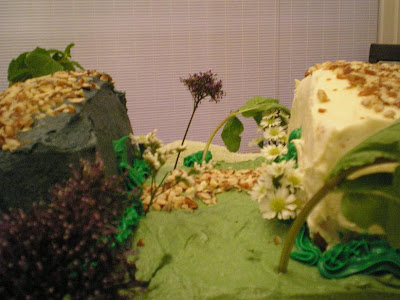 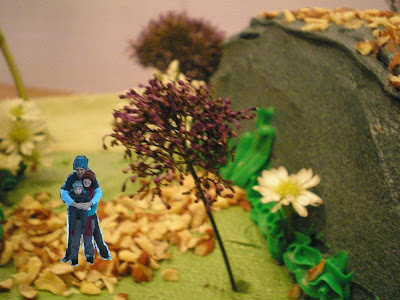 Yeah, it's bigger than you thought.

Oh, this boy. This BOY. After I breastfed him the other day and he was lying on my lap smiling up at me, he suddenly said, "Hello." I was like, DOING!!! (doing = my eyes popping out of my head) And on that same day, he allowed sweet potatoes to enter his mouth, repeatedly. His previous stance was fuck vegetables and fuck you for offering them to me. Every now and then he likes to blow my mind. You like that mama? Yeah. Mixing it up. Coming at you from the left, and then coming at you from the right. You don't know how I feel about vegetables. Maybe I like them now. Maybe I don't. Maybe I speak. Maybe I walk. Maybe I don't. 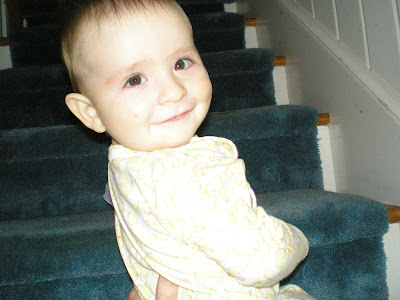 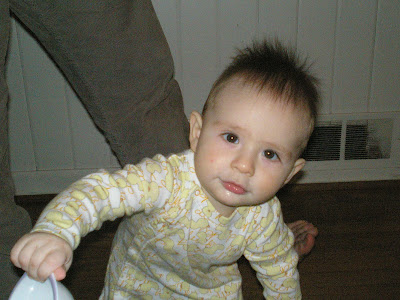 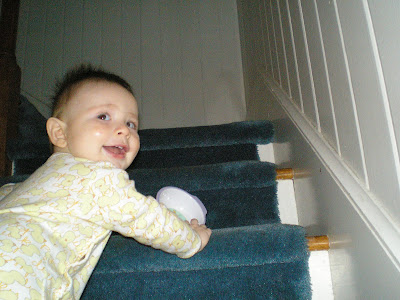 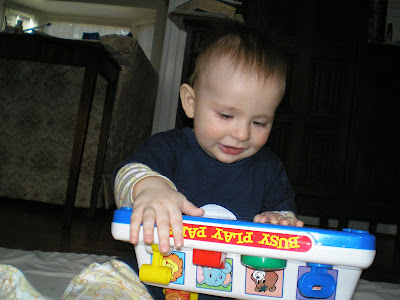 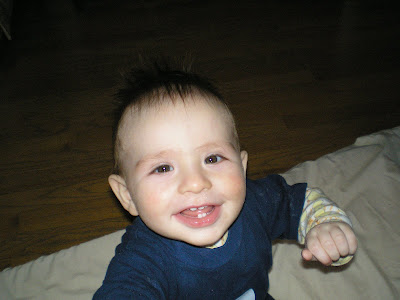 Finnaroo. I brought him into our bed the other morning, and when he saw Dave, he said DADA?!?!?!?! so incredulously I don't know if I can get it across. Dave said it was as though Finn spotted him out of the blue in a marketplace in Cairo.
Posted by Tina Rowley at 10:47 PM

I love the cake! I also love Finn's little teeth and his spiky hair.

Things I loved about your post: spiky hair (I agree Ash!), the comments about the dresses (I agree with most of them except Kirsten Dunst- I just feel someone younger than me shouldn't look like my grandmother) and the knowledge that someone else is a lemon freak. Lemon over chocolate anyday.

great post! it was almost as satisfying as eating a piece of that cake. i shall think of nothing else until i have a piece of lemon cake now. i must have some lemon cake.
did Finn really say, "hello?"
ohhh. i can't wait to meet him. soon! we should talk on the phone soon. xo.

I love to see Finn having so much hanging out! And I want some of that cake!

My notes on Oscar gowns:
Helen - agree
Kirsten - disagree
Rachel - OMG so gorgeous
Nicole - disagree. can't get behind it. but naomi - WOW! i just read in US weekly today that she might be preggers - hmmmmmmm?? last night i hadn't noticed but that yellow dress does allow for a little bump!
anika - agree
cate - agree, agree, agree. as i said to pete last night "gorgeous AND talented!"
kate, penelope, gwen - agree
eva - love the dress, not the goth head.

How can one focus properly on foufy dresses and cake artistry when there is a grinnning, walking, betoothed FINN charming the hell out of everyone on the computer screen!!!???

Oh, Finn. You had me at gahbahbahgagada.

anika was a student at ACT when i was hanging around there. she used to get on the MUNI for 35 cents because she could pass for under sixteen.

i hope that motherhood does something to you, because i seriously think if someone de-attached from my boob and then was like, conversationally, "hello . . ." i think i'd lose it a little.

The hair the hair, I want to ruffle that hair.

All the Oscar women are too skinny, fuck 'em all I say, for gods sake eat something you celebrities!

Great post, sorry haven't commented in a while, life kicking my bum a bit.

Finn is the hairgrowing war winner.

I love the cakes.

Oh yes, I'm late to this but what a good post!