i've never seen you looking so lovely as you did tonight

And I've never seen that dress you're wearing or the highlights in your hair that catch your eyes. I have been blind.

It is finished. It is written. It is gone with the wind. It is written on the wind. The red dress party arrived like the day and passed like a cloud. I made a wish. I said it out loud. Out loud in a crowd. Everybody heard. It was the talk of the town.

I think I...let me think...I think I can be done with the song lyrics now.

Yes. So. The red dress party has come and gone, and it was very fine. 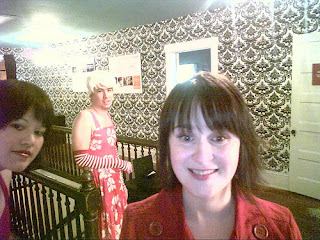 Here I am at the McLeod residence, just before the party. Do I look relaxed? I hope so. I hope so, because I was so nervous to be a DJ that I actually lay on a bed and listened to a relaxation cd before leaving the house. I KNOW. IT'S SAD. But it worked. I relaxed.

And I might as well have because I had the first DJ shift - before anyone was drunk enough to dance - so it was pretty much me standing behind a table in a mostly empty room. I could have taken a bubble bath and done my job at the same time. 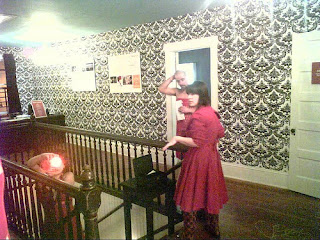 Here I am waiting to greet the first arrivals, with dear DJ Shafty Shaft nearby. He had the later DJ shift. Naturally the joint began to jump during his shift! I remind myself that I created the pool of songs out of which the joint jumped. This makes me feel better. But I have to give props to ol' Shafty! He reads the room and does what needs to be done. Kudos, Shafty.

But really, there's my dress and there - oh so faintly - are my boots! I imagine your first thought is: 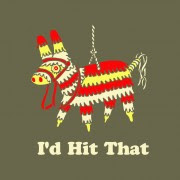 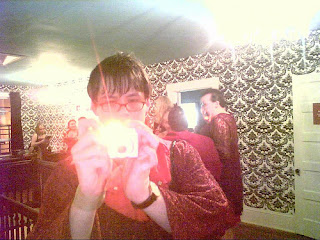 This bespectacled, flashing gentleman is from our local hot newsrag, The Stranger. He is their Party Crasher. He crashes parties and files a report. This is what I think his report will say:

A charming woman greeted me at the door. She sweetly told me where I could hang my coat. She admired my medieval gown. She was the evening's first DJ. Had anybody besides me been in the room while she was "spinning"*, they would have been whipped into a Dionysian dance frenzy. Instead, she told me that she was lonely being the DJ. I talked to her for as long as was polite, and then made my escape.

*standing lamely in front of a laptop not doing anything

Look, here are people at the party: 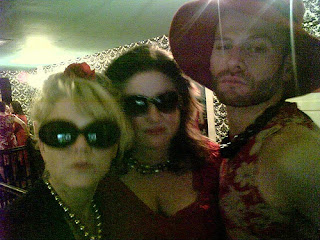 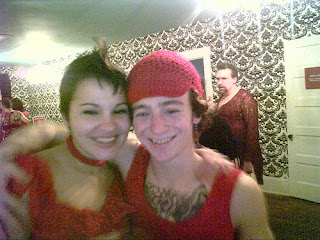 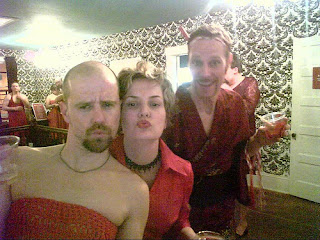 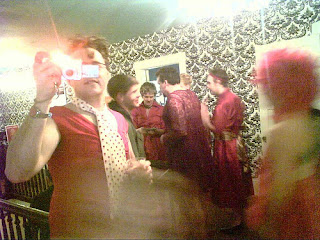 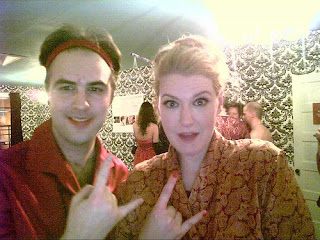 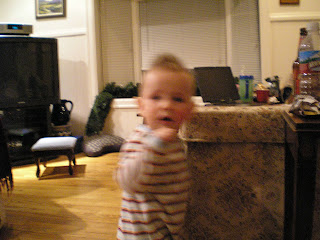 Could it be because he has taken his first unsupported steps? And he is thus always moving lightning fast? Okay, even though he only took two of them - and I can't even really believe I saw what I saw when I saw it* - I still aver that this is why the photo is blurry. He is moving fast. And it is not because I am a bad photographer.

*Yeah! I mean, I really think it happened! He was in his playpen over....here....and then I held up this toy over....here....and he was like, oh, I should step over and see that toy, and he then totally forgot that he can't walk and took the two steps over not holding on to anything! It hasn't happened since, and I'm still rubbing my eyes and blinking. Did I see what I saw? I don't know!

Another funny thing is I overheard my mom on the phone bragging to someone about Finn. She said, "He's in the 75th percentile." But she went ahead and didn't specify what it could be referring to. Height? Weight? Awesomeness? Civic pride? Who cares! 75th percentile, motherfuckers!

It's height, by the way. His awesomeness percentile is the 105th.
Posted by Tina Rowley at 12:18 AM

I am sure Shafty has skills but you did warm up the crowd - that's a tough job!

Woah. I wish I was there. You look awesome, with the cute hair, and outfit and everything- and ohmigod, the COOLNESS! I would be putting Tina PhDJ on all of my correspondences form now on.

And Finn? Stepping around? He is a FETUS, for the love of all that is good and holy! He was just born, like, 12 minutes ago or something!
So handsome, and soooo smart. Look out, baby ladies!

He's such a beautiful boy! Man, once they start moving, it's troubletroubletrouble. Mine climbs on the dinner table now, prestochango. I'll turn around for a second and then turn back and there he is, standing on the table. You are totally in for it.

Oh darlin. It's too late to respond to this but perhaps you continue to check these comments long after their due date. You were wonderful. The party took awhile to get cookin and I was lucky enough to get them when they were drunk. But believe me, I know the sorrow of the lonely dj. Only too well.