savage beasts will be soothed on saturday 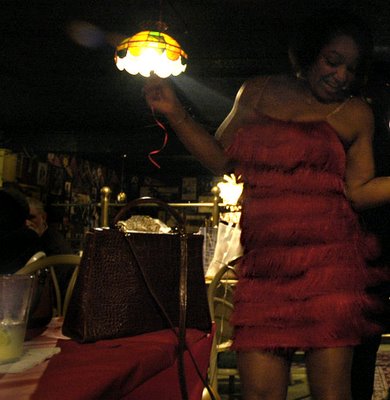 Sweet relief, lords and ladies. The music playlists for the

have finally been completed. Oh, mama. Five plus hours of dancing songs, five hours of songs to make out to in the makeout room. (Did I mention that there's a makeout room? There is. Pa-chow.) Some music to start the party, some music to wind the evening down. It was a giant task, but you know what? I'd rather spend 15 hours putting music together than spend half an hour on the phone asking strangers to donate goods or services. Gack.

There's more than a little bit of neurosis involved in DJ'ing a party, though. My dear friend DJ Shafty Shaft can corroborate, although he is proven to be inspired at it. You're laying your total musical cred or lack thereof out on the table for all the world to see. (Well, not all the world. We're only selling 150 tickets. Several billion people will have to miss out.) (If you're coming and you haven't purchased your tickets, I'd do it soon for it will sell out for sure.) (Click on the words red dress party up there to go do that.) Now, I don't know what the kids are listening to these days. Each year I maybe manage to incorporate one or two new bands into my heavy rotation, and become familiar with maybe...what...like...five more? Maybe? But I have, I can state with certainty, a very entertaining music collection. It's guilty pleasure central. I buy the wack things so you don't have to.

The trick in putting together this playlist was figuring out how to balance out the retarded treasures with more...oh lord, what would the word be?...it will be wrong...legitimate songs that even sober people could be seen dancing to without embarrassment. See, and the problem is, what are those songs?? I think that only special musical people know! Me, I'm blind, as it were, and I had to guess! I had to go totally by instinct. We'll see on Saturday how I did.

Def Leppard's "High and Dry" is thumping out into the room. Everybody stands still and glares in my direction until someone drunk enough shouts out, "The DJ sucks!" Then everybody cheers and someone from my theater company sighs and comes and shoves me out of the way, rescuing the party with legitimate music from deep in his laptop. High and dry indeed!

People are sweating, their knees are buckling, but they refuse to leave the dance floor. Kris Kross? Inspired! Electric Six? I'm not leaving! Britney Spears...ok! You've earned it! Who's the DJ? Who's the DJ? everyone is murmuring around the room. It's her!

I love her and I also love her plaid boots! 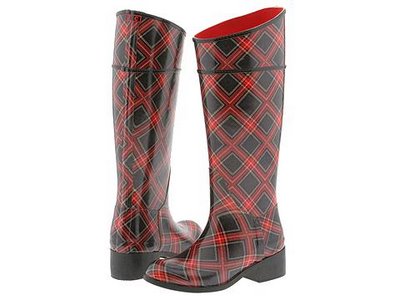 I ordered these from Zappo's. I hope they fit! They should arrive tomorrow. Rainboots will suck all the good out of my dancing, but my red dress is sort of a trenchcoat-turned-dress so I'm going for sort of a totality of look here.

Now. Also. Do you like chocolate chip cookies? Then make the recipe on the back of the Ghirardelli chocolate chip bag. Do it with walnuts. Are you fatally allergic to walnuts? Is it worth dying to put the walnuts in there? I don't know. I don't know. Maybe. Maybe it is. I leave that up to you.

Note: While editing this post, I discovered I'd used the word "certainty" like five times. And I remember holding back on the word a few times since I had a vague feeling I'd used it. It was with certainty this, without certainty that. So I cleaned it up, but man. Someone's all tethered to the idea of certainty this afternoon.

I made Ghirardelli brownies the other day - delicious on their own, but even better when you add fudge sauce and white chocolate chips to the mix! Yummmy! One of my friends ate 12 of them - in ONE night! :)

Hey! Just happened into you blog and wanted to say hello & two things:
LOVE the boots! x100
&
I think I've made that cookie recipe (Or it was on the back of something else, pretty sure it was this brand) and it is good, but even better when you chop up the actual candy bars and add those too. (Maybe instead of the nuts?) It ends up being more chocolate than cookie, but it is love.