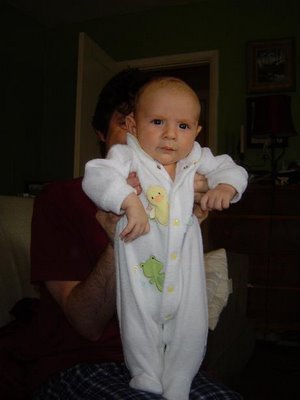 It seems that Finn can't get enough of the song "Tuxedo Junction". I started singing it while burping him, and it soothes the savage beast. Never fails. I suspect he was a swingin' bandleader in his previous life, or at least some type of swingin' cat.

Here are the lyrics:

Feelin' low...
Rockin' slow...
I want to go
Right back where I belong

Come on down
Forget your cares
Come on down
You'll find me there
So long, town
I'm headin' for
Tuxedo Junction now


Sing that baby to the tune of "Tuxedo Junction" !


And now, here's a tiny excerpt of an interview in The Believer, wherein the author of the Lemony Snicket books is interviewing Jack Black. They've been talking about weddings, and wedding attire, and renting vs. owning tuxedos. Jack Black rents. Daniel Handler owns, and elaborates a little:

Daniel Handler: It’s nice to have a tux because sometimes you can just put it on and wear it. It sort of shocks the hell out of people.

Jack Black: [laughing] Do you do that?

Daniel Handler: Yeah, I just wore it to someone’s birthday party. If you really go all out and it’s not a sarcastic-looking tux they just don’t know what to do with you.

If all goes according to plan, Finn'll be the kind of guy who'd do that. I just gotta figure out whether to use reverse psychology or just basic forward psychology.

*Finn in his first tuxedo, a white appliqued terry cloth footed number. Shut up, it's a training tuxedo.

Oh my God... that is the exact same tuxedo that my husband wore to our wedding... except the duckie was a giraffe. Small world.

And he's already got the, "What are you lookin' at? You never seen a guy in a tux before?" look down COLD!

that little dude is awesome. i wonder what's on his mind?