Yesterday I got to revisit an excellent joke with my friend Stephen. And, if you have access to a piano, you can play, too! You don't have to know how to play piano, either. It's better if you don't, actually.

You are going to play Great Balls of Fire just like Jerry Lee Lewis, only better. 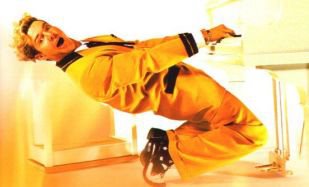 This picture of Dennis Quaid as Jerry Lee Lewis gives you an idea of
the sort of spirit I want you to bring to this thing. Plus he is so very hot.

Everybody knows the rhythm of the song, right? And everybody knows how to put their finger on the right side of the keyboard and drag it down to the left to make that trill that's like, SHOWMANSHIP!!

So, every time where there's a "boom", just bang on the piano with both hands in any old place in any old position. Just do it in rhythm! You don't even need to make piano hands if you don't want to - you can let your hands be like big dead meat pads.

Blunk Conk Doonk MERNK You broke my will...

And sell it! Sing it out! Go nuts! When you say "Feels good!" let there be NO DOUBT that it feels good! Look surprised and delighted all the time at how good at piano you are! And when you do that trill, give your audience a look that's like, oh yeah, here it COMES, MAMA.

You can pretty much stop after "Want to tell this world that you're mine mine mine mine". You will have been awesome enough for long enough. Everyone will have had time to be impressed.
Posted by Tina Rowley at 9:05 AM

oh damn! just thinking about this gag has me laughing. i love it. it really is funny every time but you're right, it's all about selling it....

Goodness Gracious! That sounds like a hilarious game where everybody wins! I wish you could post a video clip of it.
I need to get my hands on a piano somehow...

Um, SO FUNNY!
I love the writing out of the bad notes. We have a bad almost unplayable piano at Live Girls!
Please, please, please, please come do this at a cabaret or something.
It must be you too.
I need to see it.
Please?

Ah, Meg, I'm flattered that you would ask me. But I must say, though the comedy in this joke seems robust and portable, I'm afraid it might be more delicate than it looks. I think the humor could not survive in such a formal setting. I think this joke has to be tossed around in a casual setting, or there would be cricket sounds.