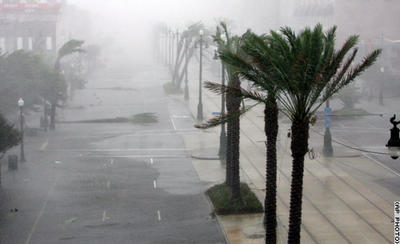 I don't know how to carry myself during these disasters.

For instance, I'm strangely conflicted posting about this. I guess it's good because it's one more place to catch someone in the mood to make a a donation. But some voice in me says something like, you don't have the right to talk about this, it's not yours. I understand that the tragedy is humanity's, and I'm a member of that group. But there's a free-floating wrong feeling that strikes whenever something like this happens.

Sometime in the afternoon of September 11th, I got up to make myself a plate of food. This seemed indulgent in some way, or blasphemous, something. We had some leftover Thai food and I put some on the plate, and then I decided that I shouldn't heat it up. Heating it up seemed like going over the top into totally disconnected, Marie Antoinette territory.

I've been looking on Craig's list at the people who are offering places in their homes for Katrina refugees. Most of those entries I find unbelievably touching. One man, however, was offering a place for female Katrina survivors only. No, no, don't let it be. Don't let some guy be trying to capitalize on this fucking tragedy by hitting on its female victims. Don't let that be why. Fuck.

And I feel guilty that we're not opening our Seattle home to Katrina refugees. I'm so impressed with the people around the country who are. (Mostly.) And then I think, why aren't we? Do we have a good reason? And then I have to come to terms with the fact that maybe I'm just only partially good. I don't suck, I realize. I'm fine. I'm basically kindhearted. But it feels small and ugly just the same.

Well. Anyway. Please donate. A little or a lot.

*edit: Holy shit. Read this. They just keep it coming, don't they?

**new edit: Now I'm hearing on the news that they're diverting a large number of forces in New Orleans from search and rescue to the anti-looting beat. Are you shitting me?!
Posted by Tina Rowley at 1:46 PM

I've already donated twice. I'm so upset about all of this.

But, as you've illustrated: tragedy brings out the best in our society.

It's just baffling, the whole tragic situation. I'm at a loss for words. Thank you for posting the Red cross link.

Did the rest of that article mention the 3rd most likely disaster? Seems like with 2 out of 3 covered they might want to take a closer look at the list. I am so tired of hearing about such preventable tragedies.

I hear you about the feeling indulgent thing. On the Friday after sept 11th, I went to the park with my wife and watched the sun set over the river. I thought to myself "Can I just enjoy this beautiful day without feeling so guilty and horrible?"

Of course, in the wake of Katrina, my only feelings are those of tremendous *RAGE* at the bumbling incompetance of our leaders. It's absolutely sickening.