you must be *this* tall to Ride The Hormone 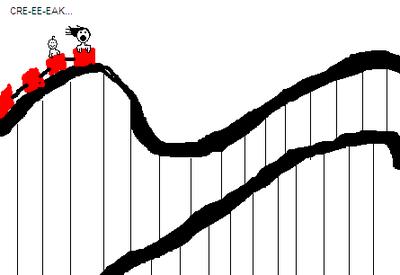 This is all so new. My word. Senator Rowley is not even the size of a kidney bean - the child aspires to be the size of a kidney bean at this point. But this teeny locus of life is the most powerful little wizard I've ever run across. The child pulls all of my energy into its little domain like a tiny god. The child has all the sucking power (and none of the darkness, I might add) of a black hole.
(I made that green so it would be clear that my impending baby is no vacuum.)

The child has my feelings on a string. If the child wants me to feel that the plate of toast Dave is bringing me is unbearably touching, then there I am, feeling it, weeping up at the toastmaker with unutterable gratitude. If my child wants me to feel fear and awe and sadness at the fragility of life, then there I go, vulnerable and petulant like a small tiger. If I bat my claws around, the child and I will be safe.

The new world I live in doesn't feature:

*ibuprofen!
*sweets - don't want them. what??!
*decaf coffee even - feels wrong
*casual movement through the world without hyper-tummy-awareness
*large amounts of inner patience, in a previously inner patience-rich self

The new world I live in features:

*ventriloquism: both the papa bird and I provide frequent voice-overs for the small bean
*sudden copious weeping, in what was already a weep-rich environment
*disbelief that these babies do this all the time -- start so tiny and get so born
*great feelings of vigilance
*impossible dedication to vegemite in all swallowable formations

I'm in rehearsal for a play - that's going to take place at IKEA (!) in those little roomlets - and our play has some dance sequences in it. Our choreographer knows that I'm pregnant, and she's a mom herself, so I know that she's got my back regarding sketchy moves that could put the senator in jeopardy. But every time she introduces a move to the rest of the cast that seems like it would be rough for me - EVEN IF I ALREADY KNOW I WON'T HAVE TO DO IT - my mouth begins to quiver and turn down at the sides. Embarrassing! And tonight, I came to rehearsal weeping from nothing but exhaustion.

World, if you have some slack, I'm going to have to ask you to
cut it for this pregnant freak.
Posted by Tina Rowley at 11:45 PM

Mr. Hormone's Wild Ride doesn't stop altogether until well after you're done cooking the bean, but just know that things will settle down a bit soon. A little less surging, a lot more energy.

The whole time I was pregnant, any time I listened to music with a thumpin' beat, I cried. I'm sure people in the car next to me at the stoplight wondered what it was I found so weep-worthy about "Get Ur Freak On".

omg. i love this. that picture is so great. i love that you are craving vegimite so hard. that's a little aussie bean you have there mate.

I love to hear all of this stuff too- so funny!

I know a couple who almost got divorced because he ate the last piece of cheese while she was in her 3rd trimester. He came home to find her crying hysterically while digging through the garbage in a blustery rage for the cheese wrappers. She could barely speak throught the snotty sobbing, all he could make out was "bastard", "dishonest" and "selfish". When she became coherent again, she attacked him.

He was clearly in the wrong.

well, just remind yourself that when the pregnancy is over everything will go back to normal, you will be so well rested, there'll be no weeping, life will be easy again...and if you believe that i've got some farmland in Alaska i'm selling

Hang in there, Rowley... do it for all us future mothers,* terrified out of our gourds at the prospect of bring life into the world...

oops, didn't mean to publish that anonymously... that was me.