there but for the grace of god goes jimmy connors

I loved him for an academic year.

xoxox He was Bjorn Borg. xoxox

I didn't even like tennis, beforehand. FOREHAND! (I haven't played tennis in twenty-two years. Is it a forehand? The one that's not a backhand? Yeah. I was really good.) But then in November of my freshman year of high school, I went with a few friends to see an exhibition match between Jimmy Connors and Bjorn Borg. 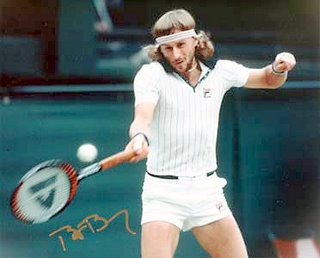 We were sitting behind one of the ball boys on Bjorn Borg's side. (Do they switch sides?) (Twenty-two years.) I was eating Skittles. Bjorn Borg lost an important point to Jimmy Connors. He turned to get the ball from the ball boy.

I caught his eye.

I shrugged and made a "Meh, what are you gonna do?" face to him.

He shrugged back with the same face!

I suddenly loved Bjorn Borg and tennis itself. The bag of Skittles I was eating became the Shroud of Turin. I carried it like a holy relic in the plastic pencil bag that hooked onto the inside of my three-ring binder. Although I had never played a sport in my life for more than the ten minutes it took for any P.E. teacher to give up and let me sideline myself with a fake injury, I decided I would join the school tennis team. I even joined a community tennis team for a minute, concurrently. Also, I subscribed to Tennis magazine.

This bag of Skittles is a re-creation. A dramatization, if you will. The actual bag was not a bag of "fundraiser" Skittles. They were just regular non-fundraising Skittles. Although I suppose all Skittles are a fundraiser for the people who make Skittles.

*Carling Bassett! The Anna Kournikova of 1982. Surely you saw the tennis movie "Spring Fever", in which she co-stars with Susan Anton. Because I did.

Our tennis coach, Mr. Case, kept yelling at me, "Footwork!" And in my mind I was like, oh, footwork....footwork's irrelevant. You don't play tennis with your feet. You play it with your hand! Check me out....fooomp! 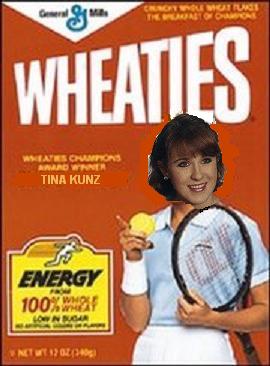 I thought of Bjorn Borg all year, and wondered if he thought of me. Who was that adorable woman who shrugged at me from behind the ball boy? She's so understanding. She relaxes me. She'd make a wonderful wife. I don't care what anyone says, I love braces on women. She's not THAT small. And what a cute blouse she wore. I am batshit for large leg o'mutton sleeves. If I was given a homework assignment, I wrangled Bjorn Borg into it however I could. I remember giving a presentation about Bjorn Borg in front of my Language Arts class. Later, many people found polite, indirect ways to tell me to please stop talking about Bjorn Borg when they signed my yearbook, as you may have seen in a previous entry.

I had to miss watching parts of Wimbledon on tv that year. Family vacation to Orcas Island. No television. HISSY FIT. NERVOUS BREAKDOWN. THE SOB THAT WAS HEARD 'ROUND THE WORLD. This resulted in a Walkman. I accepted bribes then, and I accept them now.

Boris Becker won that year, I think. And I was like, Boris Becker? Who's THIS Johnny-come-lately? I've loved tennis since LATE LAST YEAR. Feh. Tennis isn't what it used to be. Kids today. I think I'm going to hang it up.

And I hung it up. By August it was as though Bjorn Borg and tennis never existed. I dropped them like a couple of used kleenexes and started dating The Police's album Synchronicity. Bjorn Borg was the Iceman? I was the Iceman. 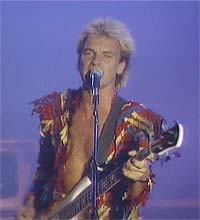 omg. that was some funny stuff. lord you are funny...

This was better than I could have possibly hoped for. Thank you.

I was doing okay right up until I hit the Wheaties box, at which point I completely lost it.

In other news, Jesus Christ, can Blogger be more irritating? Eat a can of dicks, CAPTCHA.

Hah! Okay, not to date myself (but, who else Will? Ba-DUMP!), Synchronicity was the album we played incessantly during Summer Stock '82 in the light booth when we were hanging lighting instruments & rigging sets - probably listened to that album 5 gazillion times that summer.

I remember that era of tennis! I hated McEnroe, and Connors and Borg were the shit. I had a crush on Chris Evert...jesus, I was a dork.

my mum and I had HUGE crushes on tennis players ---- Bjorn Borg and Stefan Edberg most notably --- something about thoses Swedes I tell you!

Edberg, baby. Edberg and that righteous kick w/the second serve. THAT was where the early 80s tennis gorgeousness was at.

I used to watch every single second of Wimbledon every year.

I am a horrible tennis player.

Years later, I'm finally realizing how exciting it is that Lindsay Lohan*, "lingeries", "cruise" and - best of all - "cat" all think this is the best site. That spam is adorable. It's as though, well, a cat were responsible.

I'm going to start leaving two-word comments on blogs as though I were a cat. It really brings a lot of joy. Eventually.