Look down at the boy in the middle looking down. 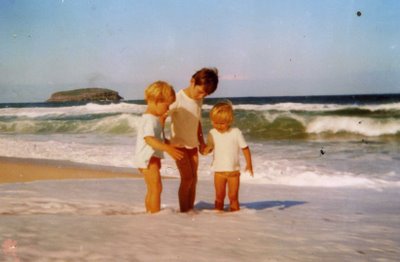 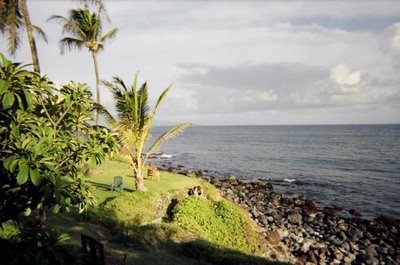 That up there is where we met, on the north shore of Maui. That's us in the picture in the same spot where we fell in love, two years later on our honeymoon.

We met on a yoga retreat that a mutual friend had organized - or really, that a mutual friend threw. Eleven of us were flown to Hawaii from various parts of the world, and treated to 10 days of oki-do yoga, fresh organic food cooked for us thrice daily, and for two of us, the loves of our lives.

Oh, man, lame! Lame! I mean, how do you thank someone for that? There's no way to ever do it properly. I will forever feel hobbled and backwards and inadequate in the thanking-her department.

The first five days were our Festival of Shyness. We each had instant flutters for each other, but neither of us were very forward*. However, the more Dave talked, the more the goner I. He seemed to me like a composite Beatle of some parallel universe, charming and foxy and sweet.

*I'm the worst flirt ever - not worst as in incorrigible, worst as in my best move was handing him his napkin directly as I was setting a table, instead of putting it down on his plate like I'd done with everybody else's napkins. Oh, lay it on with a trowel, Miss Loose Morals. Anything could happen.

On the fifth day, we went on a snorkeling trip to Molokini. In the van on the way back, our knees touched and we didn't move them. Smoke! Spark! Zap! Zzzt! Later that afternoon, Dave and I were hanging around reading poetry books and our friend Emma came up to us - THOUGH WE HAD DECLARED NOTHING YET TO EACH OTHER, NOTHING HAD BEEN BROACHED - and said to us:

I just want you to know that I'm so happy for you. You're both such good people, and you deserve love.

While I died and fell through the floorboards and was buried alive** of embarrassment, she apparently said something else, like, the rest of us are all leaving so why don't you two just do whatever you have to do. And then she left.

**Yes. I had died and was also buried alive.

I resurfaced from my grave and said something strangulated like, oh, Emma, but Dave had his shit supremely together and took my hand and made us happen.

I can't even tell you about our first kiss because it was too private even for Dave and myself to witness, I think. It was like some light came and hid the kiss from us. I can only get a vague handle on it. It was like this moment wasn't for our personalities. It was for something older or finer. And then we walked down to the chair that you can barely see in the picture above, and it felt like we were walking down some invisible aisle. Not some aisle. The aisle. You know what I'm saying.

The phrase "walking on air" - you know, that's a real thing. That actually comes from something! I had it with Dave, there in Hawaii. I could really not feel the ground underneath my feet, or I could, but barely, like my feet were so far below my brain that the message that ground was hitting them had too far to travel. I was like, oh, man! I can't feel the....hey, wait! That's...this is like that phrase! Huh! I thought that phrase was randomly generated! But this is what it's from!

And then came Dave in Australia and me in Seattle and the most horrible phone bill of all time. If you fall in love, don't have an AT&T phone plan, is all I'm saying. And then two months later I was in Australia, and then later we got married and now we have Finn and that's it. We're set. When Dave proposed to me in Sydney, we talked afterwards about how we were going to march cheerfully into a store, smack our hands on the counter and declare, "Two coffins, please!" 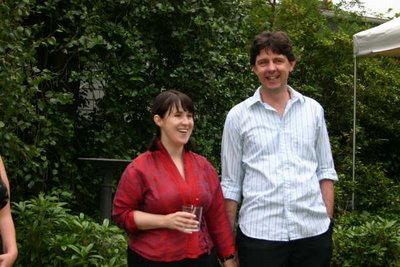 I mean it. Two coffins, please. But hold the hell off until I've done at least sixty more of these birthday posts. Thanks, universe. 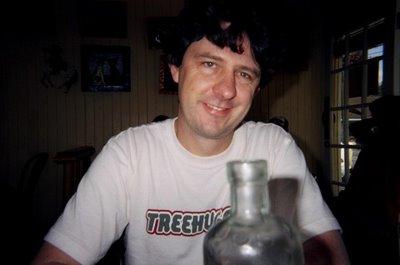 Oh sure. Way to drive a romantic bodkin into my shiny adamantine armor of cynicism!

And now that you mention it, Dave does sort of look like a Beatles picture mash-up.

Whatever. That's such bullshit. Walking on air? I mean, c'mon, it wasn't that glamorous, was it? Tell me you nearly shit your pants, like I did when I met my hubby.

Seriously though: Cheers and congrats.

wow. what a beautiful post. i've heard the story before but i teared up at this version just the same. HB dave, you guys are both so awesome. oh and so is finn!

marvelously great smile inducing entry, you loves you. Congratulations to you both, and happy happy, Mr. Hatrabbit.