Happy New Year! That's what I'm doing here. Writing is the car and I am the driver. I might also be a person behind the car pushing it if we end up somewhere flat and the car hasn't started yet.

If the engine were running, I would have some sort of direction to take us. This is not a trip to make the car go somewhere in particular. I'm just trying to keep the car alive in case I need to drive it. A person cannot talk and think endlessly about being a writer if she doesn't actually write something ever. It begins to get sort of sad, and being a writer sounds more and more like being a professional skydiver or astronaut or ballerina.

Oh my god. I forgot that nobody likes to read about a writer not writing! Especially when that amounts to approximately a fifth of that writer's output! I'm going to try the ignition now.

I have just opened another tab. 101 Great Posting Ideas.

Oh, Jesus. The first suggestion involves "matching up my readers wants and needs using the Visitor Grid method of brainstorming." I thought this would be like, "Write about the best muffin you ever ate!" The thing is, I don't know your wants and needs, other than those of the person who perpetually arrives here after having googled "milk boobs", and I don't want to get in a grid with that person so much.

*Then they suggest I write a post exploring the pros and cons of an issue. I could, because they told me to, but I don't want to, so I won't. There, I did.

(To get that accent over that 'e', I googled André Breton and then copied and pasted. Is there another way? Do French people google André Breton when they need an accent aigu?)

*I'm told I can also spruce up my post with pictures. That's a good idea. I google-imaged good writing. This is something that came up under that rubric. (I also googled "rubric" to double-check. I think I'm all right.) 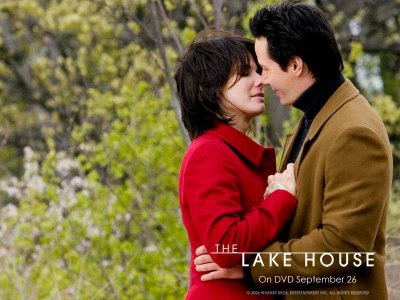 Really? The Lake House. Well. I congratulate the writers on this victory. And I'm not in a position to be snarky, as these writers have written something.

There are a lot of things, of course, that I could be writing about that are actually things. In less than three weeks we're going to have the ultrasound that tells us who this baby is, if this baby cooperates. I could write about how I feel about the two possibilities, an Oona or a Fred - how I'm going to be kind of intimidated if it's Oona, because I've built the idea of a daughter up in my mind so extensively, and how sort of relaxing Fred sounds in contrast, and how shocked I'll be if it's not Oona anyway. I could write about how this particular pregnancy and the overwhelming physical and emotional toll it's taken during its first trimester has left me feeling completely disconnected from everything except my body, and how I miss other things: meditation/the associated feeling of inclusion into the big stream of life, writing/art/creativity, and very very much my friends. It's like I was throwing up not just the things I ate, but many of the things I care about most. I could write about my sudden adoration of beef. Beef and milk chocolate. I could write about Dave, and how great he's been, and how exciting it is to be in love with my husband in a way I didn't imagine that a person could be after a while. My great good fortune. And I could always write about Finn, but trying to describe that utterly bananas, gorgeous, wackadoo creature is far too humbling for someone as rusty as I am. Just imagine a naked, milky-skinned elf dancing around the kitchen holding hands with his parents and then spinning off and bumping dizzily into the cabinets. That'll have to do for now.

Au contraire, ma poupee, we most certainly DO want to read writing about not writing. It makes us feel better about our own not writing, yea, comforts us that we are not alone in our not writingness.

Re: Special characters. this is the number one hit you get when you type in "html special characters" into the google. It's a good list if you need a wacky accent mark or something.

Re: Professional skydiving astronaut ballerinas. These people are such jerks! Hogging up all the glory.

I wonder how André Breton's parents got that thing. Actually, they probably just did a little tick above the e with a pencil. Sometimes computers don't really make things easier, do they?

I just figured this out! E accent aigu is done by holding down "option" while pressing "e" and then pressing "e" again to complete. I always Googled "touché" and then copy/pasted. I feel like a mighty swan of efficiency now. That is exactly how I feel.