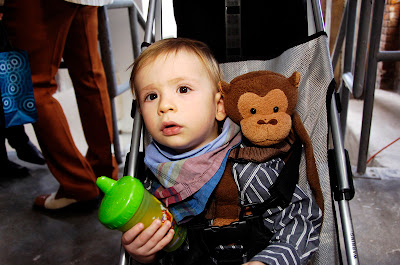 That's Finn up there, in Brooklyn for Heidi and Kip's wedding*. On his back is the monkey named Brooklyn, who saved his life when he fell out of his booster seat while we were having dim sum. Brooklyn totally broke his fall.

*Which was TOTALLY FREAKING PERFECT.

Finn says everything now. He says, "I need this." He says, "Crackerman" as he is requesting some Pepperidge Farm goldfish crackers. (Did you know that their...lead cracker...is named Finn? He is. Finn the Fish. Finn comes up to me and he demands crackers, Finn the fish, Finn the fish.)

He remembers everyone he meets and talks about everyone. He talked to my friend Kristen a month ago on the phone, and he was saying the word "kiwi" to her, and now he's like Kristen. Retetone. (Telephone) Kiwi. Like they had this great and memorable talk about kiwis.

Heidi's mom, Sherry, gave Finn a beautiful blue raincoat with a dolphin on it. He wears it all the time, inside the house and out. Today he wore it without pants like a little flasher. He says, "Wear it! Wear it!" And then he says, "Sherry. Raincoat. Dolphin."

We have this weird stuffed toy that they gave him at Nordstrom when he got his first pair of shoes, called Nordy. It's white and has a sort of horse-ish shaped head, but no ears, and a body but no arms or legs. I've given him this weird personality, alternately very skittish and very bold. He scoots around to hide from your view, then comes up suddenly to push his face into you, making weird noises all the while.

I was making Nordy do his thing for Finn the other day and Finn laughed and said affectionately, "Nordy. Crazy."

And when we got back from the airport late at night on the Shuttle Express, Dave said, "We made it." And then Finn said it, too. "We made it." In his tiny, husky voice.

He is lucky that I have not eaten him.

And Finn isn't kidding. We made it is right. No small feat. Traveling with a toddler...whoosh. Pass the wine. Even with the best boy alive.
Posted by Tina Rowley at 12:22 AM

OMG - he is toooooo cute! That's funny how he just summarizes everything in 2 or 3 words. Very effective!

That monkey is awesome! Monkeys are the best! Every kid should have a least 1 monkey!

That is unbelievable! Crazy! Finn is one smart little sweet potato! There is a serious love affair going on between your family and words, and I LIKE it.