smorgasbord with really only one (totally adorable) thing in it 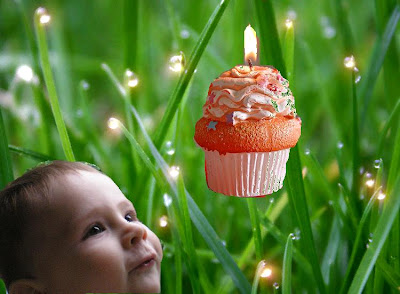 He's still a baby. You still count him in months for a few more days. Until Friday. Finnington J. Picklesby III. The J is for Jupiter.

He is working like a dog on talking. Animals are the main thing he likes to talk about. Kanga. Kooka. Kadalaalala (Koala). Giraffe = ArA. But he'd mostly like you to know that it's kangaroos on his mind. You think he's almost asleep and suddenly he shouts, KANGA! His quote about this morning's breakfast: "Yummy." He's got this red pair of shoes that Bladio Blogio got him, and he's crazy about them. He stares at them and tries to say "shoe". Doo. DOO. Dzhoo. And once, shoe. When I give him bananas, he tries to say mama and banana at the same time. Mamba! Either that or he wants me to do the mambo or the samba and he's mildly confused.

We were getting him ready for bed tonight and he was in his little white velour suit with the feet on it and the little dachsund on the front and he was kicking his feet and laughing and being a wackjob, and it was like a punch in the stomach, thinking of today's (now yesterday's) events. Everyone was someone's erstwhile feet-kicking bunny. It was a horrible time to grasp a corner of it, right before I was supposed to lie down with Finn and soothe him to sleep. It feels wrong to talk about it here and it feels wrong not to. I will leave it at that.

Finn, back to Finn. He likes roasted red pepper hummus, proving that his palate is more adventurous than my own. He's a party dip guy. Hummus, guacamole. No need to refill the chip bowl on Finn's account. He's good to go.

I'm sorry I haven't posted lately. I'm writing my solo show at the moment, and so when I have the urge to write, I am behooved to put my efforts there. It's going well. I keep describing the process like this: it's like my head is a box with a door in the front, and the box is tipped forward, so whenever I open the door to write, material falls out. Boonk. It's not fighting me at all. I'm surprised and very happy. I feel like it's going to be my little Kilroy Was Here, like a big part of me can relax after I do this.

More Finn. He's got this new expression that's like, You are crazy...and I think I like it. He has giant feet. In heavy rotation on his bookshelf at the moment: What Floats? and I Am a Bunny and Found You, Little Wombat! and Sometimes I Like to Curl Up in a Ball.

Coming this weekend for the first time, it's

Good luck, my boy. If you've inherited anything from me, you won't need any. You will float like a butterfly, sting like a bee.

Also, if for any reason this post doesn't have a thing for comments, IT IS TOTALLY A FLUKE. I have never met a comment I didn't like. Almost never. I don't know why Blogger's went all no-comment on me. I didn't ask it to. Is it trying to teach me something? Is there a life lesson in here? I don't want it, Blogger. You're not my real dad.

TINAAAAAA!!!!!! I'm so glad you're back, and well, and have been busy writing your SHOW, and being gloriously entertained by FINN, instead of busy being trapped under something heavy, or cleaning grout, or being audited. I was worried.

The big birthday- WOW. We are about a week behind you, also in befuddled awe. My girls would like to suggest to Finn that he set some time aside to consider, in addition to the kangaroo, our living room blinds, and our dog. Point at them. Say "GAK!!!" a few times. See if you like it. We do.

I'm very excited to hear more about your show, and am happy that your creative juices are flowing!

Happy birthday Finn! Happy one year of mamahood, Tina! Great to hear what you guys are up to. He sounds like a doll, with all that chitter chatter. Enjoy the cake!