Ain't that a kick in the head....that's a phrase, right? For something unexpected and good, something kind of jaunty or whatnot?

Me, I don't like to be kicked in the head. But proverbially, it's pretty good! And a kick in the head is, my friends the League of Concerned Citizens about Literature had a thing where they wanted submissions for this public health project. Poems about toothbrushing or safe sex or handwashing and stuff like that.

So a long time ago I sent them a thing I wrote about handwashing. And I just now heard that it will be published on some kind of placards somewhere and put somewhere for people to see while they wash their hands!

Maybe everybody who sent something in gets to be on something somewhere. OR MAYBE MY POEM IS AWESOME. Or maybe the pickings were skinny.

This is my poem:

I Sing of Soaps and the Hand

This isn't a poem, it's a fact. I sing of soaps and the hand. I will tell you about the greatest handwashing of my life. It was at Mrs. Newoman's office, in her house which she shared with her small grandson.
The soap: Jason's Lavender. The handtowel: old, small and violet. On the sink: a little blank mother goddess and child doll. By the sink: a little red stepstool for the boy I never saw. In the tub: boats. On the window: hanging necklaces. Through the window: leaves. What it was like: who says I cannot wash my hands twice? What it was like: does it matter that I am too tall for this stepstool? What it was like: I will stand on the stepstool, stoop and soap. I bought a little mother goddess, I bought Jason's Lavender soap. I installed them in my bathroom.

But you know and I know that it was not the same.

But far more awesome is this scrap of a John Berryman poem. Never read him until tonight. This bit is from The Dream Songs. It's my new something. My new anthem or something! It also would be my new email signature if it fit. But it's too long. But I might tack it on to some emails anyway. I would like to be associated with it. Dave showed these poems to me, and then had me listen to a recording of John Berryman reading one of his poems. I would link you to it but I don't know where we were and Dave is asleep now. But I bet you can make that happen if you really want it to. AND YOU REALLY WANT IT TO.

I don't operate often. When I do,
persons take note.
Nurses look amazed. They pale.
The patient is brought back to life, or so.

And now, because I imagine that you enjoy good things as much as I do,

LOOK AT FINN, who is apparently a poem about toothbrushing: 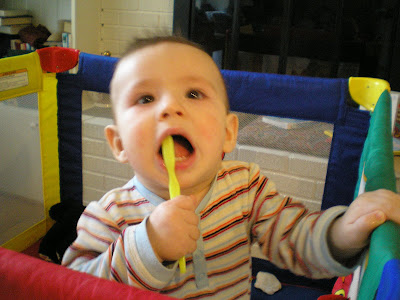