buried in sand is the natural habitat of my head

If ostriches weren't gigantic freaky phobia-rattling birds we would be likethis. I would call up the ostrich and be like, what are you doing right now? And the ostrich would be like, I'm hiding. And I'd be like, me too. We should hang out. We should start a club. It has to be at my place, though, because I can't come to your place because my head has to stay here. 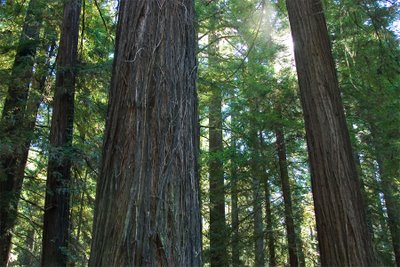 I just finished reading Laurie David's book Stop Global Warming: The Solution is You. I don't know how I got my head out of the sand long enough to read it but I'm glad I did. It's wee, a wee tiny read, but it's incredibly vivid and engaging and galvanizing.

I'm not an activist. I deeply admire activists, but I don't have that drive. I wish I did. It's beautiful, that kind of heart and fire. But Laurie David, holy shit. She deserves to sleep well at night. She started getting concerned about global warming soon after she became a mom, and then when Kerry lost in 2004 she cried for three days and three nights and then woke up hell bent on doing something about it.

Torpor is more my thing. Fear, torpor, paralysis. I think of myself as easily overwhelmed, easily defeated. Defeated before I begin. So, global warming is exactly the sort of thing I am built to run away from. See you later, motherfucker. The Golden Globes are on. I gotta parse some outfits. I need to go crack open Us Weekly and see if I agree about Who Wore it Best: Angie Harmon or Jamie Lynn Sigler. Only 44% say Jamie Lynn Sigler? That's madness! Are those daffodils blooming out there? January, huh? La la la. Mmmmph. Stars are just like us, they scarf their lunches. Now I know.

Laurie David's inner flame must be something else indeed if it managed to sneak a spark down under my flab of inertia, down through the sandy grave that houses my head. I'm not doing much now, but I'm doing more. I'm turning off the light when I leave the room. I'm turning off my computer when I'm not using it. I'm thinking about it. It's part of my thinking now. I hope I turn it up a little, get a little busier. I hope I can continue believing that my teeny weeny actions make a difference. I hope I don't get discouraged and start saying, ah, screw it.

I mean, look at this guy. Look at my son. 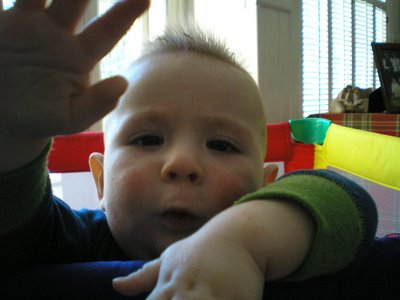 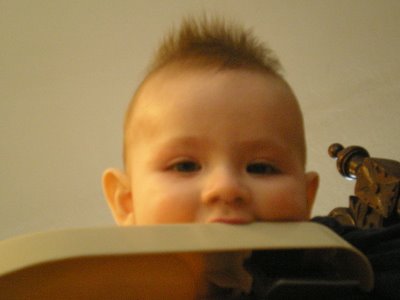 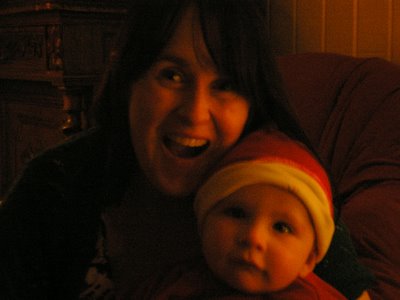 Why would I want to contribute to the screwing over of his future? And look at these guys, now. 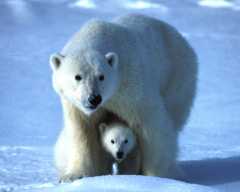 That mama surely adores that small bear with as much passion as I adore mine. I want to be someone for whom that fact is vivid and important. I don't want to fall asleep about it.

If you're scoffing at all, eye-rolling, like, here she comes with the polar bears and the pictures of her son, I am of two minds with you. One of the minds gets it. One of the minds recognizes the potential...what is it...corniness? saccharine quality?...overuse of that kind of heart-tuggy image, the possible deadness of that. The other mind wants to yell, NO, THINK ABOUT IT! Think about someone you love! Imagine them in jeopardy! Get uncool for a second! Don't make the image come meet you, you come and meet it.

And then I think that this is exactly the sort of internal debate that hamstrings me from being an activist. I don't want to do it wrong and contribute to someone shutting off. So, yeah. This is going to be awkward. Ah, well. Damn. C'est la vie.

Edit: The Trivial Psychic strikes again! I did this post last night, and then found an email from Laurie David in my inbox this morning. The subject heading was "Call to Save the Polar Bears". All right, it's not that amazing. But it's a tiny bit amazing. Mildly notable. I have these trivial psychic moments sometimes. Like once I dreamt about a woman in a purple suit who was thin in the beginning of the dream and then fat at the end of it. The next day I was watching the Tracey Ullman show and she did a sketch wherein she played Elaine of the restaurant Elaine's in NYC. She was skinny in a purple suit at the beginning of the sketch and fat in a purple suit at the end. I AMAZE YOU.

Can a guy and a girl be "blood brothers"? How about "blood siblings"? Thanks for the comment!

U.S. Interior Secretary Dirk Kempthorne proposed on December 27 that polar bears be listed as a "threatened" species, not because their populations are currently in decline but because global warming may threaten them in the future.

Kempthorne's proposal came in response to a lawsuit filed by environmental groups against the U.S. Fish and Wildlife Service. A final decision on the listing will be made in December 2007, after a 12-month period of public comment and scientific review.

"Polar bears are one of nature's ultimate survivors, able to live and thrive in one of the world's harshest environments," Kempthorne said. "But we are concerned the polar bear's habitat may literally be melting." He cited thinning sea ice caused by global warming as the main threat to the bears.

Ok, so it global warming "may threaten them". It also may be true that globabl warming isn't threatening them much at all. Much less is not known about "Global warming" than is actually knwon. Most of the facts you hear about global warming are educated guesses at best.

I think everyone can contribute to making the earth cleaner without having to go into panic mode about it.

Tina, I wrote some letters to our reps asking what they're doing about this insanity. Iraq and Darfur are nightmares, but they're nothing compared to what we're facing with global warming. My resolution this year was to stop feeling helpless and actually join some sort of hands-on environmental group, but I haven't yet. I remain stuck with this helpless feeling in my gut. It's scary business. I can't even think about seeing "An Inconvinent Truth"...it gives me nightmares just thinking about it. Ugh. And ugh. And polar bears are really dying, right?

Easycure: Au contraire, my friend. There actually isn't any credible dispute on the subject of global warming and its causes. Anybody who says otherwise is likely talking out of their wallet. You might check out "An Inconvenient Truth" - it's illuminating. But I agree that panic mode isn't the the most productive. Urgency, however, is a horse of a different color.

Pete: I want to talk to you more about your resolution. I want to do something more, myself - whether join an existing group or start something myself. I have a vague idea about reaching out to people who, like myself, don't really fit the activist profile. I don't know exactly what I'm thinking of yet. (Yeah, the polar bears are drowning.) And don't be afraid to watch the Al Gore movie. It's rough, yes, but it ends on a hopeful note. Hopeful-ish.

Also, Easycure, check out this link.

Washington Wakes Up to Global Warming

Oh my god. I just re-read my comment to you, Pete. How many times can I use the word "myself"?! Polar bears like myself are drowning.

and more importantly, your psychicness bodes good things about my hair.

no. not more importantly. i read this interview with blythe danner--it might even have been in american theatre--that wasn't too compelling, but at one point she talks about global warming and just yells out, for god's sake, turn the lights off!

and now i turn the light off when i leave the room, and find it unbelieveable that i did not do this before (much less that it appears to be the sum total of all my action items on this global warming nightmare), and that blythe danner is my conscience.

This is not nearly as politico-saavy as these other comments, but the thing I have to say to you is don't worry about getting your thinking perfect before you take action. Take the action and let it begin to have an influence on your thinking. It can and does work both ways. xoxo