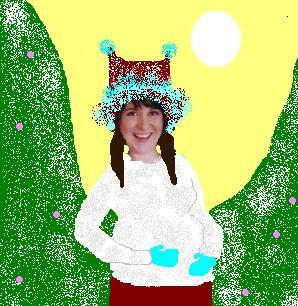 How I love to change the colors in the template! Oh! Jesus! The pleasure it brings me!

I have very little to offer you today. But: 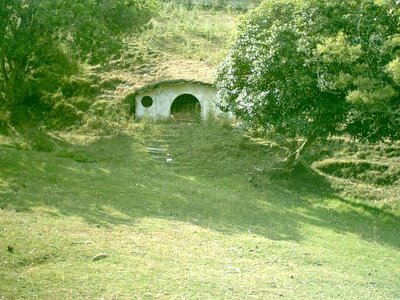 Up there is a little hobbit house from the Lord of the Rings set.

I will tell you why. Dave and I are going to sell our beloved Pink House this year, because we are having a new house built for ourselves. My mom lives up in North Seattle, and the lower half of her lot is an unused orchard. (Well, no, it's a used orchard. Plums grow, get eaten. Apples live on it. Raspberries are there.) But now the orchard is going to be used for us living in it! We have a builder, and a great architect, and we are underway designing the joint.

We had our first meeting with the architect yesterday, and we got to tell him everything we wanted for the house: the specifics, the vibe of the place, the sort of architectural principles we wanted highlighted in the design. And the more we told him, the more of a glint he got in his eye! We love him, we love him. He asked us if we wanted some little space that could be used for casual performances, since he knew that so many of our friends are performers. What?! Thanks for asking! Yes, we would!

And best of all, as I was struggling along trying to articulate the sort of feeling we wanted in the place - not particularly traditional and not that cold icy modern angular feeling either, just something warm and rounded and harmonious with nature - he busted out with, "...Are you looking for something kind of like Bilbo Baggins' house?"

YES! YES! WE'RE LOOKING FOR SOMETHING LIKE BILBO BAGGINS' HOUSE!

Sputter, sputter, point to the nose, on the nose, bingo, that's it.

Oh, architect. Architect. We love you.

Our builder (who's a dear old friend of the family) told us later that Guy (our architect) said that we had described a house he'd want to live in. So we know he's going to be working with his heart in it. We're so happy. Before the end of the year, we will be ensconced in our Bilbo Baggins house. With our boy.

We decided that if we have another child, and it's a boy, we're naming him Frodo. Frodo Rowley.
Posted by Tina Rowley at 11:28 AM

Your picture and this post just makes me smile- I'm so happy for you guys and your charming, cozy new nest you are building! It sounds wonderful! Fruit trees! Babies! Hobbits! Excellent!
Happy New year, you lovely Rowleys.
xo

yeowzers! crazy! of course we will miss the pink house but it seems inappropriate to live there now that you are turning into hobbits. there was this house (still is i think) in victoria, BC that this couple built. It was modeled after the seve dwarfs house. they lived in it and it was really cool but finally too many people would drive by to look and they moved out and turned it into a museum. i went there with my sister and mom and dad when i was like 8 or 9. i remember that it was the coolest thing i had ever seen. they had little dwarves everywhere and a stream and stuff. i wanted to live there so badly...

Thanks for your excitement, sweetos!

I feel that I should point out that it's not going to be like a replica of a hobbit house. It's not going to be, like, an underground cave with a round door. The outside is going to look like a regular house. We're talking more about the vibe of the interior - lots of curves and little nooks and things. Cozy.

OH MY GOSH!!! are you kidding me? well of course i know you aren't but COME ON! what is more perfect than the Rowley's living in a hobbit vibing home??
Welcome home Finn and family.
Love you all!!!
xoxoxo

that is really exciting!!! cool!

Congrats! The cats and I have been trying to get our place to look more like Mordor but Lorraine won't let us. Actually the cats don't care.