the smartest, weirdest newborn in the world

I had a dream about Finn last night. I dreamed that he was born and ready to be picked up at the hospital. (Apparently I didn't have to be there for the giving birth part.) I hurried to the hospital, and found a nurse tending to a tiny little baby that looked a lot like this: 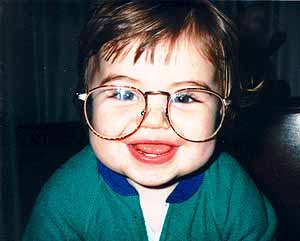 Except newborn-sized and just wearing a diaper. And his glasses looked more like this:

And also, one of his internal organs was hanging outside his body with a note attached to it telling us not to worry, that it would eventually make its way back inside.

But the thing about this baby was that he was brilliantly precocious!

* I took it to mean that he was dialed in with our future babies, so he didn't blow his credibility.

I grabbed his little carrier and made off home with him, and we were grinning at each other the whole way. Later, I attempted breastfeeding him, and a doctor from TV came into the room and confirmed that it was going well.

I'm just realizing that this isn't the first time I've dreamed about a precocious newborn who can speak. I had a dream once that Pete and Carolyn had a baby, and it had a huge head like a tennis ball and a teeny tiny body, and it could carry on conversations. Hmm.
Posted by Tina Rowley at 10:35 AM

I've had similar dreams. That I have a baby and it talks. Also the baby I have in my dream is very odd looking and even (dare i say it) sort of ugly but in a cute way. hmmmm.

That is a great dream! Most of mine have been scary so far.

Is Finn his official name? I think I missed that. I love that name, but my hubby has rejected it.

Yep, Finn it is. And my mom ordered a Christmas stocking with his name embroidered on it, so there's no going back. Have you picked a name for the smore yet?

Also, Laura's subconscious: Quit with the scary dreams. Give her a treat.

This whole post for some unknown reason had me giggling until I started to cry.

Oh my! Our baby must've been reeaaly tiny if a head the size of a tennis ball looked huge on it...

What's your take been on talking out loud/reading/playing music for Finn?

Happy New Year, by the way!

Your baby was ultra tiny! Like, I'd say from head to toe, maybe 8 or 9 inches. A lot of which, you know, was that head. But what a head! That baby was a genius.

We talk to ol' Finn all the time, and now and then I suppose I read to him, and once in a blue moon we play music especially for him. And I guess I sing to him sort of frequently.

It's fun figuring out songs that would be good to sing to a baby. And lyrically, you're not going to get called out on anything for several years, so there's a lot of room to maneuver.