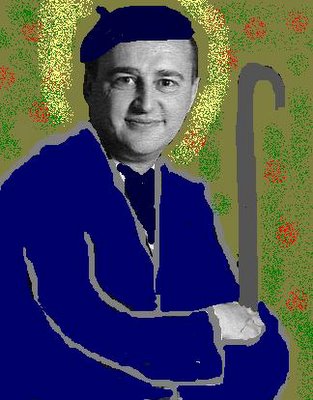 Christmas Eve one year ago was the last time I saw my dad.

Dave and I went to my folks' place for Christmas Eve. We gave my dad some Ugg slippers, which were too small for his swollen feet, but he wrenched himself into them anyway and grinned.

We'd been estranged for a few months. (Nothing I will ever talk about on the blog.) After Christmas we went back to a situation of estrangement, though we spoke on the phone in January after Dave and I had a tiny courthouse wedding to get his immigration ball rolling. His last words to me, about our wedding, and repeated joyfully over and over again: "You've been spliced!" Two weeks later he died suddenly of a heart attack? a stroke? something that happened too fast for us to make it the fifteen minutes up to my parents' house to say goodbye.

I've just recently finished reading Joan Didion's book, The Year of Magical Thinking. (It's excellent. Read it.) (Oddly, I love memoirs about great mourning. They feel like...like I imagine childbirth class is going to feel, but in reverse, and about the other giant inevitability. If you're brave, read The Disappearance, by Genevieve Jurgenson. She's a Parisian woman who lost two little daughters in a car crash. The book is written in the form of letters to a friend, and it's very spare and...elegant, if it's allright to use that word in the face of the subject matter, and naturally it's a series of repeated blows to the gut, but somehow in a good way. Books about death - they're like throwing open the closet door because you think there's a monster in there, and there is, but it feels good to look it in the face before it attacks you and those you love, as it will.)

So, when I was reading Joan Didion's book, I was flooded with all these images of what has left the Earth with my father.

Here are some of them:

* The real story of what happened in India when he was there on his Fulbright, and he had been saving some apples on the window ledge in his room, but a monkey reached in and stole them as he watched. I mean, that's the story, but all I have now is this bare sketch, this plain muslin of the thing. The details, the embroidery - they're cremated. Same with the details on all his stories - the one about when he hitched a ride with a navy pilot sometime after WWII, and the pilot was speeding and got pulled over and the cop said, "Okay, buddy, show me your pilot's license," and the guy pulled out his actual pilot's license and the cop was so nonplussed and amused that he let him off with a warning. Look, allright, I've pretty much got the details of that story. But there are so many more stories that I've forgotten, or have only the fragment of an image from them, and now that he's gone I don't even have a way of calculating how many have been lost.

(From generation to generation it's a giant game of telephone, and everything gets bastardized or totally abandoned and disappears.)

* My dad walking around in his OUTFITS. Mercy. He cobbled together some doozies. I've amalgamated them in my mind into one heroically mismatched look that stands for all of them: a navy beret, navy polo and a navy blazer worn over a white patterned flannel lunghi, which is kind of like a big tubelike sarong. Underneath, black socks and black sandals.

* Many of my ancestors could have been colorfully fleshed out for me by my father. Now they're just names and faces in old photos that I can't match together, the odd questionable fact floating by.

* Likewise with the artifacts in my parents' house. Little clay horses and various Buddhas and Shivas and little tablets with hieroglyphics on them. You know as much about them now as I do. But they came from somewhere with a story attached to them, always a story against the backdrop of some exotic land. I don't know their worth now - not their monetary worth, but their specialness, I can't gauge it.

My dad's favorite Christmas carol was Good King Wenceslas. Is this true? We'll never know! But I think it was. Something tells me it was. Dave and I were on a little trip to Port Townsend with some friends recently, and while everyone else was on a walk after dinner, I was back at the house listening to a Christmas album by The Roches. Good King Wenceslas came on, and I lost it.

Dad loved Good King Wenceslas, and he loved King Lear (did he?) and he loved Pere Goriot, a book by Balzac that he always wanted me to read and I never did and now I'm scared to do it.

Dad loved Paul Robeson. He'd seen him in Othello back in the day, and loved the man.

Dad was a mushroom hunter.

Dad read science fiction books like other people pop Altoids. They line the walls in my parents' basement, all catalogued.

Dad was known to get offended if you wore a seatbelt in his car. A racecar driver taught him to drive, you see. Yes, I know.

Some ways he might acknowledge you: a small bow, or if he was sitting reading a book, he'd make a cluck-cluck sound with his tongue and the roof of his mouth.

Towards the end of his life, my mom would ask my dad how he was, and he'd say, "I'm here" implying that he was only just.

Dad loved this record of instrumental German Christmas carols, which sound like they're played on a Glockenspiel.

When my dad died, our estrangement died, too. Now I think we're very close. I had a dream a few days ago where I was looking at the Cascade Mountains, and they looked more astoundingly beautiful than ever, and there was this big new mountain amongst them, and the whole range was lit up pinkly in the dawn, and I had this pair of something like 3D glasses that you could look through and the mountains would look even better than they looked to the naked eye. Then my dad was there, sitting outside silently on a chair, smiling. I told him about these glasses, and I was about to run inside and get them for him so he could see the mountains, but then I realized that he could already see them infinitely more clearly than we could, and he didn't need no stinkin' glasses.
Posted by Tina Rowley at 1:52 AM

OK, so maybe your little tune here won't be included on the next Chipmunks Christmas album, but it was serene and true and beautiful.

Thanks for sharing a little of your dad with us- it's cool to see where some of your unique charm and delightfulness stemmed from.

This is a beautiful tribute. Thank you for sharing.

Oh miss Tina...
I didn't know....
I lost my mom in March . Also rapidly. And we were also somewhat estranged.
Your post rings close to home...
Thank you for sharing about these books.
And about your dad.
Merry Xmas !

Hi Sweet Tina--For me it is the rope trick that Buster Keaton taught my Dad when he was a kid doing summer stock....I remember my Dad sitting on my sister's steps one xmas eve showing the trick off, and I, in the middle of some father leveled angst, sat there torn between wanting to learn it, absorb it and feeling angry at him, not wanting to give him the satisfaction of knowing that I was paying attention. And now it's gone. The trick. But I can still see my Dad on that step, grinning like the child he must have been when Buster Keaton taught him the trick...And, like you said about your dad, now I simply love him.

Your Dad seemed to be enormously entertained by my name --he thought my parents had created it as a clever, literary joke and told me that once I read Vanity Fair I would understand. I still haven't done it, but it's on my list (please don't tell me the joke yet). I always had a great fondness for your Dad. And your Mom, too. Please tell her so. And tell him too, next time you see him.

what a great dream. how lovely that he visits you. thank you for sharing! it's good.

This is sad and beautiful.

i've been dancing around that didion book. i'm embarrassed to admit i spend a significant amount of time fearing and pondering my parents and that Other Great Inevitability, and when i first heard about the book and wanted to read it, i thought i might be a glutton for punishment.

but i don't think that's it. like you say, it's about opening the closet door.

someone's making a monologue out of that book, for performance on broadway. i'll read it first, but if the actress is a keeper i think i'll make plans to see it. and bring lots of tissues.

beautiful ms. Tina. thank you - many more in the new year. xoxo

The way I'll always remember your dad is him greeting us at the door (in an Outfit) and giving first me, then you, a little bow saying, "Kris. Tina.". Cuz, see, we're both Kristina, but I go by Kris and you go by Tina. Hee! He never stopped thinking that was funny, and now neither do I.