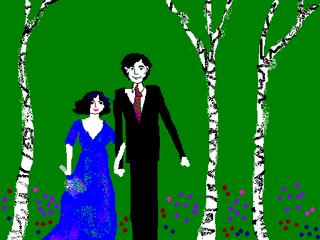 We're still waiting for our wedding pictures, so I drew my own with MS Paint.
Note the plaid tie, the iridescence* on the dress. What craftsmanship!
*yes, iridescence. not pollen from the bouquet.
This post will be a medley, a ratatouille of the day's what's what. Grab a ladle and a shallow bowl, my friends. A shallow bowl will be all you need.

*I won second prize in the limerick contest! Now, come on! The hat rabbit and I were driving around this afternoon after I got the good news, and it was all Chicago and Neil Diamond on the car radio - some sweet cheese for my victory lap. I didn't even mind that the victory hazelnut latte the rabbit ordered for me got warped into some frozen victory chai. What the hell! It's all sweet, right?! In the aftermath, I've been giving the limerick contest, well, first of all, a name, but then as the day has worn on, grander and grander names. I'm imagining when I tell my future progeny , "Yes, I remember when I came in second in The Great Limerick Contest of '05...." and, "Back when I won the International Limerick Championship...." and, "Your grandma was the Great Galactic Limerick Vizier of the....".

* Went and saw Wedding Crashers this evening. Damn it. It was mostly very funny, but it had this horrible turd of homophobia smeared on it here and there which means I can't give it my full thumbs up. And it was like a vortex of craziness near the theater, all night. In the women's bathroom, there was a man in a stall humming loudly and tunelessly, providing an aural backdrop for a woman going to town about a spider bite she'd recently received from a brown spider, after which a person has 72 hours to do something about it. And then on the way out from the movie, there was a Belligerent Baby-faced Teenage Skateboarder, who kept smacking his skateboard down right next to people's feet as they walked by. He did it by my foot, and I looked at him and said gently, "Excuse me," and he gave me the nod, like, you're okay. Then a second later a man came up to us rockin' at full speed the worst Canadian accent I'd ever heard, and he said something like

and I was very caught off guard and I gave him a dollar, and then he was like, "CanIhavesomemore?" and I said, "Um...no...we're trying to budget." In retrospect, this made me laugh. It's like we have a very strict dollar-a-week budget for crazy tweaking fake Canadians.

*A good thing is that, where yesterday we only had the sketchiest internet connection in our house, today we're rolling in it with our brand-new wi-fi! I can practically access the web on my pillow with my head. It's everywhere!
Posted by Tina Rowley at 12:32 AM

I love that picture. That's your thank you card or Christmas card or some kind of card, right there.

who knew that imitating Canadians, even badly, could garner a buck

Well, the sad thing is, with me, almost anything can garner a buck.


Do you want a dollar?