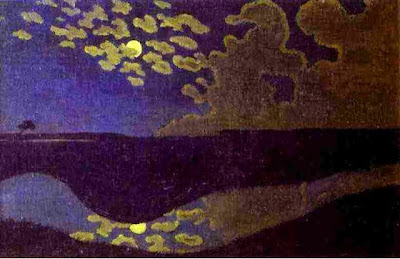 I'm lying in our bedroom on a clear, full moon night. We have a skylight, so at the right moment the moon appears in the middle with a shock of brightness. I reach for my iPod, slip on my headphones and lie back with Debussy. For the longest time, I didn't care for Clair de Lune, but one day that turned, and now when the moon shines into my room like this, I let Debussy describe it to me. These are my favorite nights, special nights, rare nights. The light travels everywhere. Nothing is hiding. I feel safe in a way that I don't feel most nights, which I recognize each time with surprise.

I tense up a little bit at bedtime, I guess. I stay up late, putting off the moment when I'm going to have to turn off the light, let go of diversions and become vulnerable. It's a carryover from childhood, when I'd lie in bed and beg the powers-that-be not to make me clairvoyant that night. Every night I put it out there as hard as I could, "I don't want to see anything, I don't want to see anything, I don't want to see anything," over and over until I fell asleep. I didn't want to see what Granny saw. My mom likes to tell me that when I was very small, I'd complain about things I saw hovering at the foot of my bed. I don't have any memory of that, but something sure went into this frantic drive to stay unclairvoyant. Anyway, some of that lingers. It feels a teeny bit dangerous to get so quiet at night, to give over, to stop, like that's the cue for unseen forces to creep in and get their game on. Forces from within, forces from without, I don't know. Forces.

Something will come, I fear, and untie some knot* holding my third eye closed, and I'll be overrun with needy spirits trying to get messages to their loved ones. Like if my third eye opens, some red light will automatically start flashing on the astral plane, some rinky-dink "open for business" sign in a bad astral neighborhood, and all the etheric junkies and thugs will crowd my bedside, taunting me and tugging at me, and I'll have no way to make them disappear.

*Whatever I have rigged up there feels way more elaborate than a knot, frankly. If you ever saw the show Get Smart, you'll remember the opening montage where Maxwell Smart walks into headquarters through a series of heavy, mechanized doors that slam shut behind him the second he's through. Bam, wham, whoosh, thud, whomp. I installed about a hundred of these over the course of my childhood, I'd estimate, every "I don't want to see anything" a nut or bolt or square inch of steel right between my eyebrows.

Now, clairvoyance isn't the only game in town for psychic ability to work through. There's clairaudience, where people pick up information aurally, and claircognizance, where people have flashes of pure cognition, and there's what I have, which is clairsentience. I get information in my gut that shows up kinesthetically. If I tune into a situation, I'll pick up degrees of friction/frictionlessness, heaviness/buoyancy, obstruction/fluidity, constriction/expansiveness, static, tranquility, speed, etc. I used to do intuitive readings for a living until I got very, very sick for a few months—my body went on strike, which is another story altogether—and once I was better I didn't want to do them any more. My point here is that the family lineage didn't skip me. I just squelched it and then rerouted it and then let it lay fallow, which is what I'm doing with it now.

The upside of having my third eye open never really presents itself to me. I'm sure it's fascinating, and there are probably perks beyond "I see dead people", which is no perk at all in my book. I fear-imagine that I'll feel like a baby again, taking in a mess of sights and sounds and feelings I have no context for, only this time I'd be motherless, unguided, left to fend for myself. A reverse Helen Keller with no Annie Sullivan.

If I could be guaranteed somehow that the old third eye would sneak open just a bit at a time, if I could wake up at some retreat center staffed with trusty, old-hand seers, and find myself one-fifteenth clairvoyant, and get talked through that all day, and then two-fifteenths clairvoyant the next day—if I could move at a snail's pace, my hand held all the way, then yes. I'd like that. I'd do that. I would sign up.

But I never picture anything that gentle. I fear a sudden burst, or something else, something worse, closer to death. That's what I'm subconsciously braced against at night. It's not quite that I fear I'll die. What I fear is that something will happen that will make my current understanding of the world dissolve, and my identity with it, and then I won't die. I'll experience annihilation, then rearrangement, and then strangeness. Strangeness might be the worst, worse than death. Death feels familiar, cozy, well-populated, compared to what I fear. What I fear is exile. Strangeness, loneliness and exile, in some pure form. I stay vigilant because at any minute I think this could strike. And if it's going to strike, it'll surely strike at night.

But I don't have to worry about any of that tonight. My moon is out. There's a book I loved when I was small; it's out of print now, but it was called When the Sky is Like Lace, and it was about three little sisters in white nightgowns who'd keep an eye on the sky for signs that a special kind of night was about to take place. These were bimulous nights, that was the word, and the sisters would sneak out through the woods to the sea and make spaghetti in a gazebo and dance all night and play poker with rabbits and exchange presents, all under this full, rare moon. I get exactly that excited on nights like this, but I don't move. I lie there, too happy to sleep, feeling so safe. The thing can't strike tonight. The moon is looking out for me. Debussy's piano wafts over me on repeat, and the moon is my mother, my bodyguard, my familiar friend. I gaze at her wide-eyed until she wanders away from view, and then I slip into sleep in the trails of her blessing, the world made briefly so easy.


P.S. The painting up top is "Clair de Lune", by Felix Vallotton, whom I'd never heard of until today. If you want a treat, Google-image his work. You might be all up in the Vallotton already, but I just got here, and I'm fresh with the fever about him. Go look.
Posted by Tina Rowley at 12:17 AM

I was wondering what was up with your gift lately. Now I know. You certainly helped me when I was navigating a hairpin turn in my life or fate or whatever you want to call it.

Keep writing. It helps so much keeping me writing.

Sometimes I wish I had psychic abilities. And sometimes I realize how much of an effect that would have on my life. Thanks for your story.

I grew up with when the sky is like lace, our family loved it so much that mom found copies on eBay and gave them to us when we got our own homes.

Peace and blessings with the slow opening.

Paul: Thank you, travel buddy. You keep me going, too.

Cheryl: It's a double-edged sword, right?

Kathy: Hey! You're the first person I've ever run across who knows the book. That makes me glad. And thank you.

I feel a little strange posting this since I only recently discovered your blog (and am ADORING it, btw), but I have a couple of acquaintances who do a lot of work in helping intutives protect their energy and they might be helpful to you. I similarly shut my psychic energy down when I was younger but have found safe ways to open it back up in recent years and it's been both a relief to no longer squelch those bits and has also gotten fun to play with. Anyhoo - AnnaKunnecke.com & erinpavlina.com are good sources =)