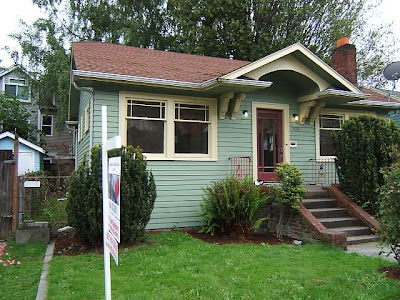 Go back here, if you haven’t caught part nothing and part two.

It’s sold. A guy bought it a couple of months ago for a ridiculously small sum. We would have held out until the market turned around some day, in fifty years or whenever that might have been, but we owed my mom the money and she needed it now, while she’s still alive. So that’s it. Done. Gone. Closed. Sayonara. And the bottom dropped out of the market mere moments after the deal was done, so we feel like we got…lucky? We got something, anyway. A little cash that looked nice in our bank account for a minute until we funneled it over to Aino*.

*My mom. I never know who’s new here. Right, and why would I? I think it’s optimistic of me to imagine that somebody’s new and needs to know my mom’s name, like they’re ready to invest all the way in this operation. “Now who’s Aino? And what’d I miss?”

The Pink House is no longer pink, so that helps me let go a little. It was such a ridiculous color, and I didn’t choose it – just inherited it – but I loved it, the way you love some goofball quirk in one of your nearest and dearest. Like the way my mom uses the Finnish pronunciation of the letter “y” whenever she says the word “mystery”, so it comes out sounding like something not too far from “moosetery”. “That’s mooseterious!” It’s a respectable sage green now, with cream trim. All of the inside walls are white (except for the kitchen - the kitchen is pale blue), and the wood floors have been stained dark to cover all of the imperfections. (Hat tip to Lucy, the Rottweiler who lived there briefly before I moved in, who smelled my fear and decided she was against me, fucking up my home away from home. I spent the two months that comprised her reign of terror at my boyfriend’s place, wishing she would go away. And then Kristen moved to NY and Lucy found a new home and I moved in.) (In your face, Lucy.) Goodbye pea green living room, orange & white & blue kitchen, red bedroom, blue bedroom, emerald green bathroom. Goodbye, silly floors, with your tiny nails that kept popping up to stab us in the foot. It looks pretty, but I almost don’t know it any more.

And then there was the renter, and the terrible thing.

He stopped paying his rent a month before he left town without warning. I called and talked to him before he left, and tried to work out a deal. I mean, we were clearly going to get stiffed, but I thought he might make a little more good-faith effort if I was cool and understanding. (Yeah.) And after he left, a friend of his moved in and squatted there. So we evicted him. Them.

We got a call from a friend of the family, Mark*, who was going to do some work on the place before we put it on the market. They’d vandalized it. They went to town.

*If you read the story “Convoy”, Mark is Irving. Irving changed his name to Mark long ago to woo a lady. It worked. They’re still married.

Mark painted over the worst stuff before we could see it, with whatever he had at hand, but it was still shocking to see what had happened. In the kitchen, in the bedrooms, in the hallway, bathroom, basement, everywhere. Black….spray paint, I guess. I don’t know. The thin paint bandage applied on top looked as horrifying as whatever was beneath it – a bright, nauseating surgical green. So you couldn’t see what they’d painted. You could just see black masses of paint lurking beneath the green bandages, with black “blood” dripping down the wall beneath the main injuries.

It almost doesn’t matter how it looked, although it looked gruesome. It’s how it felt, that’s the unforgettable thing. Gut-twisting. Something violent hung in the air, still, a kind of psychic odor, like the intention of the vandals kept refreshing itself, was still active. And right – it WAS still happening. This, in fact, was opening night. The intent of the vandalism wouldn’t have been complete until we saw it, the people it was meant for. Well, congratulations, fellas. It did just what you wanted it to do. I wandered around from room to room, agape, tears falling. My precious house. I used to kiss the walls when I lived there, I loved it so much. I would pat the walls sometimes, idly, affectionately, like the house was some giant beloved beast, a family member of sorts. And here it was, taunted, beaten, wounded.

The house was a living thing, it did have its own consciousness. I won’t listen to anyone who tells me differently. I felt so protected in that house, and more, what’s more, I was healed by that house. My life was so chaotic before I moved in, and then something quieted in me, something stopped fighting. Before I lived in the Pink House, I didn’t think I deserved a good and happy life, so I did whatever I could to prevent that from happening. I sabotaged myself whenever I could. Practically kept a gun in my desk and pulled it out and shot myself in the foot every Tuesday, preventatively. Landed myself in jail, even. But the Pink House took me in and whispered things to me beneath my hearing, and something in me relaxed and began to nod along, concurring. (I know it wasn’t just the house. It was the people near me, loving me so well, and it was time, and it was some kind of readiness within me. But it was also the house.)

I don’t have that kind of relationship with the house I live in now. It’s pretty, my house, now. It’s too big. It’s indifferent. It’s too young – it doesn’t have presence yet. It doesn’t know what it’s doing. And we haven’t filled it and adorned it and taken care of it properly. Like I said, it’s too big, and we’ve been too busy. It’s not responsive, because it just isn’t alive yet. It isn’t anything. I feel almost nothing for this place. It’s palatial and it’s empty. There’s something false about it. The floors aren’t hardwood, they’re laminate. The fireplace, it’s gas. You can turn it on and there’s heat, but there aren’t any burning logs. That fire isn’t real. I don’t want to live here forever. I want to love a house the way I loved the Pink House. Can that happen twice in a lifetime? If it can, then I bless this whole world and kiss it the way I kissed the Pink House, because that would be more magic than my brain can currently wrap around.

So, that's it. It's not mine any more. I hope you're happy there, person, but you won't be as happy as I was. If you are, I almost don't want to know about it.

still, BASTARDS!!! it is a thing to mourn, no doubt.