I just found out that one Thomas Ashley-Farrand just passed away. Well, sir, here's an extended toast to what you came to teach us, and in the meantime, I've circled around a mala in your honor.

When I was young, mantras seemed...well, this was not an attractive practice to me. I imagined the people who did mantras to be spaced-out, fern-bar-frequenting, white-tunic-wearing California hippies. And yes, I grew up around these people, near them, but my own family prided itself on being the intellectual wing of spiritual kooktown, if you will. The drone of a mantra seemed to me like it drained your intelligence and free will right out through your mouth. Like I said, I was young, and vulnerable to cliche.

Magic old words, bona-fide abracadabras that chimed out of primordial not-nothingness straight into the finely-tuned ears of the ancient rishis. Psst. Hey. Psst. Would you like a magic key? Would you like another one? How about another one? How about another one? We can go all day like this. We can and we will. Why not? It's the least we can do for you. There you are, stuck. It's comical pitiful tragical. Can't stand to watch it anymore. We're throwing you a bone. We're throwing you a thousand bones. Better than bones. They're keys, like we said. But you have to turn them and turn them and turn them, and slowly something will unlock and unlock and unlock more and then more.

Perhaps you saw that lovely creature I have in a position of honor there up on the sidebar. Lakshmi. I'm following her trail right now, around and around my mala. Let me tell you a little bit about her. So, Lakshmi represents bounty in all its forms. Beauty and grace and wealth and...uh...you know what it is? You know the real reason I'm working with this particular mantra of hers? Oh, blush, damn it, I'm really maybe going to tell you. It's going to make me look silly. (Transparency! yells Mr. Ashley-Farrand from beyond the grave.) (Yes, sir.) (Ach.) So, he said that this one particular mantra is to...[blush]...[die]..."Invoke and Eventually Become the Abundance of the Universe Itself." Ahem. He said that the appearance of Lakshmi wiped all cares from the minds of those who first beheld her, and that this mantra...oh, hang on. I'm just going to quote it, skipping a little up top.

Vishnu [Lakshmi's sweetheart -T.R.] spoke these words in the story: "God's love, through whatever door it comes, is the end of all desire and yearning." The highest abundance is Love. If you feel that your true inner nature is one with the loving, abundant nature of Lakshmi, that you want to bring an abundantly satisfied state of mind to every person and thing you encounter, these two mantras [same mantra with a slight variation depending on whether you're above or below the age of 29 - T.R.] can begin the process of your transformation into such a bountiful and beneficent state.

Well, who wouldn't want that? And, damn it, I do feel that way. I've always been exceedingly lucky, and for whatever reason, I've always been able to make people feel better. I don't know why. It's just true. And I'm going through some kind of profound life change and I thought, well, this is something incredibly positive upon which I can hang my hat awhile.

So I'm going for something called Mantra Siddhi. After years of observation back in old India, it began to appear that 125,000 repetitions of a mantra is enough turnings of the key to make something special happen wherein the power of the particular mantra really sinks into you and becomes your own. You absorb it deeply, it becomes permanently lodged in you. And if you keep going, the effect of the mantra is magnified and spills out onto others as well. I can share the wealth, as it were. So that's just what I'm doing. I have a plan, I have a timeline, I'm underway. I'll be there within a year, maybe a little quicker. And then I'm going to absorb another one, and another one, and I think that I'll just be insatiable for these magic keys. It's the nicest path that I'm falling along. And I owe all of it to Thomas Ashley-Farrand, who sang the praises of mantra in the key that I could really hear, the key that spoke to me.

I can't imagine why everyone alive doesn't find their own key like this.

Safe and happy travels to you, Mr. Ashley-Farrand. Thank you. 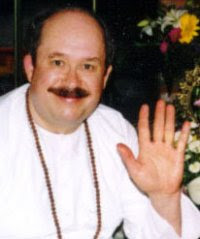 I dare you to note that he's wearing a white tunic, here.
Posted by Tina Rowley at 11:53 PM

Working with only a superficial knowledge of the subject, I hesitantly ask: what is your mantra? In phonetics, I guess.

Oh, right. I was going to include that. Share the wealth and such. It's this:


If this were a mantra that were directly given to me by a teacher/guru, I'd keep it to myself. (I have one of those, for my ears only, but it's on the back burner right now.)

Funny, I too felt silly and embarrassed when I first started chanting. Amazing results have a way of washing that silly embarrassment away, don't they?