a snowball's chance in finland, or, dark days

Uh to the motherfucking oh. It didn't snow in Finland for Christmas this year. This is what they got instead. 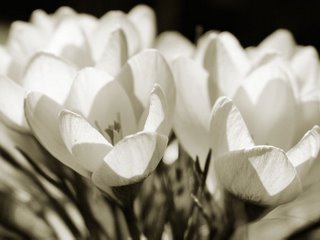 Crocuses. This has never happened before. Also, apparently 22 hours a day of darkness is ultra-uber-dark without snow for whatever light there is to bounce off of.

And you got your giant ice shelf that broke off into the sea there. (Thanks to Jason Grote for the tip-off.) So, looking good. It's looking good. We're looking great. Our friend Neville in Australia used to walk around muttering, "Dark days, dark days." Word, Neville.

On the bright side, in hair news, I ditched the zero and got with a hero. Old hairstylist? Babe, I have left you. This not only means that I have a fine new haircut - this means that I don't have to be Zelig* any more. I have been Zelig with more hairstylists than I care to admit. They've been these loud obnoxious party girls, and I've felt this compulsion to kind of ape their brassy loud blah blah when I've been in their chairs. I was unconsciously working on the hypothesis that they would give a better haircut to someone they relate to. It was exhausting. (Confidential to the hairstylist of 2001: Your downstairs neighbor is actually a SAINT.) Not only is my new hairstylist sane and charming, she's also incredibly fastidious. And I can just be myself. My bachelor days are over.


So there we go. We may all be up to our necks in seawater soon, but my head will look great.
Posted by Tina Rowley at 10:29 PM

Damn. Nothing scares me like global warming. Nothing. I can't even bring myself to watch "An Inconvenient Truth." I'm scared! Ugh.

That's cool about your hair, though.

that's so great about your hair. take a picture and show us. hopefully all this global warming won't make it frizzy. i hate that! miss you. xo.

Yes. Give a picture. And a call! I love you and miss you.