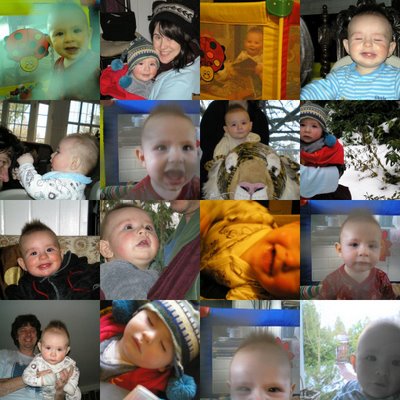 Seven and a half months on this earth. Friends, he is getting the hang of it. All sorts of things are underway. First, I draw your attention to the photo in the lower left hand corner. That's the official shot of Finn Rowley, Space Cadet. Dave flies him around and he reports for duty. He's a gentleman space cadet because he's always floating around looking for ladies to assist. He hovers over ladies' heads and says, "Excuse me, lady, are you in need of assistance? You are? Well...I'm taking my lunch break now.....also, often after lunch I have a nap. Excuse me." And he floats away.

He's a man of three teeth. Two below, one above. He's a man who's working on crawling, but once he gets himself on all fours, he's like, pardon me while I pause for a downward dog. Yoga is my passion, ma'am. He's a fellow whose hands sneak their way to the upper rim of his playpen before he struggles like a nutjob to pull himself to standing. He can do it. For a second. And then he tips over in what looks at first glance to be the Agony of Defeat. But then he's just lying there blankly considering his next move. Pas de problem.

I was feeding him some applesauce tonight and he said, "Bbbbbbba bbbbba bbbbbbba bbbmmma mmmmaa mmmmma mmmmmma mmmmmmmmma," and my heart stopped. I was like, play it cool, lady. Play it cool. That sounded like mama. But don't have a heart attack. He's just making noises. And then he did it again and I started pretty much vogueing. I pointed to myself and squared my hands around my face all, MAMA? DID YOU SAY MAMA? I'm MAMA. MAMA, that's this lady right here. I mean...you know....whatever...have some applesauce. It's cool.

I should be asleep. I'm like a crazy person here blogging for you. I'm exhausted. Finn is glorious in the extreme, but he also kicks my ass all day long. Not metaphorically, although that, too. I'm talking about getting punched and kicked and headbutted and bitten on the toe and having my hair yanked and my nose ripped off and my ear brutally examined to death. When evening falls, Dave and I stumble around like slit-eyed zombies while Finn is still merrily fighting for his right to party. We laughed until we cried the other night as we tried to calm him down to go to sleep. He was on the bed kicking his legs and squealing, and I was attempting to give him a massage and saying, shhh, shhhh, it's bedtime. Time to go to sleep. And it had so little effect that we likened it to going into a giant football stadium full of screaming fans and walking around making that two-handed, palms-down, take-it-easy gesture and murmuring to people randomly, "Okay...okay...let's get some sleep now. That's enough, everybody. Night night now. Shhh. Calm down." Ah, lord, we thought that was funny.

He's a happy guy, our young space cadet. We thank our lucky stars.

MAMA! Isn't that the most fabulous moment! When Jackson first said it... mmm...mmm...maa. I was just so taken! It was like for the first time in my whole lfe, I finaly have a name.

Lord have mercy- the tiny toothed sweetheart. The Little Prince/Party Animal. Beloved boy of Mama.
I love your writing. It BLOWS my mind. I'm so glad you wrote a book.