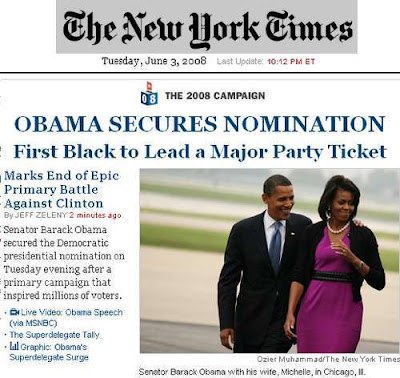 Thrilling! Goose bumps, goose bumps. We're so close, now. Lots of work to be done, looking forward to doing my part. One thing I'm excited about is that Dave and I agreed to host an Obama Fellow at some point later in the year. I think it will be great to have someone staying in the house who's working out there in the field. It'll be energizing.
President Obama. President Barack Obama. "President Obama said today...."
Oh, my word!
This can happen.
James Clyburn pointed out on tv today that when Obama gives his speech at the convention, it will be 45 years to the day from Martin Luther King's "I have a dream" speech. That's where today's goose bumps began. I love being alive for this historic day. First black president(ial nominee), my favorite candidate ever. I don't know what's icing and what's cake but there's a surfeit of both, here. It's cake city!
Posted by Tina Rowley at 1:00 AM

I'm there, yo. Feel the history!

We took Linus to the Obama rally in Albany back before the Oregon primary in part so that years from now he can say that he saw the first black president in person. I want him to feel a personal connection to that piece of history.

Fingers crossed for whipped cream & cherries on top in November.

Yeah, I know cherries on top are on sundaes - but I think they'd be quite good on a Tuesday, too.

This is the first year I ever actually cared enough to vote in a primary.