yes we did and also yes we are 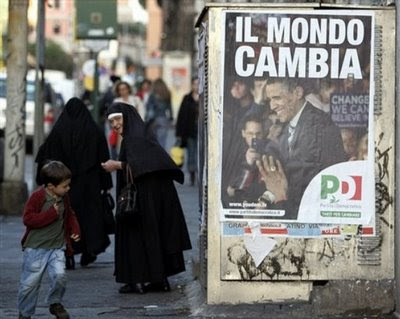 photo lifted from the delightful site yes we can hold babies

First, AAAAAAAAAA! The joy of that moment, when the tv said Barack Obama Elected President...I've never felt/witnessed/shared in anything like it. Jumping up and down and sobbing and laughing and feeling like the sky broke open revealing some new better impossible beautiful sky. A giant world joy all at once, the whole world popping like champagne, like the Christmasiest Christmas Eve Christmas morning holy holy all over the Earth shared glory. Merry Christmas! You, boy! Run and fetch the fattest goose out of that shop! There's ten thousand dollars for you!

Yes. Afterglow. Fantastic. Marred by Prop 8 archaic bastards. God forbid evolution happen too fast in this country. Somebody has to do the job to hold us back. We loved our protruding foreheads! Standing erect is overrated. We were warmer when we had our own fur.

So. So I'm breaking my weird old long blog silence to tell you also* that I'm pregnant. Just 'bout 8 weeks. Yes! Yes, we did. Yes, we are. And I've had my hcg levels checked, and they're nice and high, and I had an ultrasound and that little baby was just the right size with just the right heartbeat. Poom poom poom, you could see it going there, right on the screen. Bap bap bap. Someone's in there, and someone's got it going on.

*Sarah Palin killed also. She shot it from a helicopter.

I was like, let's wait this time, Tina. Let's wait until 12 weeks to tell. But 12 weeks, schmelve schmeeks, I can't do it. I'm a VAULT that I held out this long. My old policy of glasnost or perestroika, whichever one is openness, that has to be reinstated. If things go well, I tell. If things go ill, I tell. I'm a teller! I'm a bank teller and you guys can have all the money out of the vault and you didn't even try and rob me. I'm that kind of teller. I'm a totally gung-ho pro-active co-operator.

Also: a drooler. And a gagger. A heaver. An up-chucker. A bloodhound who will need you to turn on the fan if you're planning on slicing that apple. A tired-unto-dying-of-Saltines-er. An I-got-a-craving-for-banana-cream-pie-five-minutes-later-who-the-fuck-had-the-stupid-idea-to-buy-a-pie-er. Because it can't have been me.

We are very excited and hopeful and nervous. We had barely barely made the decision to try again when some baby barreled in through a two-inch crack in the door. Ding dong, I wonder who's at the door, is it an encyclopedia salesman, let's see OH MY GOD THEY'RE* IN THE HOUSE AND THEY'RE DRAWING A BATH AND ORDERING A PIZZA HOW THE HELL DID THEY DO THAT SO FAST?! Hey mom. Pass me that rubber duck. Thanks. And shut the door. Also I will need to borrow 20 bucks for the pizza.

*It isn't twins. But he or she is too unwieldy, and I'm not jinxing anything.

So, whoo! Baby born in an Obama/Biden world, phew. Now let's get our asses to the second trimester post haste. This trimester blows. It also blows a trumpet, because we're on our way to a Rowley quorum. (6/20/09, give or take a whatever.) But morning sickness just purely blows.

However, screw that. I end on a positive note. C major, mofos!
Posted by Tina Rowley at 10:06 PM

Email ThisBlogThis!Share to TwitterShare to FacebookShare to Pinterest
Labels: barack obama ladies and gentlemen, declaration of pregnependence, here we go

I was just thinking of blogging and Barack and I thought of you. I had to stop reading here for awhile because I love Hillary Clinton and the Obama Rama over here was starting to annoy me. But when I filled in that little oval next to Barack and Joe's names on Tuesday, my eyes unexpectedly filled with tears. It was pretty darn awesome to get to vote for a black man, and now, I have to tell you, I'm glad he won. Way to have foresight.

Oh Yeah, CONGRATULATIONS on the bun in the oven, the baby in the bakery! That is so very cool.

Congrats! Glad he/she/they busted you out of writing jail, too!

I am soooooooo happy for you, and for me, getting the president we want, and you writing again. I have missed your writing so! You are awesome, and all that hypnobirthing coach crap about babies coming at the "perfect appropriate time"... well, I'm starting to buy it. I think your baby is so beautiful that s/he will inspire those f**ks in CA to overturn Prop 8 at the next available chance. Whatever that means. Yea! You go, Team Rowley/Obama/World!

I am overflowing with happiness for you and and and also speechless...

Thrilled for you babe, not so much the pukey/sicky stuff but the growing another human being thing, delighted!

Too wonderful for words! Congrats on all fronts!

Congrats! That's fabulous news. Hang in there with the morning sickness...the reward will truly be great. :)

So, I'm late to the game, but this was just too good not to be repeated:

"Yes. Afterglow. Fantastic. Marred by Prop 8 archaic bastards. God forbid evolution happen too fast in this country. Somebody has to do the job to hold us back. We loved our protruding foreheads! Standing erect is overrated. We were warmer when we had our own fur."

I'm totally stealing that for my own use someday.